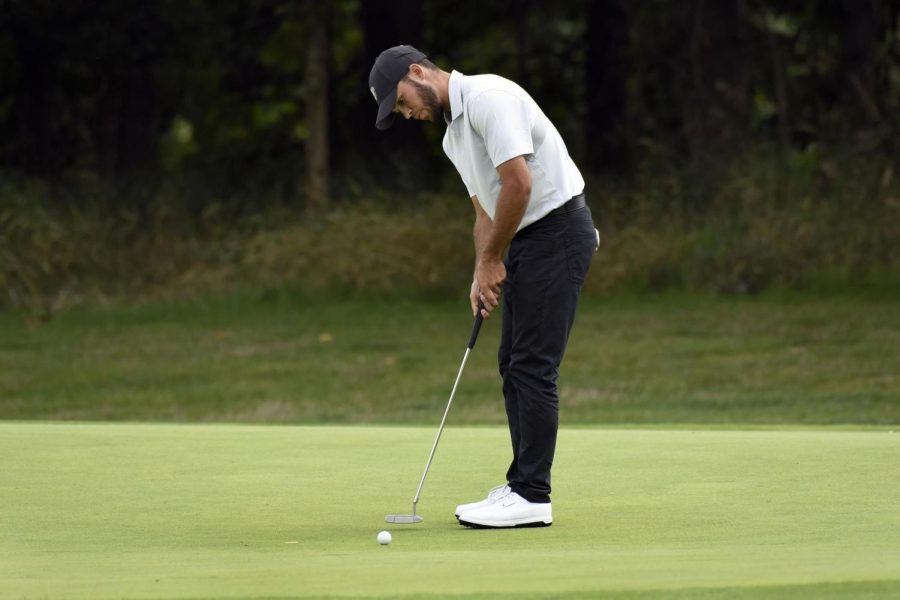 Thomas Giroux at the United States Amateur Four-Ball Championship in May.

On Sept. 25-26 at the Oakland University Golf and Learning Center, the current team battled the former team to a stalemate in 10 vs.10 match sets. The two-day tournament was held on the R&S Sharf Golf Course on day one, and the Katke-Cousins Golf course on day two. Day one was notable for the abundance of rainfall and wind throughout the day, leaving competitors with watered-down greens, low temperatures, and slick conditions. Day two was the polar opposite of the previous outing, with little wind and spring-like daylight.

Even with the difference in weather, the athletes battled through to through the conditions in the name of competition. For the men’s team, this was a chance to show the capabilities of university athletics in the 2021-22 season. For the alumni, it was a chance to show the new team that their names are recorded in the Oakland University athletics for a reason and records go through them.

The Alumni team, lead by tournament organizer Chad Elliott, featured a collection of Oakland University greats such as Anthony Sorentino and Chris Handy as they faced off against Senior Owen Tucci and the Golden Grizzlies.

Elliott, a 2007 graduate, scored 63 en route to a match play route against freshman Gavin Keough. Elliott, who earned all-conference honors on the Golden Grizzly Men’s Golf Team and was inducted into the OU Hall of Honors, created this miniature tournament and looks to be a means to showcase both alumni and current student-athletes.

Though less experienced, the current OU players more than held their own, battling back from being down 5-2 to even the series in total 5-5.

The Elliott Cup is the namesake of Chad Elliott, a longtime Golden Grizzly, whose parents donated the iconic Elliott Tower, which is a centerpiece and unifier for Oakland University.

Though there wasn’t a decisive winner, the Oakland University men’s golf team proved their worth by playing and matching the Alumni. Their play and determination shows the strength and resolve that makes an Oakland University Golden Grizzly, a standard that was set by the Alumni. This season is going to be a big one, and led by Coach Pumford, the OU men’s golf team is in good hands.

Their next tournament is Oct. 4 against Cleveland State, and it’s safe to say the team is warmed up and ready to go.