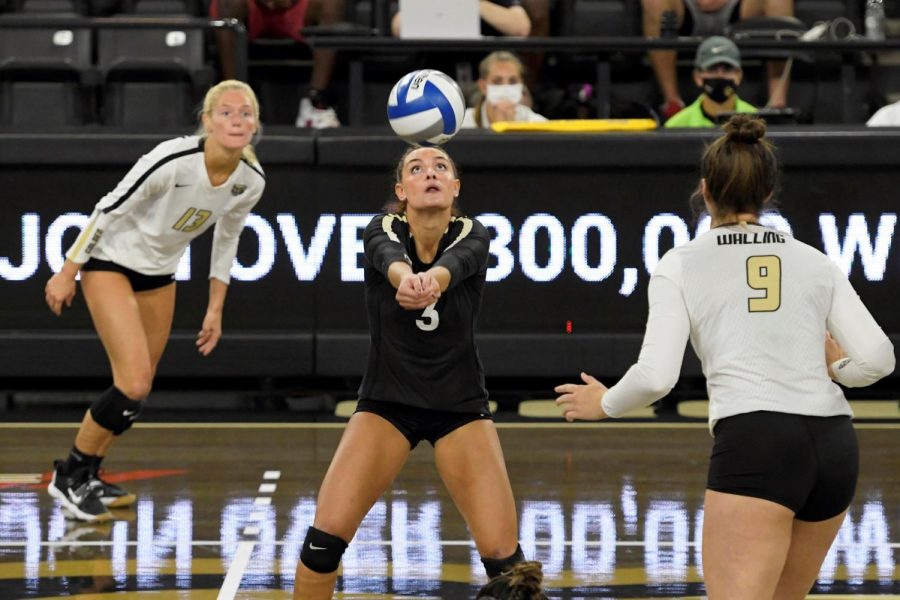 Lindsay Wightman broke the school record for most career digs against Central Michigan in the Green and White Classic.

The Golden Grizzlies split the first two of three matches last weekend in the Green and White Classic.

The Oakland University volleyball team finished up their non-conference schedule with a packed double-header last Friday against Central Michigan and Michigan State in the Green and White Classic Tournament in East Lansing.

Head Coach Rob Beam expected quite the challenge, but planned to meet it with excitement and fervor.

“This is an outstanding weekend of volleyball for us,” he said. “Both Central Michigan and Bowling Green were selected as the preseason favorites to win their respective divisions in the MAC. Additionally, Michigan State is as physical at the net as any team in the country. Each of these teams is experienced, well-coached and will test us in their own ways. I am excited for the challenge ahead.”

“Challenge” was definitely the right word for those two games, as the Grizzlies looked to take down two very solid teams. Central Michigan boasts a record of 5-4 and a tournament sweep at the Chippewa Invitational. Although CMU fell to DePaul University in straight sets during the Bradley Invitational — with DePaul being a team that the Grizzlies defeated in four sets last weekend — CMU is bolstered by two dynamic players in freshman libero Aly Gurtiza and senior outside hitter Savannah Thompson.

Michigan State, despite not playing since Sept. 4 due to match cancellations, boasted a 4-2 record and two talented players in seniors Naya Gros and Rebecka Poljan. Gros leads the nation in blocks per set with 1.94 and Poljan ranks third in the nation with a hitting percentage of .500.

The first game against Central Michigan was an all-out war that ended with the Golden Grizzlies coming out on top after five sets in a 3-2 victory. Although the Grizzlies would give up the first set in a 25-22 loss, they would roar back and mount a great run that would see them take the next two sets with totals of 25-21 and 25-23 respectively.

CMU would then find their footing and win the fourth set with a score of 25-14, but would eventually lose the fifth set in a nailbiter with a score of 15-13. After a break to recharge, the Golden Grizzlies would gear up to face the Spartans next.

Senior defensive specialist Lindsay Wightman broke the school record for most career digs in the victory.

After giving their all in the five sets against the Chippewas, the Golden Grizzlies would fall in three straight sets to the Spartans after giving a valiant effort. The first set would come down to the wire as both teams picked apart holes in the defense, but the Spartans would eventually edge the Grizzlies out for a 26-24 victory. The next set ended in a 25-13 win for the Spartans, as well. The Grizzlies would show a lot of heart and give it their all in the final set but came up short in a 25-20 loss to the Spartans, ending the day with a record of 1-1.

The Golden Grizzlies volleyball team returned to the court on Sunday against Bowling Green to finish up the weekend, where they were swept by the Falcons to wrap up non-conference play. Conference play begins Friday, Sept. 24 at 6 p.m. when they travel to take on Youngstown State.