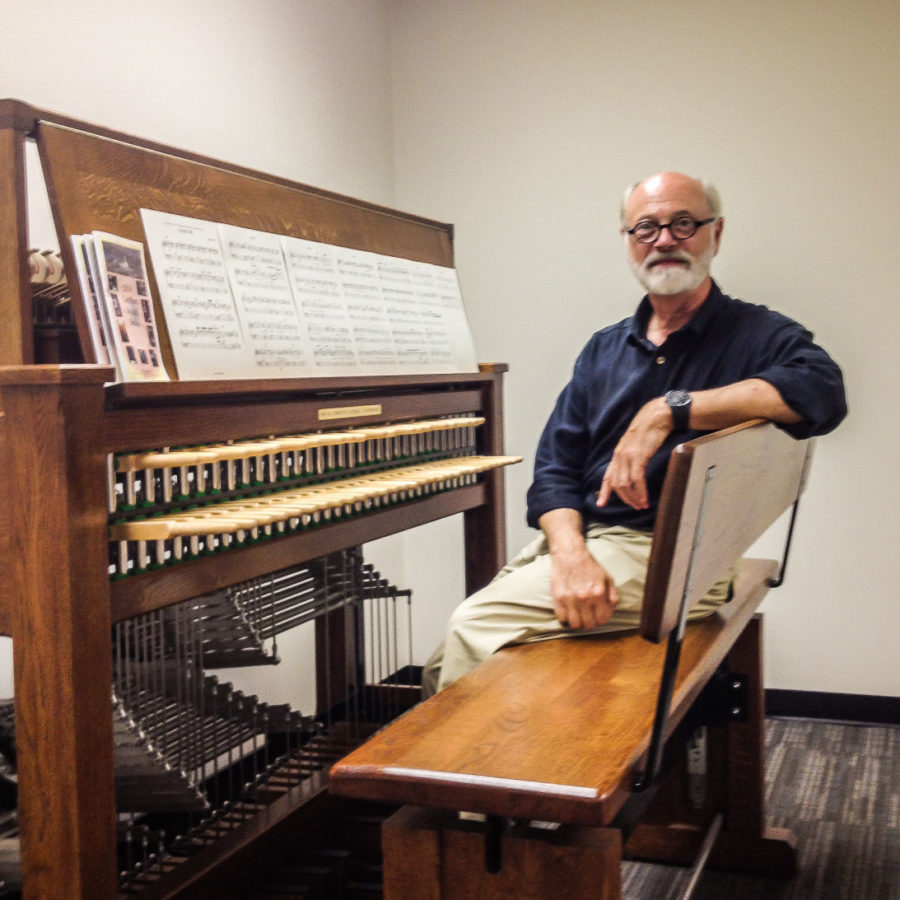 Dennis Curry sits on a wooden bench in a room that is empty save six boxes, a chair, and a practice keyboard for the world’s heaviest instrument.

It’s called a carillon, and there’s one in Elliott Tower. You can play it dynamically: softly, or, of course, loudly, depending on how hard you hit the batons. He hit it hard. Right now, the low C is merely a rattle.

Curry is an automotive engineer by day, and will be Oakland University’s carillonneur, but not always at night.

“This operates almost like a piano. You get sharps and flats,” Curry says. “You play with your feet as well.” He demonstrates.

It is safe to say that he believes in Elliott Tower.

Nancy Elliott’s son was playing golf at Grand Valley State University, and she heard the bells of the Beckering Family Carillon Tower.

“So, she heard that in the distance and thought, ‘Wow, that is great. That’s what Oakland needs.’ And in fact she’s right. The tower is going to help transform the community. It’s going to build a community.”

The dedication of Elliott Tower is Sept. 19 at 4 p.m. Curry says it will be a big deal.

There will be speeches and thank you’s, and one thing which Curry seems more excited about:

“There will be a musical offering.”

Curry will be up in the tower and the OU Brass Band will be on the ground.

“And we’ll try to play together,” says Curry. “We’ll see how that works.”

Provost James Lentini, who holds a doctorate in music, has composed a piece for the opening. It is called “Ulysses’ Sail.”

“A sail is one of the icons of Oakland University,” Curry says, speaking of the logo. “And Ulysses’ boat’s sail carried him all over the place, and this was Matilda Dodge Wilson’s favorite story. The story of The Odyssey, of Ulysses.”

Curry will give the first public performance of the piece at the dedication. That’s not all.

“We have a surprise at the very end of the thing, and I won’t give you details, but stay tuned, there will be a special surprise for the Elliott’s.”

This is the last carillon by the 350 year old Royal Bellfoundry of Petit & Fritsen, a Dutch company that goes back 16 generations. They were bought out by a rival, said Curry.

Elliott Tower is 151 feet tall. The same height as the Statue of Liberty.

“What the Elliott’s have done, what the donors have done, is created a landmark for the university. It’s the focal point, now,” says Tim Verdin of the Verdin Company, who installed the carillon and the clock. He says it’s the most recognizable thing on eastbound University Drive.

But it’s not just a sight.

“They’ll see something,” says Curry. “But now, it’s speaking. It’s going to be the voice of the university.”