Remembering History: On the removal of the Robert E. Lee statue 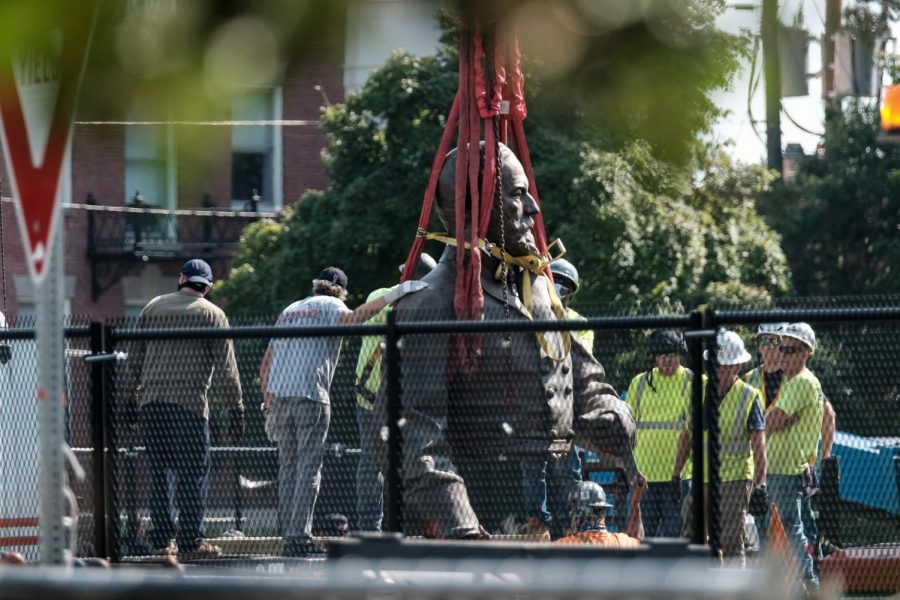 Workers dismantle the head of the statue of Robert E. Lee in Richmond, Virginia on Wednesday, September 8, 2021. Its removal followed a yearlong legal suit in the Virginia Supreme Court.

As reported by the Daily Wire, on Sept. 8 the Virginian government removed the largest Confederate statue in the United States (U.S.) in Richmond. This removal was facilitated by the end of a yearlong legal suit in the Virginia Supreme Court which challenged the legality of governmental removal of the statue.

I comprehend the arguments put forth for the removal of the statue. Robert E. Lee led the army of the Confederate States of America until the end of the Civil War, which fought to ensure the continued enslavement of Black people in the United States. This was a secessionist movement that disregarded the foundational principles of the U.S., and I am glad that the Union was able to wipe this disgraceful political entity from existence.

My view on this issue is that the statue should not be taken down. As political commentators such as Ben Shapiro and Condoleezza Rice, I believe in the idea of “keeping history in front of us.” Americans should be forced to confront history, to understand time periods in which someone such as Robert E. Lee was respected, even though he held these horrible views and fought for such horrible things.

“If you’re going to remove the iconography of the past, it should be done in a sort of, I would say, solemn fashion. It should be done very seriously,” Ben Shapiro said in his Sept. 9 podcast. “You saw one of the people taking this thing down, putting up the Black Lives Matter fist. Now you can say that maybe the statute should be taken down, but replacing it with the ideology of Black Lives Matter, which is that America is invariably racist, not only conflicts with the actual imagery, which is a Black man taking down a statue of a Confederate general, but also does not bespeak the argument for white supremacy in the United States in 2021.”

I grow uncomfortable when people ‒‒ such as Ralph Northam, Governor of Virginia ‒‒ move to sanitize history. To relegate a statue to a dusty backroom in a museum, when in all honesty most Americans do not regularly attend museums, lets people hide from the truth. I argue to not use tax dollars to maintain this statue — let it break down and be swept away with the winds of time.

Acknowledging that this statue still holds so much power over people in the U.S., especially in the light of America’s pursuit of the fulfillment of the ideals laid out in our founding documents, shows where the hearts of many people still lie — in the past. America is not perfect, but it is the most diverse, prosperous and free country in the world.

I fail to see the limiting principle for the situational burning of history. Both sides of the aisle, right and left, have taken this issue of local politics to a national level for what they perceive as political gain. The U.S. fought a Civil War in which an estimated 620,000 people, from both the north and the south, died. Since the end of the Civil War, civil rights in America have progressed steadily towards the fulfillment of the ideals found in the founding documents for all people.

Let the statues degrade to nothing, with the land reclaiming the traces of that damned failure of a rebel movement. People, myself included, will forget the past if they are not consistently faced with its consequences. In the end, this argument is not about the statues. It strikes to the fundamental nature of the U.S., and whether or not the ideas contained in the founding documents are truly worth pursuing.