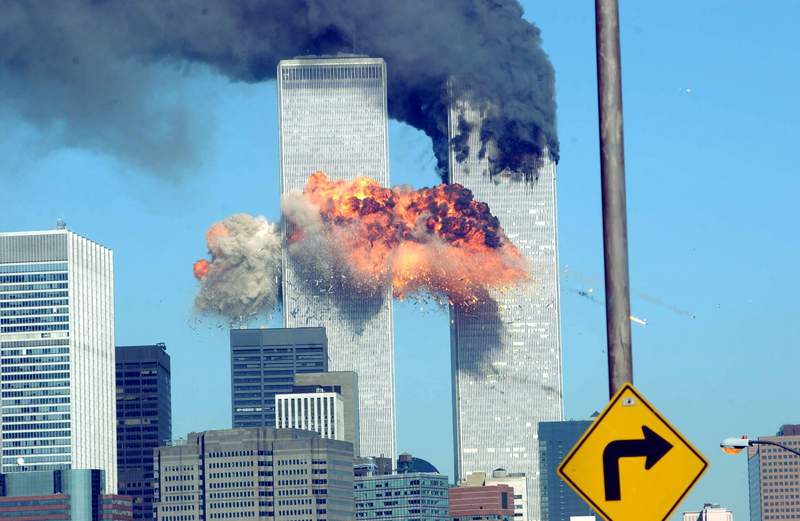 The World Trade Center towers burn after being hit by two planes on September 11, 2001.

On May 28, 1998, Osama Bin Laden conducted an interview with the ABC’s John Miller and his interpreter. In this interview Bin Laden asserted that the United States (U.S.) was a “paper tiger” due to the lack of a direct military response to a succession of attacks centered on the bombing of U.S. embassies in Kenya and Tanzania by Bin Laden’s Al-Qaeda terrorist group.

News of the attacks rippled across the nation in a wave of television and radio news segments, with Oakland University students becoming cognizant of the horrid destruction as they rushed to their morning class sessions, according to the Oakland Post’s archives.

Initial reactions from the students varied from shock and damaged frustration to inconvenience upon the sudden closure of campus. This closure of campus, the administration said, was done in order to protect the student body, faculty and all those who may come to OU’s campus during this time of uncertainty.

“Our decision was made primarily for the safety of our students, faculty and staff,” then University President Gary Russi said. “Until more concrete information is available about the nature and scope of the terrorist attacks out east, we did not want to take any chances with the OU community.”

After all, this terrorist attack constituted the largest attack on the continental U.S. since the surprise bombing of Pearl Harbor by imperial Japan during the Second World War. Students also began to develop opinions about how to react to the attacks and what the attack’s implications could be in the broader international political system.

“I feel that this won’t change the way we live,” Carmela Franco, a sophomore studying engineering and chemistry told the Post in September of 2001. “Knowing our president [George W. Bush], he will blame all of the nations that haven’t backed us up before, and this could be the beginning of World War III.”

“It really won’t change the way things work around here,” said Chris Duemling, a sophomore studying sociology. “There will be one week of panic and then things will go back to the way they are unless someone uses this as an excuse for paranoia.”

Many of OU’s current students were not alive or were young children when 9/11 happened and have but a fleeting recollection of the attacks themselves. What students do remember is how the U.S. changed in response to terrorist attacks on U.S. soil.

Things such as the “Patriot Act,” the Abu Ghraib blacksite prison and the long wait lines to undergo examination with the Transportation Security Administration (TSA)  for domestic U.S. travel have been life-long aspects of protecting the American homeland for those born post-2000. Perhaps, once the dust finally settles, the U.S. may be able to prove that we are “Paper Tigers” no more.

“It was scary that this [9/11] happened,”  Erin Liebner, a junior studying English told the Post in 2001. “But the truly scary thing is what will happen next.”