Updates from the picket line: Day 2 — solidarity on campus, a march through the heart of OU, bargaining update 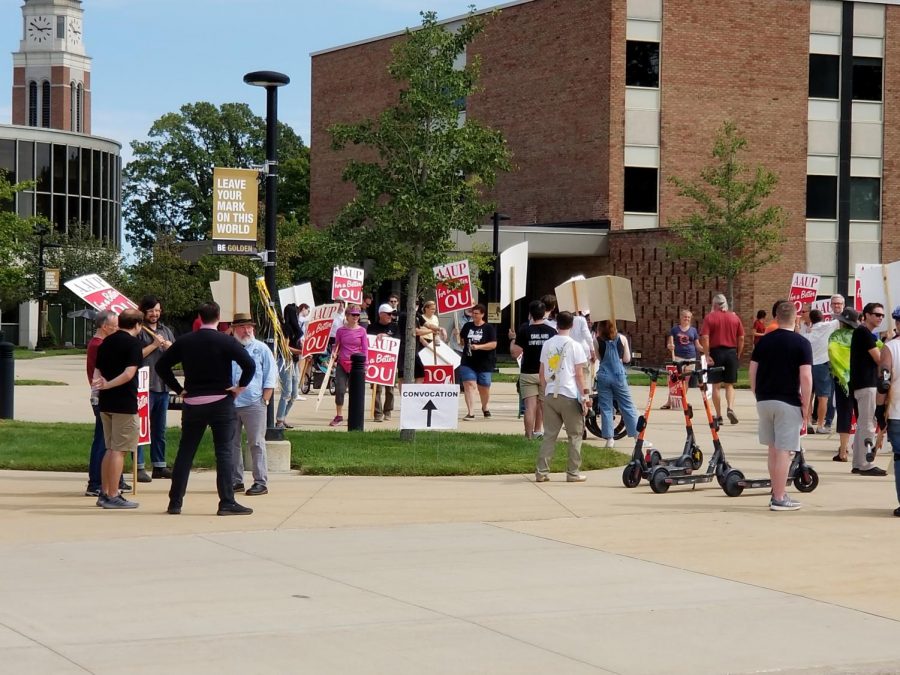 Picketers gathering between North and South Foundation Halls before their march through the heart of campus commenced.

Starting at 8 a.m. Friday — faculty and supporters including students, alumni and retirees picketed outside major entrances to the university. The story from the picket line was cross-campus solidarity, as student workers were present on the line and non-faculty campus employees showed their support via a parade of maintenance vans honking their horns.

“The mood is very upbeat, we have a tremendous amount of support from the students who have been out here who have brought us food and water and good wishes, which is meaningful and wonderful for all of us,” Oakland University Associate Professor of Political Science and Contract Officer for the Oakland University’s chapter of the American Association of University Professors (OU AAUP) Diane Hartmus said. “I’m impressed by the response from the cars that are driving by … cars, honking, thumbs up, solidarity [signs] out the window … it’s a very positive response, we feel that our message has clearly gotten out, and clearly resonated.”

Member of OU’s Student Congress (OUSC) and representative for the Oakland United Student Workers Coalition (OUSWC) Jeremy Johnson elaborated on why the presence of student workers was important on the picket line today.

“We recognize that we live in an intersectional world, the struggle that the [OU AAUP] is experiencing is the same one that student workers experience,” Johnson said. “… It’s all interconnected, it all speaks for itself. The only way to push back against it and claim some amount of collective power over the administration is to stand together and unite as the people that are employed by the university.”

For picketers, the day culminated in a long march through the heart of OU’s campus. Picketers from all entrances gathered between North and South Foundation Halls, then marched past the Oakland Center, through Elliott Tower and past Kresge Library.

The march came to an end when picketers coalesced around President of Oakland University’s chapter of the American Association of University Professors (OU AAUP) Karen Miller to hear her speak. Miller delivered a heartfelt address to picketers, expressing her gratitude for their support and encouraging them to enjoy their Labor Day weekend.

“This weekend is so workers can rest. So go get some rest, spend some time with your friends and your family this weekend,” Miller said. “Hopefully we won’t have to be out here Tuesday, but if we do, you’ll know where to find us.”

After a 16-hour day at the negotiating table yesterday, bargaining between OU’s administration and the OU AAUP has continued all day Friday. Reports from both sides indicate some progress was made, but there’s still work to do with key issues separating the sides.

For students, the start of the fall semester has been delayed until an agreement. The faculty’s contract expired midnight Wednesday and the OU AAUP authorized a work stoppage until an agreement is reached. The delay to the start of classes has caused some confusion among students. The situation has not been helped by unusual messages released from the administration throughout the week via the Campus Communication email broadcast system.

Faculty and student workers have criticized the communications as being designed to drive a wedge between OU AAUP faculty, students and non-faculty campus employees, saying that the communications are misleading and an abuse of the broadcast system.

“It is a disgusting abuse of the platform that OU has,” Johnson said. “… They have abused their power, especially because a lot of freshmen that have just come in are very confused about what’s going on … They should not be using the megaphone that they have that is inherent to their positions to confuse people, to pit them against each other.”

A veteran of seven bargaining teams, Associate Professor of Mechanical Engineering and member of the OU AAUP executive community Michael Latcha explains that using the broadcast system in such a way is not unprecedented once a work stoppage has occurred.

“These types of communications are actually fairly normal when it gets down to a job action,” Latcha said. “I was shocked at the level of detail that was in the message. Typically, Oakland does not negotiate in the press at all.”

Communications released for the administration this week have praised faculty for their commitment to the university, while also blaming the OU AAUP for being the reason why a contract agreement has not been reached.

This morning’s Campus Communication email specifically chastised the faculty bargaining team for not proceeding with bargaining after 16 hours of negotiations saying, “After more than 16 hours of bargaining yesterday, the issues dividing the faculty union and university administrators are minimal. Despite this and the mediator’s willingness to work through the night if necessary, union negotiators decided to extend an illegal strike and end the bargaining session.”

“We are, to use the current word for it, being gaslighted,” Latcha said.

As of writing this, the two sides are still far apart on issues including healthcare and special lecturers. Bargaining will continue throughout the weekend. While it is possible that a judge could order faculty back to work after Labor Day, picketing from faculty and their supporters will continue for as long as it takes for an agreement to be reached. Morale from picketers remains high.

“I’m just delighted at how much love we have had towards our efforts and how many people have come out to support us,” Miller said.

Of that support, alumni have made their presence felt. Two alums spoke on why it was important for them to be on the line picketing.

“I would not be where I’m at today without all the experiences I had with my professors at Oakland,” class of 2018 alumni Syed Murtaza said. “And solely [on behalf of] the staff and professors because [the] administration didn’t really bring anything to us. It was the professors that invested and put time into us, cared for us. And I think they should be paid for what they’ve been giving to the university. I don’t understand why [OU’s] administration gets these huge packages of benefits and wages while they’re not contributing anything labor wise. It’s the professors and the staff that contribute the most. The school’s [built] off the backs of professors, so it’s important for me to support the people who helped build me up.”

“I currently work as a school counselor in high school. And my passion has always been for education,” Class of 2016 alumni Stephanie Carle said. “I knew that’s where I would always work. So no matter what level that we teach or educate on, I like to support education, I want to support fair wages. And I want to support the professors who taught me and got me to where I am. And yeah, even though they’re at the college level, like I still support educators, so at all levels.”