Updates from the picket line: Faculty, students and OU retirees on the line 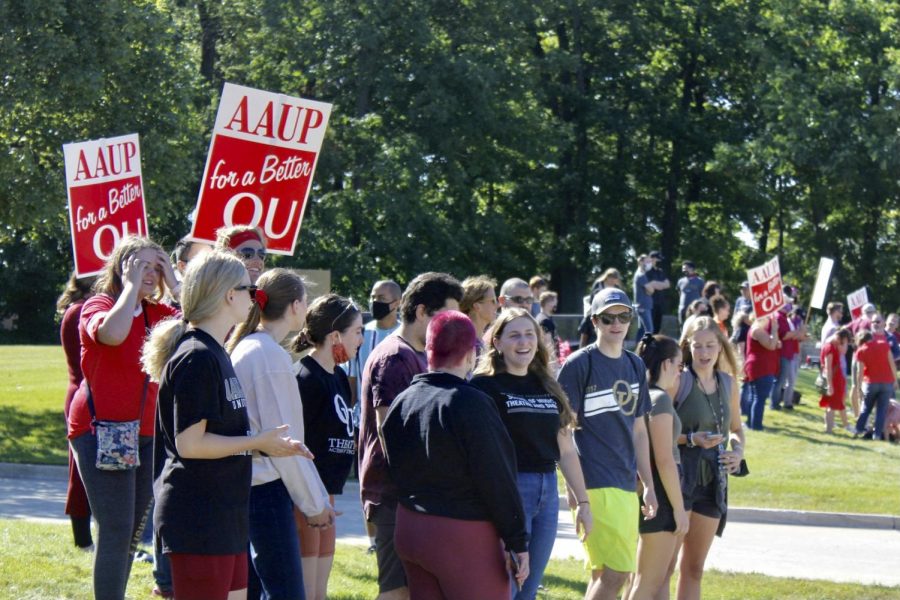 OU students, faculty and retirees gathered at the western entrance of the campus picketing.

Morale is high on the picket line this morning. Gathered near major entrances to the campus — faculty, students and OU retirees hoist signs reading “AAUP For A Better OU” into the late-summer sun. As beautiful as campus is this time of year, their presence is indicative of an ugly fight that’s taken place all summer behind the scenes.

Picketing began this morning at 8 a.m. in response to the current contract dispute between OU’s administration and the OU Chapter of the American Association of University Professors (OU AAUP). Last night the two parties failed to reach an agreement after roughly 13 hours of bargaining took place. OU AAUP authorized a work stoppage at 1 a.m. this morning after their contract expired at midnight. Students found out first thing this morning from a Campus Communication email and through emails sent via Moodle from their professors that classes have been postponed for the time being.

Returning to campus for what was supposed to be the first day of classes, students are heading to the lines seeking information about what has happened throughout the summer during negotiations. One such student was incoming freshman Andreas Herwig. He was surprised with what he heard and shared these thoughts.

One person informing students who approach the picket line is OU AAUP Vice President and Special Lecturer of Writing and Rhetoric Allison Bohn. According to her, these negotiations are about more than just a paycheck.

“[What students should understand] is that we’re bargaining for equity. We’re looking for respect from the university,” Bohn said. “And the way they show that after all the work that we’ve done during the pandemic is by giving us an equitable contract.”

OU AAUP and university administrators resumed negotiations at 10 a.m. this morning. It is possible that a judge will order professors back to the classroom. In the event that that happens, picketing by the union will continue until a new contract has been signed. Picketing will proceed throughout the day today.