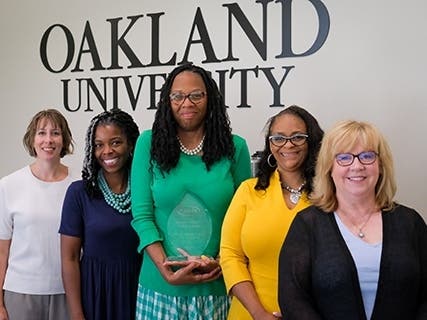 The award celebrates institutions whose programs “take a creative approach and have had a significant impact on the recruitment and retention of a diverse faculty and/or staff, foster engagement and provide education that builds inclusion,” per the website.

The training program originated at OU’s William Beaumont School of Medicine (OUWB). The OUWB project, called the Diversity Liaison program, was the framework for the main campus’ DA program that was initiated in 2018.

All academic search committees at OU must have a DA on their team. The program is a structured training process that prepares faculty to serve in the role of DA.

Usually, the training was conducted in-person. However, due to the onset of the COVID-19 pandemic, the program had to shift to an online format with zoom meetings and workshops.

“What makes the program effective, even though it’s now online, is it’s still high touch, meaning it’s very conversation-based, as opposed to being a flat training that you do on your own,” said Professor of Management Cynthia Miree-Coppin, Ph.D. “That conversation-based workshop instruction around unconscious bias is key to ensuring that people understand and are able to mitigate its effects.”

Unconscious bias — also called implicit bias — is an unsupported or prejudiced judgment in favor of or against a person, group or thing in comparison to another.

Associate Professor at OUWB and Provost Fellow for Faculty Diversity Jason Wasserman, Ph.D. shared his definition: “From my standpoint, unconscious bias is really quite an ordinary feature of human cognition where we make assumptions about things based on our experiences. The problem with doing that is our experiences are inevitably partial, so our judgments are often wrong, and we do it all the time.”

Besides educating faculty on unconscious bias, the program strives to increase the variation within the selection pool for hiring to diversify faculty. Diversity, explains Dr. Miree-Coppin, is not limited to race, ethnicity, gender or religion.

“When I say diversity, I mean, literally, difference. For example, if we’re talking about what diversity looks like in the library, well, that may look like a white male because everyone over there is not,” Dr. Miree-Coppin said. “It could also be research — bringing in people who look at things using different kinds of methodology.”

A third effort of the program is to foster inclusion. After recruiting diverse faculty, correspondingly, the program’s initiatives seek to retain that faculty.

“There’s no point in diversity if you don’t also have inclusion because if not, they’re going to come and leave,” said Dr. Wasserman. “We also have to build a welcoming, supportive environment where faculty feel appreciated and are fairly compensated for their work.”

The Inclusion Cultivates Excellence award also includes a monetary prize of $5,000 that will be donated to the Rabbi Richard G. and Bella Hirsch Faculty Endowment for Racial and Social Justice — created by President Ora Hirsch Pescovitz and named after her parents.