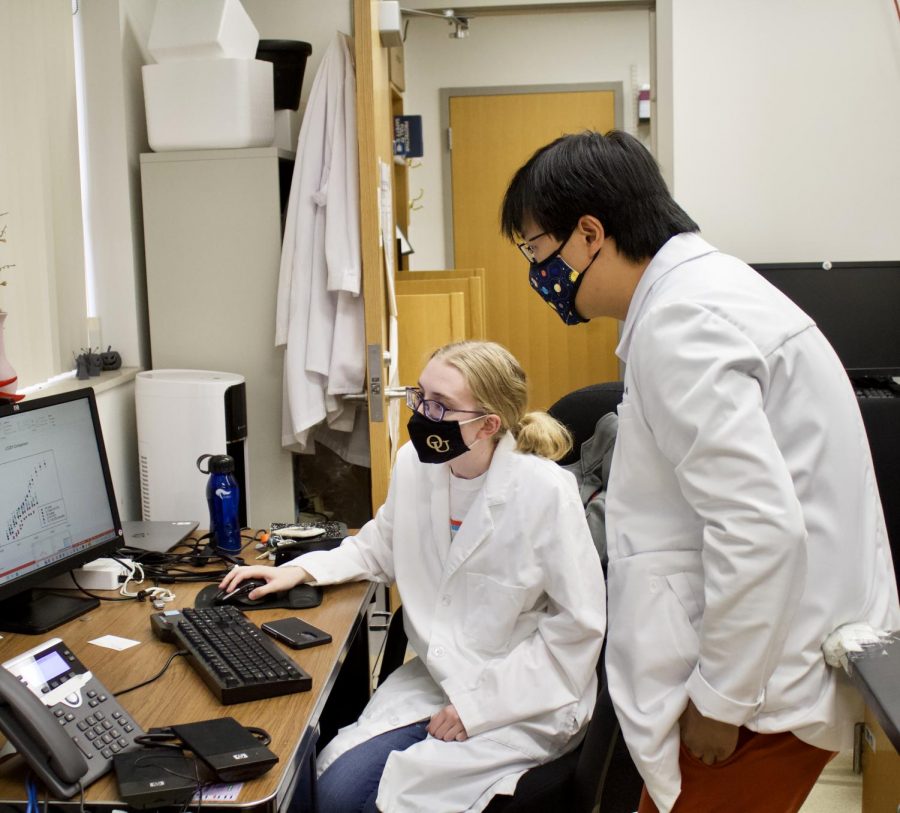 An OU professor and student working together in a lab. Ongoing faculty negotiations will impact classroom environments and professor-student interactions for the next five years.

On July 22, the OU chapter of the American Association of University Professors (AAUP) made a major motion in the ongoing faculty contract negotiations by bringing forth specific proposals including a 3.5% increase in salaries, paid parental leave, increased research fellowships and better benefits for special lecturers. As of writing, the administration has not responded to these proposals.

In August of 2020, amid the uncertainty of the COVID-19 pandemic, OU and the OU chapter of the American Association of University Professors (AAUP) agreed to a one-year extension of the 2015-2020 faculty agreement. That extension is set to expire at midnight on August 14, the administration and faculty have been engaged in negotiations since May to reach a new deal before then.

Assistant Vice President of Academic Human Resources Joi Cunningham is leading the administration during these negotiations. She was approached by The Post but respectfully declined to give an interview while negotiations were still ongoing. Cunningham did however provide the following statement.

“Through these faculty negotiations, we are working towards maximizing student success and maximizing the best return on their tuition dollars,” Cunningham said. “All of our proposals and responses to AAUP proposals are made with these concepts in mind and in light of the challenging budgetary times being encountered. We recognize that what we do is largely due to the talented faculty we have, and we value their contributions. Our goal is to obtain a contract that is both fair and in the best interests of the faculty, our students, the university and our community at-large.”

The general feeling heading into negotiations is that last year everyone understood the gravity of the COVID-19 pandemic and compromised for the best of the university by extending the old contract, but now it’s time to get the right deal done for the future.

“[Last year] we and the administration wanted to spend all of our energy doing the best we could in terms of figuring out how to make the university functional during [COVID-19],” President of the OU chapter of the AAUP and Associate Professor of History Karen Miller said. “All of us understood that … there were going to be at least semi-permanent changes made to the way we teach and the way students think about school … We were satisfied with the old contract in the sense that there were things that we disagreed with, and I’m sure there were things that the administration wanted to change, but they really paled in comparison to the larger concern — the immediacy of [COVID-19].”

A baseline for negotiations was established throughout May and June, with both sides agreeing to 18 articles from the prior contract being placed into the new agreement. Miller explains agreements early on in the bargaining process.

“We figure out first what we can agree about,” Miller said. “We go through article by article and talk about, yes, this one’s fine, nothing has to be changed … So all of that stuff gets signed off at the beginning. And so they tend to be non-controversial things that have been in the contract for ages … things that really have not created any kind of friction with the administration.”

From that initial point of agreement the two sides presented their concerns on non-economic issues like faculty wanting updated language concerning pronouns and expansion of groups protected from discrimination, as well as economic issues like improving processes for collection of dues, receiving backpay, workload policies and hiring.

The recurring theme between the two sides during this period was the AAUP wanting increased specificity in the language of the agreement and the administration working toward  “eliminating some undue complexities in the contract.” Basically each side posturing for what they deem to be necessary changes to language in the articles. Miller shed light on some faculty language concerns.

“For example, the questions of faculty dismissal … There actually is language in the contract that pretty specifically says how that happens. And [we] know what the process is, and that its language pretty much adheres to state and federal law about how you dismiss somebody,” Miller said. “But we’ve had two occasions in the last [decade] where faculty have been removed from campus [without] using those procedures. And so there has been this ongoing debate about what triggers the decision not to use the established procedures. And so we want that very explicit.”

Events at the end of June and beginning of July created some friction in negotiations. This was mainly due to the Board of Trustees approving a new budget and increased tuition. The AAUP criticized a single-year expenditure in the budget of $6,942,893 to replenish the university’s reserve funds, saying in their July 13 bargaining report “It is our understanding that the decision to return this full amount to reserves in a single year, rather than using it for current needs, constitutes just that, a choice made by Oakland.”

The AAUP wants this new contract to acknowledge their commitment and sacrifice for the university during the pandemic. The union argues that proposals like increased salaries, specifically market adjustments to make salaries more competitive, contribute to the overall wellbeing of the university.

“We have a lot of data that indicates that we get paid less and have lower compensation, then people at equivalent universities,” Miller said. “We believe that we can recruit strong nationally acknowledged faculty, particularly young faculty … which is, in many respects, the benchmark that you want … We lose what we think are a significant number of faculty who go to other universities for more money … it’s hard to convince somebody ‘yeah, I know that this other school that you’ve applied to … they’re offering this colossally higher salary, but you should come to Oakland anyway.’”

While the goal and expectation is to come to an agreement before the August 14 expiration date, that isn’t exactly a hard deadline for negotiations.

“I can tell you what has happened in the past … if everybody was kind of happy and copacetic, you could start saying we’ll extend the contract for a week. Or we’ll extend it for 10 days, or we’ll extend it to our next meeting, and so forth,” Miller said. “As long as both sides feel that we’re making progress, there shouldn’t be a problem in terms of extending it, if we only need, you know, until the 25th of August or something like that … by August the 31st, that can become semi-unpredictable terrain at that point, because Michigan labor law … It’s hard for me to predict. So we’ll just figure it out. And hopefully, we will focus on, we all have to live together, let’s live together happily.”

Anyone who wants more information on the contract negotiations can find the AAUP summary of bargaining sessions at http://oaklandaaup.org/BargainingDiary.asp and the administration’s summary at https://www.oakland.edu/provost/negotiations/.