Conquering the hills of Brooksie Way 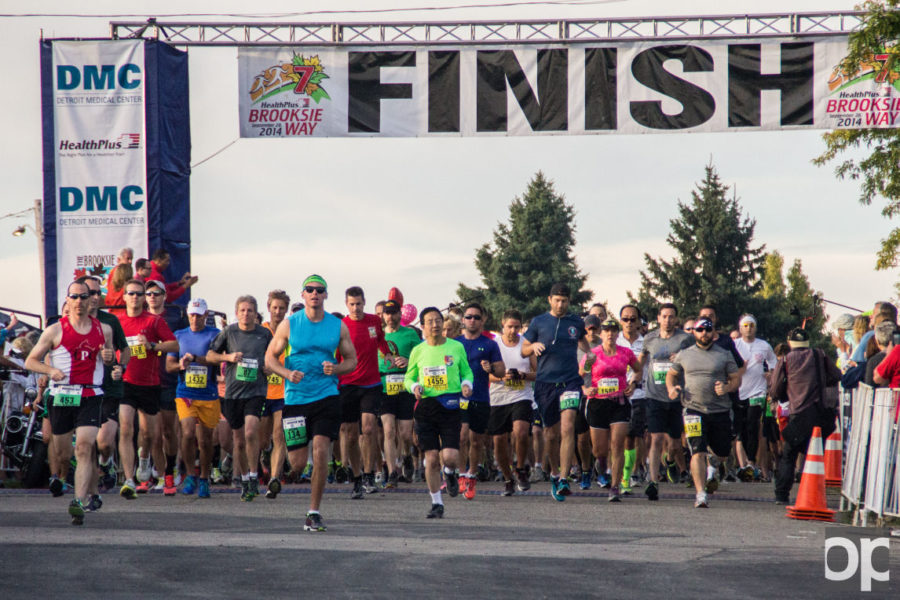 Thank goodness it’s over because I don’t want to think about those hills anymore.

Those hills help make The Brooksie Way one of the lovelier races in the country.

It’s certainly my favorite. The course winds through Rochester and Rochester Hills, where I grew up, the city that was just recently named the ninth best place to live in the country by money.com.

You see the best scenery that our area has to offer.

And it’s really quite underappreciated. About 6,000 people showed up at 8 a.m. on Sunday just for a run. I think that’s pretty damn impressive for a city with about 70,000 people living here.

This was my fourth year in a row running the half marathon. I’ve done it every year since I graduated from Rochester High School.

It’s the only half-marathon event I’ve ever run.

I’ve run the Great Lakes Relay and a few 10-mile races — the Crim and the Run thru Hell — but I don’t look ahead three months and circle the date for them like I do for the Brooksie.

This year was the seventh the race was held. The first was in 2008, named after L. Brooks Patterson’s son who died in a tragic snowmobile accident.

That year only about 2,800 runners completed the half marathon, and that was the only race that took place. The race has steadily grown since then, along with the events.

Organizers have added a 5K and a 10K to the race options and have obviously managed to double the amount of participants. The website identifies the race as a “quality of life event.” Originally, Patterson started the race to “encourage people to become more physically active.”

The course was slightly adjusted to avoid construction on Tienken road. This meant that runners (including me) were instead routed up Dutton road and its newly infamous hill/mountain/wall.

Congratulations to everyone that managed to maintain a stride up that thing. I couldn’t do it. I had to stop and catch my breath.

The hills aren’t my favorite part of the race. Rather, it’s the people.

I’m always impressed with the diversity of people, body types and ability levels.

Nobody is unwelcome; it’s just a bunch of people trying to better themselves. And every year, I’ve ended up running next to some of the coolest people that I know I share a bond with even if I’ll never know their names.

To the kid who paced me through the first six miles, I’m sorry I couldn’t stay with you. You had a great stride going, so thank you for that.

But the last few years I’ve ended up with the same guy by my side — Rochester runner Rich Power.

I didn’t know much about him before my first Brooksie but he’s gotten me through about 20 miles of hard racing through the years just because we wind up around the same pace.

And while I’m struggling to breathe correctly, Rich is always taking the time to thank the people along the route.

Rich said he has been running since middle school, had an injury-riddled collegiate career at the University of Michigan, but still continues to run almost 40 years after starting.

He said the desire to get exercise and fresh air is enough for him.

“Now I’m trying to stay ahead of the cardiologist, I don’t want to have to get to know him better,” Power said.

To me, Rich is the embodiment of running. He’s doing it for all the right reasons. And he’s beaten me every time.

I’m not disappointed. I’ve finished in the top 20 three of the times I’ve raced it.

Finishing well is nice but it’s a better feeling to see everyone around the city supporting the struggling runners so early on a Sunday morning. I wish I could thank every single one of them during the race, but gasping for air seemed more important at the time.

That’s why I plan to keep running these hills until I can’t.