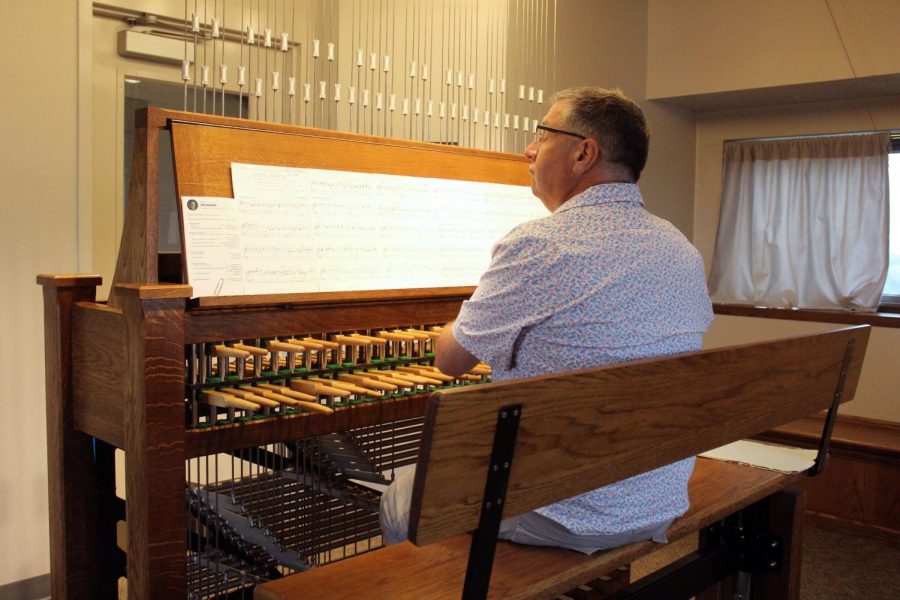 John Widmann sitting at the keys performing at the July 26 Elliott Tower concert.

The free event welcomes guests to bring lawn chairs and blankets and sit on the grounds surrounding the tower. Listeners enjoy about an hour-long set of songs ranging from Baroque pieces to jazz to popular transcriptions that vary every Friday, each chosen by the recognized carillonneur of that day’s performance.

Performers include(d): Helen Hofmeister from Grand Rapids, Michigan on July 9, Sue Bergren from Naperville, Illinois on July 16, John Widmann from the City of Frederick, Maryland on July 23, Keiran Cantilina from Cleveland, Ohio on July 30, Julie Ford from Detroit, Michigan on Aug. 6 and Dennis Curry from Bloomfield Hills, Michigan on Aug. 13.

Ford and Curry’s performances will include memoriam pieces in honor of Michigan State University carillonneur and member of the Guild of Carillonneurs in North America Ray McClellan who died on April 30.

Hofmeister, minister of music at Westminster Presbyterian Church, kicked off the series with Isaac Albéniz’s “Leyenda” and finished with a variety of arrangements including Russian folk songs and “Somewhere Over the Rainbow.”

The over 500 year-old carillon instrument started in the low countries of the Netherlands and Belgium. Clock towers were built in town halls where markets would gather or in the tallest steeple of churches. The bell-ringer would watch the phases of the sun and ring the bell to announce the time or the start of the market.

The towers also functioned as a warning system and civil defense device. If there was a fire, bells could be used to summon the fire brigade, or if there was an invasion, the bells could communicate to the townspeople to take cover.

“I guess civil pride got in play somewhere because the next town said, ‘I want to have a bigger tower and more bells’ so the towers kept getting taller and taller,” Curry said. “It became a form of entertainment as well. Carillonneurs would play for market days, special holidays, feast days and religious holidays.”

Along with Six Fridays at Six, there are more opportunities to hear carillon performances. Curry plays in Elliott Tower every Friday at noon for a half-hour.

Elliott Tower’s carillon, one of 14 in Michigan, has 49 bells. Donated by Nancy and Hugh Elliott in 2013, the carillon is the last from a 350 year-old bellfoundry in the Netherlands, Petit and Fritzen.

Oakland University also has a practice carillon located in O’Dowd Hall and interested students can take a class taught by Curry.