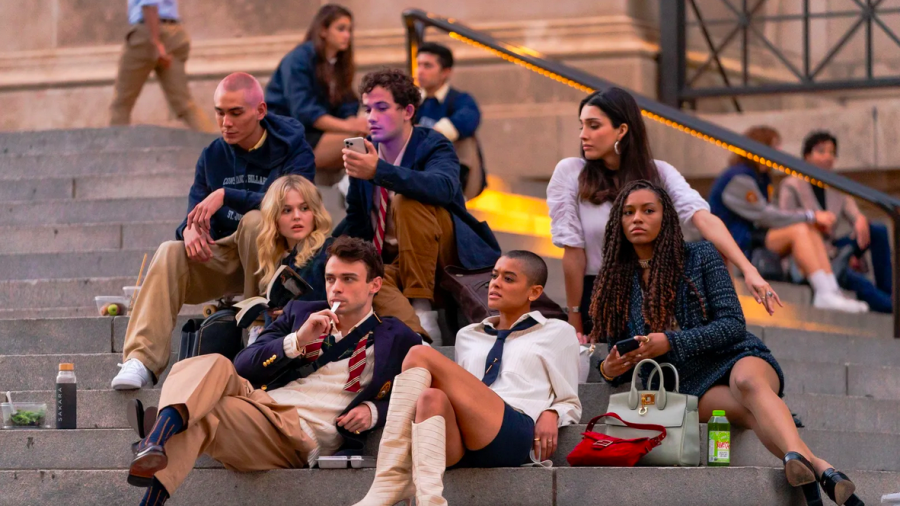 Hey, Upper East Siders… or should I say Golden Grizzlies.

Gossip Girl — not — here, but that doesn’t mean I can’t share my thoughts on the scandalous lives of Manhattan’s elite in the HBO Max reboot of the popular television show, “Gossip Girl,” which has quickly become the most-watched original series ever on the platform.

Bringing a new set of friends and their drama to the steps of The Met, the series focuses on the queen bee of Constance Billard —  Instagram influencer Julien — and her estranged half-sister Zoya, a middle-class newcomer to the prep school scene. Their complicated relationship brings out the rivalry, jealousy and power struggles undoubtedly familiar to the Upper East Side. Think Serena and Blair from the original, but with a far more confusing twist.

In the first two episodes, viewers are also introduced to Julien’s fashion-savvy posse and unofficial social media managers Monet and Luna, champagne socialist Obie, bickering couple Aki and Audrey and lothario Max. I hope my choice in descriptions leads you to deciphering who resembles whom from the original. The cast is more diverse from the perspectives of race and sexual identity in comparison to the original and following the tenets of just about every series on HBO, let’s just say things certainly get steamy…very steamy.

Unlike the original series, viewers also get an in-depth behind-the-scenes perspective from the teachers of Constance Billard and St. Jude’s. Tired of dealing with disrespectful students and being silenced by admonitory phone calls from powerful parents, they decide to take matters into their own hands. What they do becomes less and less about inspiring the next Kennedy or Obama and more and more about gaining the same leverage and toxic power that their students hold over them.

Gossip Girl is also revealed in the first episode, but her identity is a secret I’ll never tell — not in this review, anyway. Her newfound presence on Instagram forces everyone to be on their best — or worst — behavior. After all, you never know who’s watching, and no one likes their dirty laundry aired. These characters will do whatever it takes to stay on top.

The original series, which aired on CW and is based on the books by Cecily von Ziegesar, ended a little less than a decade ago but still has a loyal fan base, which begs the following question: Is the reboot better than the original? No, but it does satiate the desire for nostalgia that fans have been craving for so long.

Hearing Kristen Bell’s quintessential voice-overs and seeing students attired in their school uniforms that aren’t really school uniforms walk the hallowed halls of Constance Billard and St. Jude’s and partake in the most opulent of indulgences brought back many fond memories of television bliss, but maybe they should have stayed fond memories.

As someone who loved the intelligent and often catty dialogue full of references to classic films and books in the original series, I found the dialogue as well as acting in the reboot to be quite dull. Sure, there were some zingers here and there, but the old cast had a spark and scintillating wit that the new cast is simply lacking. Also, am I supposed to believe a multi-millionaire teenage girl born into privilege like Julien would pose as a social media influencer, seek sponsorship deals and use the phrase #GirlsJustWannaHaveSun? I don’t think so. The reboot further solidified that there is no queen bee like Queen B.

What’s unique about the reboot is you can actually follow the accounts of Gossip Girl and the fictional characters themselves on Instagram. It is a clever marketing tactic that definitely enhances the viewing experience. I also give the fashion selection and series soundtrack a solid 10/10 and felt like they were the same quality, if not better than what was showcased in the original series.

Going forward, only one episode will be released a week which allows viewers to build up anticipation and savor the moment, but it is kind of ironic that one can’t binge a show about rich kids who can get anything they want when they want it.

With all of this being said, I obviously favor the original over the reboot. However, future episodes might change my mind. But for now…

To the O.G. Gossip Girl: Three words. Eight letters. I said it then, and I’ll say it now. I’m yours.