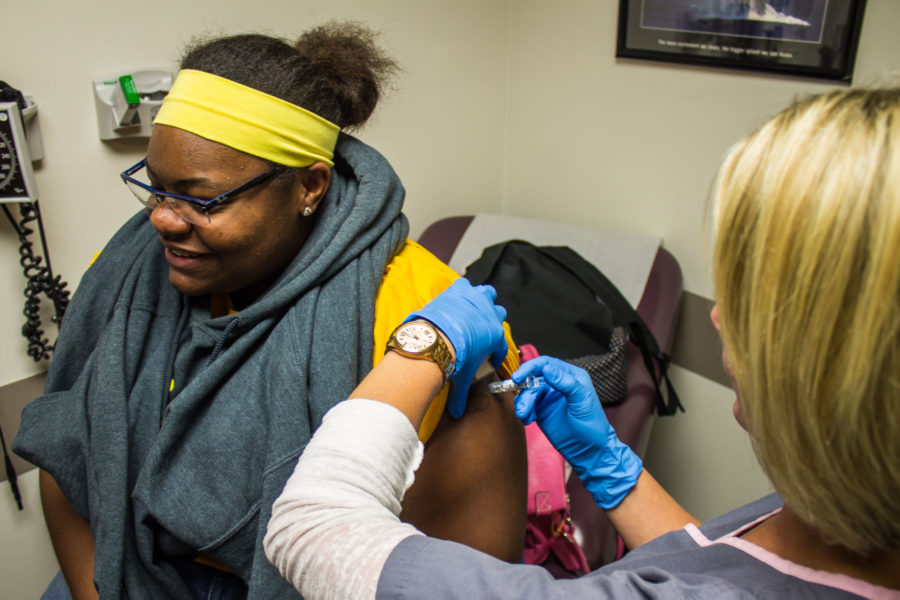 OU vaccinated over 12,000 people in the Flu Vaccination Challenge.

Stop the Flu at OU.

Fall marks the beginning of the flu season. With a campus full of people to share germs with, you should go out of your way to protect yourself. By getting an annual flu shot, you can make yourself less vulnerable to the virus and less likely to get sick from it.

By appointment, the Graham Health Center on campus can provide students with flu shots any day of the week. If you have a busy schedule, and it’s hard to set up an appointment, they also offer walk-ins on Wednesdays. Most insurance plans cover the shot, but if for any reason yours doesn’t, the shots are fairly inexpensive, costing around $20.

“Everybody over six months of age needs a flu shot annually. That’s why we are encouraging all of our students to get one this year,” said Nancy Jansen, Director of GHC.

This year, as a way to bring awareness to the severity of the flu and importance to getting the shot, the Michigan Department of Community Heath of has set up a statewide campus flu vaccination battle.

The battle is a friendly competition between different universities throughout the state. Oakland will be competing with the likes of Michigan State, University of Michigan, Grand Valley, Wayne State, Aquinas and others.

By participating, universities can receive access to different education resources and programs for students, win awards, and get bragging rights through a press release and social media channels.

As part of this battle, the Graham Health Center will be hosting a flu and health-themed event in October to raise awareness of the flu. They will be giving out some shots for students and will have different informational packets and giveaways.

“Basically, we are trying to get more young people vaccinated. Young people and college students like to think that they are invincible and can never get sick so they don’t want the vaccine,” said Dr. Renda Dawud, a physician at GHC.

GHC is working hard to advertise their events and make sure that Oakland comes out on top as a winner. By winning, OU students can show the rest of the state that their health is important to them.

“I want to be able to show the state and our competitors that we are very health oriented on campus. I want to show everyone that even though we are small, GHC can make a difference,” Jansen said.