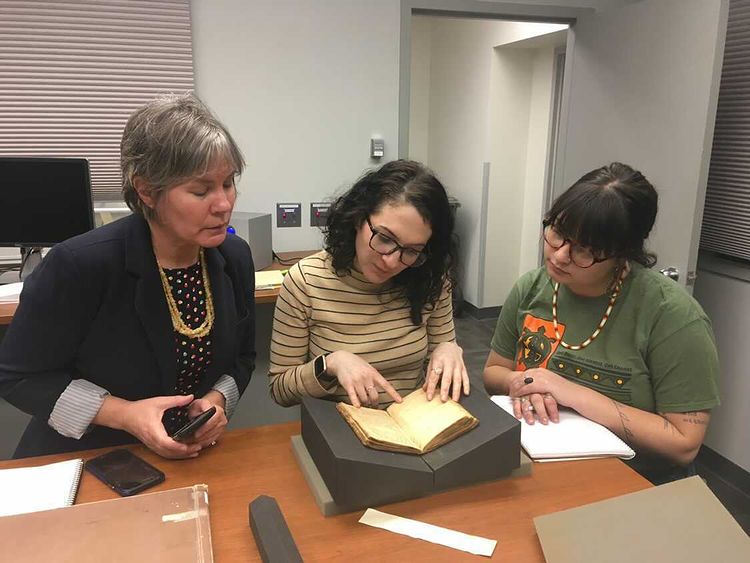 Oakland University resides on the ancestral, traditional, and contemporary lands of the Anishinaabe, known as the Three Fires Confederacy, comprised of the Ojibwe, Odawa, and Potawatomi. The land was ceded in the 1807 Treaty of Detroit and makes up southeast Michigan.

In recognizing the history and respecting the sovereignty of Michigan’s Indian Nations, Oakland University honors the heritage of Indigenous communities and their significant role in shaping the course of this region. Further, we recognize the wrongs done to those forcibly removed from their Homelands and commit to fostering an environment of inclusion that is responsive to the needs of First Peoples through our words, policies, and actions.

The preservation and perpetuation of customs and traditions of Indigenous nations are essential to our shared cultural heritage. A deep understanding of Native peoples’ past and present informs the teaching, research, and community engagement of the university in its ongoing effort to elevate the dignity of all people and serve as shared stewards of the land.

The land acknowledgement passed through the OU Senate on Feb. 18, and was presented to the Board of Trustees on Apr. 8. By officially enacting the acknowledgement on May 5, OU joins a number of public institutions across the country in this step toward the inclusion of Indigenous communities.

While the process of getting the statement enacted progressed through the OU administration relatively quickly during the winter semester, years of work went on behind the scenes.

A grassroots initiative, this acknowledgement moved from students to faculty to the administration. The inception of the land acknowledgement was actually work that OU graduate Tara Maudrie (tribal affiliation Sault Sainte Marie tribe of Chippewa Indians) turned in for a course with Honors College Dean Graeme Harper.

“I spoke with Tara at an American Indian Health and Family Services event, at which she told me about writing it for [Harper’s] class,” Associate Professor of English Andrea Knutson said. “She then sent it to me — I posted it on Facebook, and that’s when Professor Rajaee responded telling me Tara was a student of hers and that we should talk about getting it formally adopted.”

This moment that connected Maudrie, Knutson and Assistant Professor of Public Health Mozhgon Rajaee occurred in August of 2019. Maudrie had graduated at that point, so Knutson and Rajaee took the next steps of bringing Indigenous voices into the process of progressing the land acknowledgement.

“I’m not Indigenous, and Andrea is not. So [there] was a keen awareness that this shouldn’t be an acknowledgement that’s just driven by non-Indigenous peoples,” Rajaee said. “Megan and Ashleigh both contributed, but [there was still this question of] how do we create this with a larger community having input? We took a draft and we shared it with [Indigenous] folks and then got feedback and made modifications.”

With that bigger picture in mind, this core four of Knutson, Peiser, Rajaee and Dubie continued the delicate work of drafting the statement. With such emphasis and weight behind each individual word, Knutson referred to the multi-year writing process as “the most intense work with language” that she’d ever done.

“It had to go slowly. It had to emerge out of conversations with native communities,” Knutson said. “We had to get language from them … we had to hear what they wanted from land acknowledgements. We were absolutely committed to making sure that the land acknowledgement didn’t devolve into just rhetoric.”

To ensure they achieved their goals, the group made the language tangible by acknowledging specific Indigenous communities and accurately reflecting history.

“It’s very rooted in history, tribal identity, tribal names [and] location, which is what we really wanted,” Dubie said. “We didn’t want a watered-down generic statement … that’s more harmful than not having one at all.”

Peiser expanded on this point and the group’s mentality while crafting the language.

“We worked to ensure that the Land Acknowledgement spoke up for the land, and for the living work and experiences of Indigenous peoples of Waawiantanong (Detroit),” Peiser said. “Together we crafted the Land Acknowledgement to accurately reflect the violences perpetuated against Native and Indigenous Peoples of what is currently called Michigan, and intend it to stand as both a clear recognition of those atrocities, and a promise of better and different relationships with local tribes and the land by [OU].”

The next step in the drafting process was collaborating with OU‘s administration to adjust and advance the land acknowledgement.

“The Land Acknowledgement Committee worked with Deans Joe Shively and Kevin Corcoran in the College of Arts and Sciences, Faculty Senate, and the DEI Office,” Peiser said. “Most of this work was actually teaching — educating those in leadership positions who Native Peoples of Michigan are.”

Administrative adjustments made to the land acknowledge document were mainly to make the statement more specific to OU. Interactions between the two sides during negotiations were collaborative and respectful.

“There was no draft that was signed off on without it going back to our committee,” Knutson said. “At every stage, whatever happened to it, whether it was a minor tweak, or a sort of bigger reorganization … everybody understood that no draft moved forward without the okay of our committee.”

When that Campus Communications email announcement made the OU Land Acknowledgement Statement official, there was definitely a sense of pride in what had been accomplished. Outside of the usual  satisfaction of a job well done, Dubie had deeper reflections about what the statement means for her as an Indigenous student.

“For me it’s important because OU has been where I’ve been studying, which obviously has a close place to my heart … and yet it, up to this point, had not really acknowledged Indigenous people,” Dubie said. “We want our schools to be a safe haven for us … it didn’t feel safe for me as an Indigenous person, because [this] piece was missing.”

As big of a step as the land acknowledgement is, it’s a foundational step that the committee wants to see built upon.

“Oakland needs to step up with money and real resources,” Peiser said. “We need scholarships for Native students … we need to hire more Native faculty … We need a cross-departmental program for Native students and settler students in Native arts, ecology and more. And to fully fund them — not ask Native faculty to beg for support … Allies need to step up and take on that work. I hope our administration will.”

For OU, the first steps in delivering a more inclusive campus for Indigenous students is going to be following up on the goals outlined in the Campus Communications release. Tangible commitments like displaying the statement on OU websites, integrating it into courses and delivering the land acknowledgement statement at events were all outlined in the email. Right now the administration is working on completing and expanding those goals.

“I’m working with Glenn McIntosh, our vice president for Student Affairs, and also our chief diversity officer, to really see how we can engage folks within the community,” Executive Vice President for Academic Affairs and Provost Britt Rios-Ellis said. “[We’re considering] some type of an ongoing event that would honor Native Americans … Native American History Month or some other activity. I also think that we are exploring, putting a [permanent plaque of the acknowledgement] in a very public place … so that it helps the community understand where we come from.”

For anyone interested in advocating for Indigenous people, the main advice from the committee is to find people and collaborate.

“Start working together,” Rajaee said. “This is how the land acknowledgement started, we started talking together. Individually, I’d been thinking about this for a couple years before this before we started working together … so there are folks who care about similar issues. And once you start getting together, you can start making things happen.”