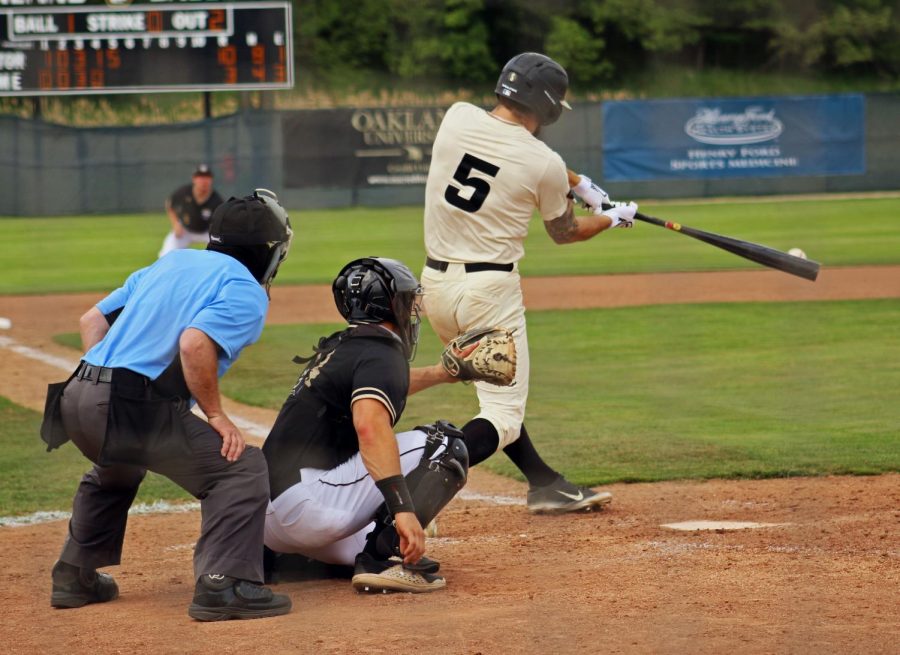 Cam Post puts bat on ball against the Purdue-Fort Wayne Mastodons. OU took the game and finished the season with a win.

The Oakland baseball team finished off their season with a series victory over the Purdue-Fort Wayne Mastodons.

Friday’s first game was a bit of a clunker. The Grizzlies fell behind 4-0 early, but were able to rally back with three runs in the third inning. That wouldn’t be enough though, as the Mastodons kept pouring it on — led by a five-run fifth inning. PFW took game one, 12-4. Infielder Michael Stygles had an RBI single in the loss.

Head Coach Jordon Banfield said he didn’t like anything about game one.

Game two was a slugfest right from the get-go. PFW put up three runs in the second inning, then Oakland would tie it up with a run in the third and two in the fourth. The Mastodons responded with two in the fifth, but the Grizzlies exploded with a whopping eight runs in the fifth inning to make it an 11-5 game.

After OU put up four more runs in the sixth, the Mastodons made a comeback attempt. They scored seven runs in the seventh inning to make it a 15-13 ballgame. That’s as close as it would get though, as the Grizzlies tacked on a couple more and took game two 17-13, splitting Friday’s doubleheader. Outfielder Cam Post went 3-for-5 with a double and home run in the win.

Banfield said the team had to keep scoring late in order to win games.

“We’re certainly short-handed on the mound right now,” Banfield said. “We’ve had to put runs on the board. Our offense has really gotten to a good place in the second half of the year, and we feel like our offense can hang with anybody in the league, outside of Wright State who’s been [beating] everyone recently. I was really excited about that. It was a good way to salvage a split on Friday, for sure.”

Saturday was senior day at the Oakland Baseball Field, and fittingly, it was the seniors that shined the brightest. Post kicked off game three with a two-run homer in the first inning. After PFW scored five unanswered runs, the Grizzlies stormed back in the sixth inning with four of their own, led by a three-run shot by Stygles, another senior. Oakland took game with a score of 6-5.

“We felt like if we could keep them at five, we would be able to come back and take the lead,” Banfield said. “Their game three starter, [Jacob Myer], is really good in my opinion. We were able to get a couple runners on, and the wind was blowing out so we knew it was going to be an offensive day. So we just had to hit the ball in the air and Stygles was able to do that to put us down one. Then we really manufactured the last couple runs. Worked a couple walks, then we had some nice two-strike hitting and baserunning from Brooks Asher, a senior, and Drew Collins, a freshman, made a really heads-up play on the bags to come around and give us the lead and were able to shut it down. So that was certainly one of the cleaner games both ways in the weekend, probably the cleanest game.”

Game four was another slugfest. Scoring didn’t start until the third, when the Grizzlies plated two runs. Rutan started on the mound for OU, pitching three scoreless frames before allowing two runs in the fourth.

The teams went back and forth, leading to a 9-9 tie after six innings — but the Grizzlies broke the game open in the seventh with five runs, highlighted by a grand slam by Post, his third home run of the series. Outfielder Seth Tucker, another senior, added a three-run shot of his own in the eighth to seal the victory. Oakland took the game 17-10, sweeping Saturday’s senior day doubleheader and taking the series.

Banfield talked about the impact of his seniors after the game.

“As guys who have been here for three or four years, it’d been easy for them to just say ‘we want to do things the way it’s been, our way.’ That hasn’t been the case at all,” Banfield said. “I definitely thank them for that. They know how much I appreciate it and I’ve really communicated that.”

Oakland finishes the season with a record of 18-29, 12-24 in Horizon League play. Banfield described his first year at the helm of the Oakland baseball program as “not what he expected with everything else going on.”

“We couldn’t even have team meetings or recruiting visits or meals or anything like that for most of the year, really all year,” Banfield said. “The thing I liked about the last couple weeks, besides winning three of the last four series in the league — we had a sense of normalcy. Now with less rules outside there’s all kinds of stuff we get to do more, more team-type stuff. We had an actual team meal this week for the first time this year, all of us together, so that’s definitely something that I look forward to really getting back to normal life.”

Banfield talked a little bit about the future of the program, noting several seniors will be taking advantage of their extra year of eligibility.

“I definitely see the progress on the field,” Banfield said. “Not as much as I want but when you look at the production, it’s certainly there. But more than anything I think that we have the direction headed the right way with the culture and the guys we continue to bring in and the guys that we bring back next year. We won’t be losing a lot of production. Guys like Cam Post, [Michael] Stygles, those guys will all be back. We’re excited about what we bring back. The staff and I are ready to get to work. We’re finally allowed to recruit on June 7 in person, which will be awesome. We like the guys we have coming in and are looking to add to that.”