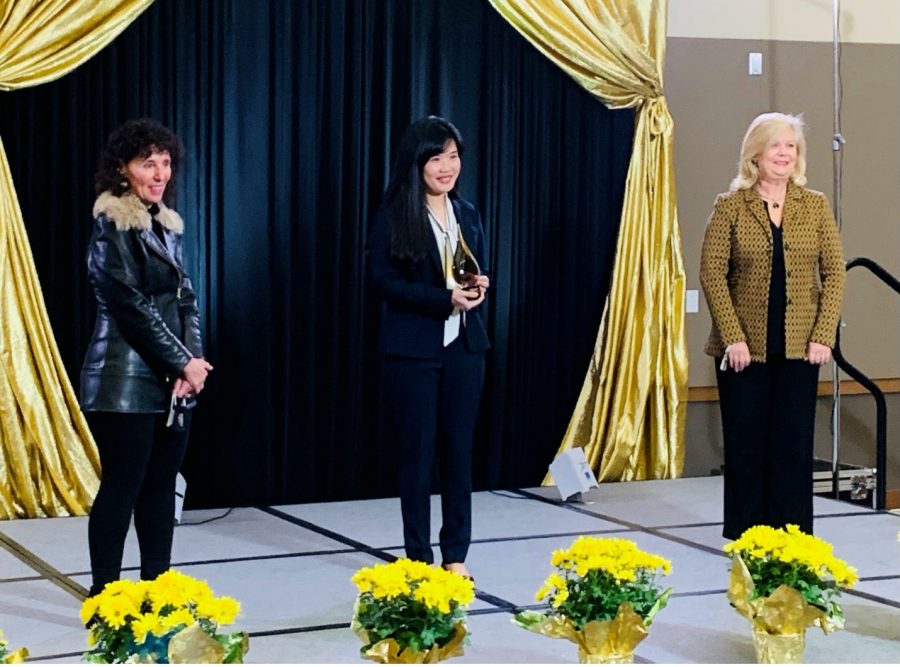 Hailing from political origins in Taiwan, assistant professor Chiaoning Su is a lifelong storyteller and master of meaningful connections. These attributes have culminated in five successful years at Oakland University, and earned her the Excellence in Teaching award last month.

After receiving her undergraduate degree in Taiwan, a familiarity with and appreciation for American pop culture led Su to pursue her master’s degree in the U.S. at Emerson College. She then returned home for several years of professional PR work before moving to the U.S. permanently in 2007, where she earned her doctorate in Media and Communication from Temple University.

Su recalls encountering various difficulties during her first semester as a PhD student — particularly due to language barriers.

“To be honest, I really struggled in the beginning,” she said. “It took a few years for me to really build up that necessary vocabulary and confidence to believe I could finish the degree [and be] a teacher in an American classroom.”

The establishment of a support system made up of friends that would become lifelong helped Su find the confidence to become the teacher she had longed to be. When an opportunity opened up at OU in 2016, she was eager to fill it, intrigued by the school’s desire to develop a PR program.

“I think it’s important because PR really is a growing industry,” Su said. “But most importantly, I want students to know that PR is not just about manipulation or a rhetorical spin. I want them to know that if done correctly, PR is a form of strategic communication that’s very often guided by principles and integrity [and] plays a key role in advocacy and social change.”

This ambition led Su to play a significant role in the debut of a robust Public Relations and Strategic Communications major launched in 2018 — a career highlight for the professor. Along with recruiting and mentoring students since then, she has even further advanced the program by successfully pushing for the establishment of a Public Relations Student Society of America (PRSSA) chapter at the school.

An additional moment Su reflects proudly on from her time at OU was her contribution to the 2017 and 2018 Taiwan Week celebrations — where OU students were able to immerse themselves within Taiwanese culture. Through organizing events such as movie viewings and a performance from the National Chinese Orchestra, Su and her colleagues introduced the beauty of Taiwanese art to OU.

“To see my two worlds collide in this setting that I truly care about — I think that was one of the standout moments for myself,” she said.

Su’s recent honor will likely come as no surprise to anyone who has sat in her classroom before and experienced her natural ability to form meaningful, lasting connections firsthand. For Su, forging these connections is one of the most essential parts of each semester.

“This is the most rewarding part of my job — to have that connection with students, to understand their personal journey, their ambition, their vision, and then to just be with them throughout that process,” she said. “I really want them to leave my classroom with a better sense of who they are and what they want to become.”

As the 2021 recipient of OU’s Excellence in Teaching award, Su has come a long way from the timid student she once was. She prides herself on the hard work she has put forth and the adversity she has overcome.

“Of course [this award is] a recognition of the hard work in the past few years, [but] it is also a confirmation that cultural differences are an asset rather than a limitation,” she said, noting that receiving this award feels exceedingly special to her this year amid rising Anti-Asian sentiments. “I think to receive this award this year is particularly meaningful to me and to OU as well. It’s a testament to the kind of environment we are.”