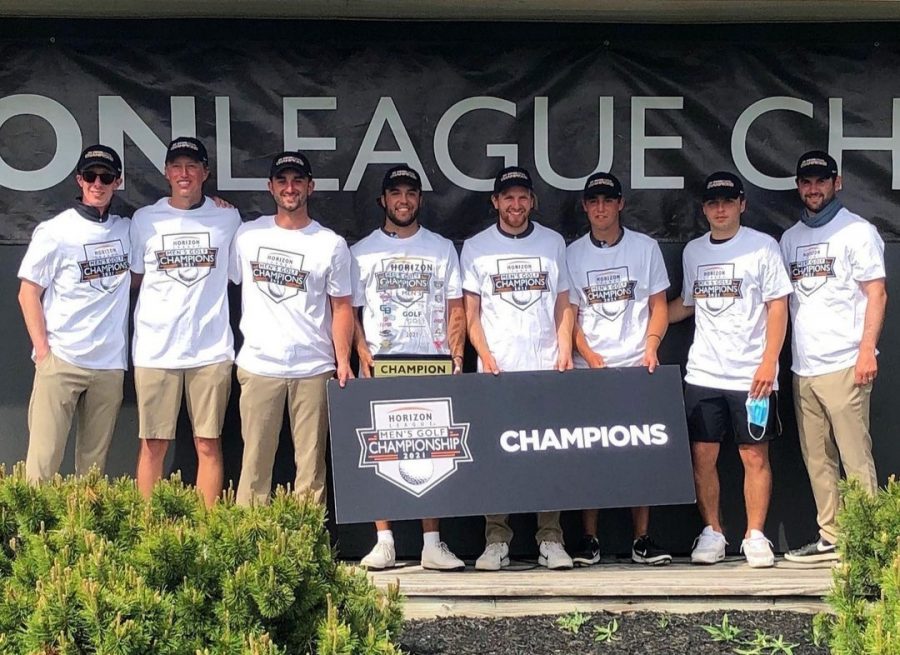 Thomas Giroux was the medalist with a score of 214 (-2). He credited his putting skills for his strong play.

“It feels really good being the medalist for the championship, [especially since it was] my first collegiate win,” Giroux said. “I’ve played well all year and it was nice to finally get a win. I was consistent all week with the putter and felt really good on the greens. The team was able to have some positive vibes on the course and kept our momentum going throughout the entire tournament, which was a key to our success.”

“We had not played in a tournament for over a month,” Pumford said. “We had done a lot of qualifying and a lot of playing leading up to it, but nothing in competition. So, to be honest I expected the guys to be a little bit rusty, but they came out firing and ready to go.”

The golf team had come in second place in the Horizon League tournament in each of the previous four years. Pumford said it was nice to “finally get the monkey off our backs.”

“Sometimes as a coach when you keep finishing runner up [you start] questioning if what you’re doing is working correctly,” Pumford said. “[But] kudos to the guys, we talked about culture a lot with our team and sticking with the process and we were very process oriented coming in and the results take care of themselves.”

Pumford said the difference this year compared to the previous four was that they weren’t the top-ranked team, which took some of the pressure off them.

“We were definitely the underdog, and we took that underdog approach,” Pumford said. “So I think that [helped clear our minds] a little bit. [The thought process became] ‘Hey, we got nothing to lose. Let’s just go out and play good golf,’ and they did it.”

The team’s No. 3 ranked player, Cameron Lippoldt, had to miss the tournament due to COVID-19 contact tracing. Pumford said he was more upset for him than anything.

“He’s obviously one of our top players, but he’s an awesome kid that does all the right things all the time,” Pumford said. “So I was really heartbroken for him that he put in all the time and effort and [was] adhering to all our protocols and all of that and unfortunately it was a close contact with somebody. But then after that it’s, ‘alright next man up.’ That’s one of the things we talked about all year was situations like that — you just never know. [You] never know who’s gonna be a close contact. The message throughout the whole year [was] ‘be ready.’ Be ready and you never know when your number is gonna be called.”

Pumford would like to play in either the Florida or New Mexico regions because of his familiarity with the golf courses.

“They’re big, wide open golf courses which suit our game,” Pumford said. “We’re a team that hits [the ball] pretty long and when you have speed on the golf ball, sometimes it can go right or left pretty long. So anytime we can get a golf course that is more wide open and then put some emphasis on tee shots and putting, we’re going to do better. But honestly, we’ll take wherever we get and we’ll compete our butts off.”

The 2021 NCAA Division I Women’s and Men’s Golf Championships selection show will take place Wednesday, May 5 at 2 p.m. on the Golf Channel.