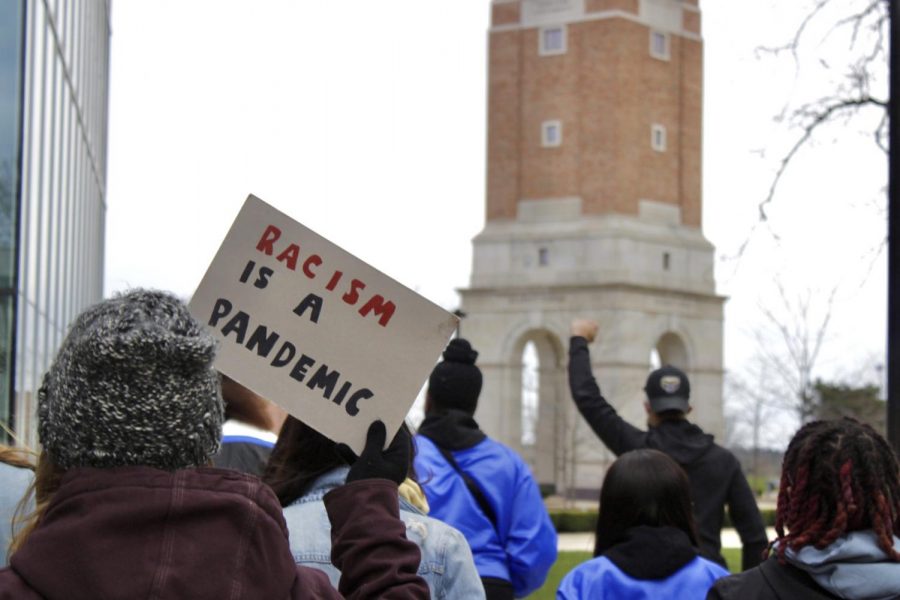 Sean King, dressed in a winter jacket and bracing against the wind, climbed on his car and rose his fist in the air as he spoke to students gathered to honor Ma’Khia Bryant in the parking lot of the Human Health Building. He prepped the small crowd of 15 students for the march they were about to embark on, and chants of “say her name” and “Black women matter” rang through the otherwise quiet campus.

Ma’Khia Bryant was a young Black girl who was shot and killed by the Columbus Police Department on Tuesday, April 20. The 16-year-old was in an argument with another girl at her foster house when things escalated. For defense, Byrant had a knife, which was in her right hand when the police arrived.

Officer Nicholas Reardon fired four shots at Bryant almost immediately upon arriving at the scene. He has been suspended from the field pending investigation into the shooting.

Students marched through campus for the teen, as well as saying Breonna Taylor’s name — a reminder that she has not gotten justice either.

“I came out [to march] today because as a Black woman, it’s disheartening to see someone that could be my sister shot and killed in the street,” said freshman Allison Thomas.

This shooting came just one day after the delivery of a guilty verdict for Derek Chauvin, the police officer who murdered George Floyd last May.

“I know it’s tiring to constantly see Black death, and to come out in the cold during finals week,” King, the president for the Association of Black Students, said. “You don’t feel like doing this sometimes — I’ve been there myself, but at the same time … Black women, Black girls, y’all are erased.”

The Association of Black Students organized the march and gathering, which ended at Elliott Tower. Here, King gave another speech about the impact of the event and offered an opportunity for others to speak as well.

“This is something that calls near and dear to my heart, as somebody who wants to have a Black family, and I have little sisters,” he said. “I want to make sure that I’m doing everything I can to make sure that I’m making a world for them to live in, and not a world where a grown ass man would want to take the life of a young girl.”

James Nickel, a student from Columbus, Ohio, was glad to have the opportunity to come out for Bryant.

“It’s just not safe,” Nickel said. “The CPD have been terrorizing all Black and brown communities for the past year, essentially — I mean of course, forever, but the past year for really bad. The CPD are cowards, they don’t know what they’re doing. They’re scared of everyone, and they’re shooting before asking.”

At the march, there were calls for justice for Bryant and urges to check in on loved ones. King and Omar Brown-El, the director of the Center for Multicultural Initiatives, reminded everyone to put in the work and not to give up.