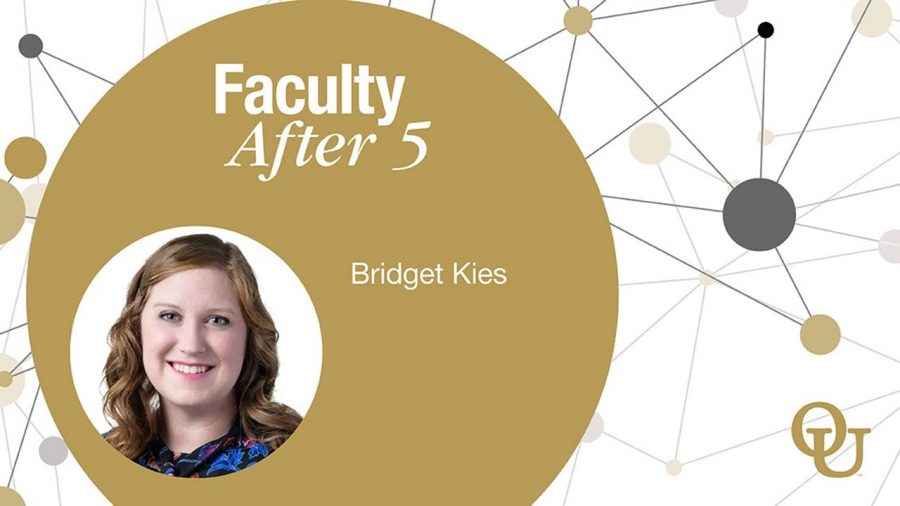 Professor Bridget Kies taking part in the Faculty After 5 lecture series. Kies has been a professor at OU since 2019.

Everyone loves to watch movies, but film majors hope to eventually make movies. Bridget Kies, Oakland University assistant professor of film studies and production, has developed that passion and strives to inspire the same passion in her students.

Before Kies fell in love with the idea of teaching, she took an uncommon path. After she graduated from college, Kies got a job in France teaching English to high school students from 2002-2003. Kies was originally a French major in college and had experience doing a semester studying abroad in Paris.

“I wasn’t really sure what I wanted to do with myself after I got my Bachelor’s degree,” Kies said. “I knew I wanted to do something with my French degree, this opportunity opened up and I thought it would be really cool – and I got to live in France for a while.”

She realized how much she liked teaching, but decided the high school level wasn’t for her because the level of maturity just wasn’t there.

When she got into teaching at the collegiate level, she was only teaching first year students. Kies found satisfaction in seeing the growth students had from the beginning of the year to the end.

Kies received her Ph.D. from the University of Wisconsin and lived in Milwaukee for seven years. She then taught at the College of Wooster in Ohio for one year, which is very small compared to OU. After teaching there for a year, Kies came to OU in the fall of 2019 and was shocked at how different the environment was at OU.

“It was actually the end of the school year when I got the call that I was getting hired at Oakland,” Kies said. “So it was really coincidental both for OU and me that I could move right in and they wouldn’t lose a faculty member for the next year. It wasn’t necessarily a choice, more like luck of the universe.”

Kies teaches classes such as Film and Formal Analysis, 1985-2021 21st Century Film History and an LGBTQIA+ cinema course. While film wasn’t the original plan for Kies, it ended up being something she became really passionate about teaching.

“The thing about film and media is that first of all it’s a fun subject to study, it’s like pop culture and it’s something we all encounter in our daily lives,” Kies said. “There’s an automatic appeal because students are already interested… so the challenge isn’t making students interested in the topic, the challenge is to make them think differently about it.”

Her class content is focused on what can be seen in TV and movies. Her students learn that instead of just watching, they can think about what is actually being shown on screen and how that affects the film. Kies’ favorite part about teaching film is seeing her students pick up on the critical thinking of watching films.