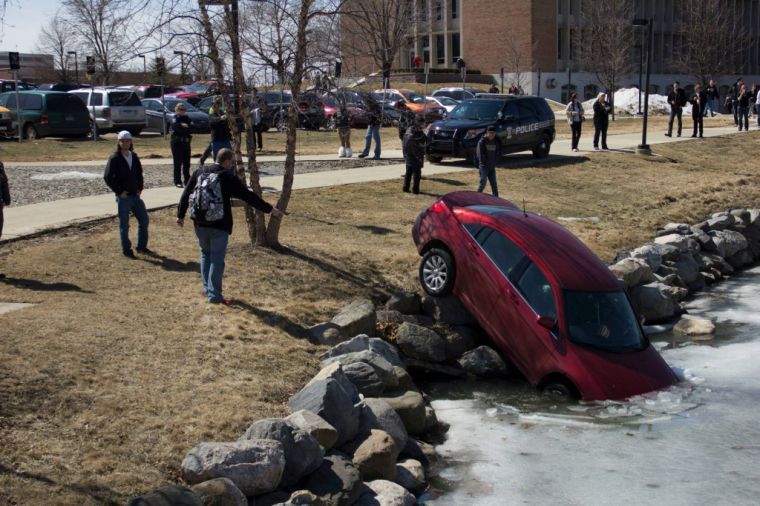 Shuana Hazime found her car in Bear Lake after class on Wednesday April, 2. Her vehicle is only the most recent that has taken the plunge though.

The rumors are true. There have been several fateful voyages into Bear Lake since its creation in 1968, and these are their stories.

The origins of ‘Beer’ Lake

The murky waters were originally coined Beer Lake, until a ‘e’ letter was eventually swapped to represent Oakland University’s new division one mascot: the Grizz.

While Bear Lake has become a staple of OU, it has remained largely unchanged throughout the decades, aside from its various car contents. Initially, students in ‘68 were expecting a “public bathing beach,” according to The Oakland Post, but that luxury was never given.

Dr. William Forbes explained Bear Lake immediately defaulting to a solely visual lake was “the result of lack of foresight” in 1968. There was too much pollution in that area — stemming from drainage patterns — for Bear Lake to ever be swimmable.

Forbes recommended fencing off the lake to avoid accidents and rogue swimmers, but fencing was never installed.

The Oakland Post first acknowledged a precarious pattern of runaway vehicles in 1985, after four vehicles had taken the plunge.

“If you dare to park your car in the OC parking lot and happen to leave it out of gear, expect your car to be taking swimming lessons on the bottom of Beer Lake,” Joellen LaBaere said in the Oakland Post.

The owner of a 1982 silver Oldsmobile watched his car initially inch away and then begin to pick up speed. His car traveled roughly 50 feet — knocking over a live light pole, chipping over a curb and cracking through the ice on Bear Lake.

“[All the cars have gone] in almost the same spot,” Inspector Mel Gilroy said. “It’s unbelievable.”

The following day the county diving team towed the Oldsmobile out of Bear Lake and found another automotive victim in the process.

A mud-coated station wagon was rescued from its watery demise on Sept. 25, 2002 — almost a decade after its plunge, according to then OU Lt. Richard Tomczak.

The hood of the car was spotted by a groundskeeper because the water was three feet lower to account for lake construction. After contacting the Oakland University Police Department, it was retrieved.

It was never determined how this car found its “watery resting place,” though. Police found saturated clothing, shoes, a blowdryer, curling iron, suitcase and purse in the car, which may hint to the identity of the owner, but nothing was salvageable enough to specifically tell.

Then-Senior Shuana Hazime found her red Chrysler Sebring peering into Bear Lake when she was leaving class on Wednesday April, 2.

“I come out finding out I could graduate in April and find my car in a lake,” Hazime said. “There’s nothing I can do.”

According to OU Police Chief Mark Gordon, a vehicle was towing a van, and the van became unhitched and bumped into Hazime’s car, pushing it into Bear Lake.

The car was pulled out after four hours, and Hazime filed a police report.

Despite Bear Lake never being open to swim, many cars have taken the dive. Even so, no one has even been reported hurt from any incidents.

These are the recorded rescues. But it’s impossible to know — for sure — what still may rest below the murky surface of Bear Lake, and because of that uncertainty, the legends of Bear Lake can live on.