How Oakland sports will look beyond COVID-19 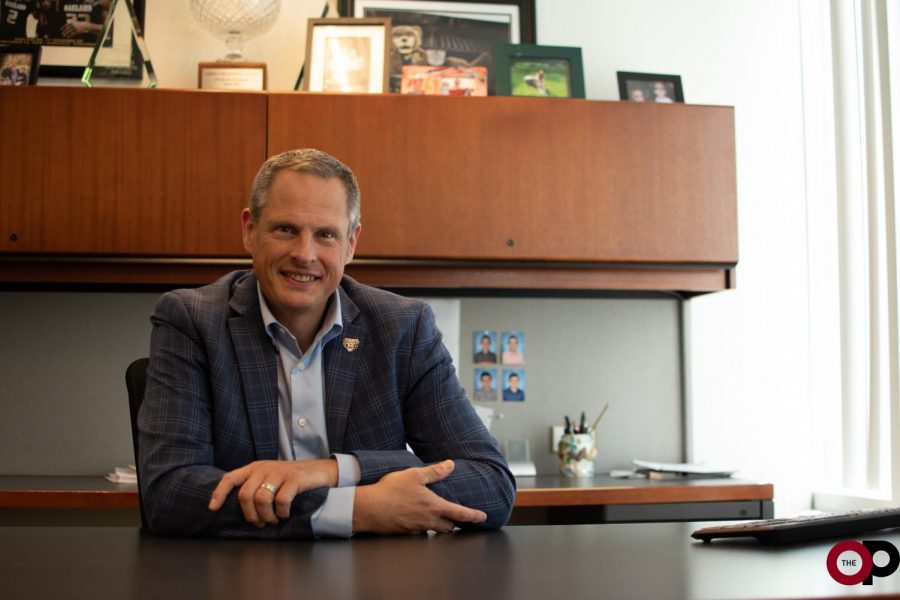 After a year defined by COVID-19 tests, empty seats and sacrifices from student-athletes, there is a light at the end of the tunnel as vaccines become available and implemented.

Those student-athlete sacrifices are what made the COVID-19 era of college sports enjoyable for Athletic Director Steve Waterfield.

“There was a definite energy within the department, even though we weren’t really able to be around,” Waterfield said. “They were looking forward to it and they made a lot of sacrifices in the sense of testing, walking in on a given day and there could be people spaced six feet apart, 50/60 deep to get tested per the NCAA.”

With COVID-19 dropping a bomb on athletics budgets across the country, Oakland was one of many facing the challenge of looking forward while surviving with less incoming revenue.

As a result, many athletics initiatives were derailed while the country figured out one of the 10 deadliest pandemics in human history.

“We fully expect to have fans now,” Waterfield said. “Will there be restrictions on numbers… I don’t know, but hopefully [we] build that out [and] continue to bolster attendance. It’s already great, but [we’re focused on] how can we make it better and give them a better experience.”

More historic landmarks appeared while the pandemic was at its peak. College athletes around the country were in the streets, marching for racial justice and demanding more from their country, the NCAA and their universities.

For Waterfield, the summer of 2020 marked a first step of many toward promoting a more diverse, equitable and inclusive environment. The department had a four part series with Dr. Tommy Shavers, who spoke to student-athletes and faculty about the current state of identity in the U.S.

“We talked through getting to know yourself, understanding we’re all products of our experiences,” Waterfield said. “And, how do we be part of the solution and how to make progress, because we need to make much more progress as a society.”

“That’s one of the biggest challenges we’ve had, is not only can you not really meet with people face-to-face, but it’s tough to ask for gifts when so much is in flux internationally, nationally, with the economy and people’s businesses,” Waterfield said.

He hopes the Lepley Center can be similar to the Oakland Center in providing a sense of community and a central location for student athletes to spend time together.

“They knocked it out of the park with the Oakland Center, it really becomes the centerpoint of the university,” Waterfield said. “I think having that for our athletes, so when they’re between practice and class they can hang out and talk … that’s just driving that Oakland community.”

This season for Oakland sports was a prosperous one. The men’s and women’s basketball teams hosted league tournament games, the men’s soccer team was a top 25 team in the nation, men’s and women’s swim won the Horizon again and multiple Golden Grizzlies across the league earned All-League honors.

“I’ve been so proud of what the student-athletes and coaches have done,” Waterfield said. “It’s been a success in a lot of ways, I’m just really proud of everyone that’s part of getting student-athletes to that ability to practice and compete.”

Esports also had a successful first season, and is adding Overwatch to their current roster of esports: Smash Bros., League of Legends and Rocket League.

Waterfield always thought esports had a place at OU, but after seeing the team in action for a year, he was impressed with how they hit the ground running.

“I think six of our esports student athletes are in the top half percent in their sport in North America, and that includes professionals,” he said.

Whether it’s esports, track and field, tennis, soccer or basketball, Waterfield is in the business of “celebrating excellence,” and moving forward he hopes to do that as much as possible.