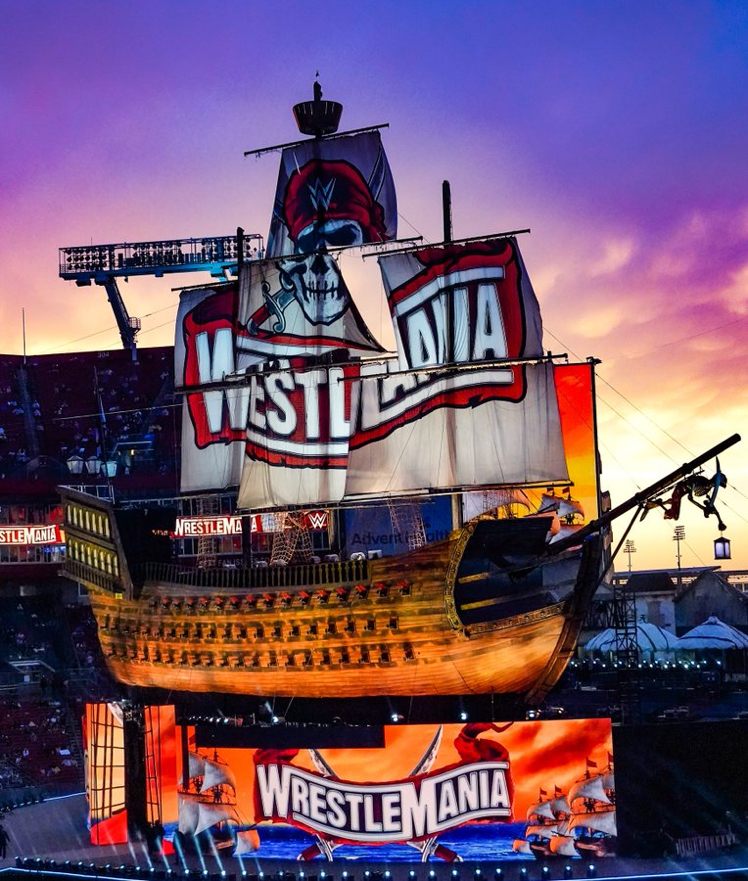 Last Saturday and Sunday, World Wrestling Entertainment (WWE) hosted their biggest show of the year, Wrestlemania. The 37th edition of one of the most consistently eccentric events in American entertainment delivered an exciting mix of pop culture, pyrotechnic production flare and exhilarating in-ring action from some of the best athletic performers in the world.

Billed as “The Showcase of the Immortals,” Wrestlemania emanated this year from Raymond James Stadium in Tampa, Florida. In what was the first time since the beginning of the COVID-19 pandemic that WWE produced a show in front of a live audience, the company hosted more than 50,000 screaming pro-wrestling fans over two nights for the event.

The show began Saturday night with a sobering moment of sincerity, as the WWE performers who’ve spent the last year wrestling in empty buildings stood out on the stage and received a standing ovation from fans in attendance. The camera panned brilliantly between teary-eyed pro wrestlers and diehard fans, in what was a goosebump-inducing open to the action.

Banks and Belair came across as stars in their show-stealing performance. Their position at the top of the card is hopefully a sign of progress for an industry with a history of mistreating women and minority performers.

Also noteworthy was the professional wrestling debut of Puerto Rican rap superstar Bad Bunny. Alongside his partner Damian Priest, Bunny (a musician with an enormous international following and billions of streams for hit songs like “Dakiti” and “La Noche de Anoche”) wrestled the vast majority of a 15-minute long tag-team match against bad guys The Miz and John Morrison.

Taking to professional wrestling like a fish to water, Bunny wowed fans by performing all sorts of high-flying maneuvers in what was probably the most surprising and fun match of night one. Apparently he trained for months prior to his Wrestlemania match – and it definitely paid off – as he received a chorus of cheers from fans following the match.

Several other media personalities appeared throughout the two nights. Recording artists Bebe Rexha, Ashland Craft, Wale and Ash Costello were all featured in musical performances. YouTube personality Logan Paul participated ringside during the Kevin Owens vs. Sami Zayn match. Paul ultimately delighted the crowd by taking a beating from Owens after the match.

The in-ring action was generally better on night two, as young-upcoming performers like Matt Riddle (a former UFC standout and apparent marijuana enthusiast) and Rhea Ripley (an Australian powerhouse) delivered spectacularly-athletic and hard-hitting pro wrestling action during their matches.

As Raymond James Stadium is the home of the NFL’s Tampa Bay Buccaneers, Wrestlemania was pirate themed. The main stage where performers made their entrances out of was fashioned into an enormous pirate ship, and hosts Titus O’Neil and Hulk Hogan appeared in pirate costumes Sunday night.

Similarly over the top was the special effects and pyrotechnics used throughout Wrestlemania. No expense was spared, as there were an abundance of fireworks and explosives, flashing lights, gigantic LED screens, laser beams and even animated CGI figures used throughout both nights.

If you’re reading this article and thinking to yourself “gee, I haven’t heard anything about WWE in forever,” don’t worry, you are not alone. The company has seen a steady decrease in interest and its audience over the past decade or so.

Despite declining viewership and the loss of wrestling stars like John Cena and The Undertaker in recent years, the company has been more profitable than ever. Hugely lucrative TV deals, a heavily criticized relationship with Saudia Arabia and a new $1 billion deal with streaming platform Peacock have ensured WWE’s financial stability for years to come.