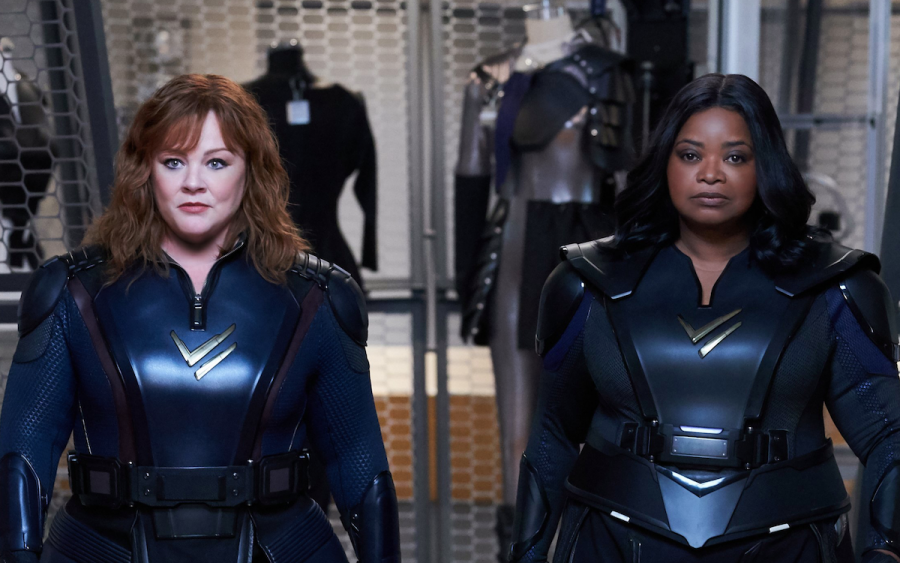 Photo courtesy of Den of Geeks

Melissa McCarthy and Octavia Spencer in "Thunder Force." The movie was like a charged up Disney Original Movie.

Lydia (McCarthy) and Emily (Spencer) are nothing-alike best friends growing up in Chicago — a town threatened by primarily sociopathic super villains called miscreants, who got their powers in a cosmic-blast and by whom Emily’s parents were killed.

In light of her parents’ untimely deaths, ultra-smart scientist Emily is on a mission to give normal humans superpowers to take on the miscreants.

Emily eventually succeeds, and plans to give herself powers (super-strength and invisibility) in modernized Captain America/Winter Soldier style, but things go awry and the spontaneous, quirky Lydia accidentally gets Emily’s super-strength injection. Emily is left to take the invisibility pills, and the two of them plan to face the miscreants together.

For a movie this rough, the acting was oddly convincing. McCarthy and Spencer bounced off one another while harnessing their own character’s individuality, and Bateman brought on his sarcastic, chill comedic tone as the actually not-bad, bad guy. Emily’s daughter Tracy (Taylor Mosby) was also a highlight — her character was by far the most likable.

I will say though, Bateman’s miscreant half-villain character had crab arms, which really threw me off. The movie tried to explain this, but I was just confused. Apparently it happened on his honeymoon where he swam over a radioactive coral reef — making him a miscreant somehow. It’s not worth explaining and frustratingly random.

The plot and story just didn’t feel developed enough. I knew who the bad guys were, but I couldn’t understand their motive. Granted, that could just be me missing key information, which I’m known to do in my life.

At times, it felt like I was watching Disney Channel. Don’t get me wrong, some Disney Channel Movies deserve Academy Awards and have changed my life (I love you, High School Musical), but for a movie with actors as talented as this, I was let down.

I also despise when grown adults do the stupidest things in movies. I understand it’s all part of the plot and often exaggerated because it’s, well, a movie, but when the entire plot is based on one extreme chain of events committed in a moment of sheer ridiculousness, I get annoyed.

Lydia was equipped with super-strength only because she “distractingly” clicked 3 major buttons in Emily’s super-techy lab and proceeded to “fall” onto a giant lab chair. Remember — she is supposed to be in her mid-forties. Someone pushing 50 years old should be able to comprehend the “don’t touch anything” rule. They really shouldn’t need to hear it at all.

The movie’s premise had a good foundation: two middle aged women become superheroes and fight crime. It’s witty and different in theory — it just wasn’t done super well. Like I said, it felt like a really high-budget Disney Channel Original.

I really wanted to like this one, because I think the actors in it are spectacular. I mean, Spencer has an Oscar, McCarthy has been nominated, Bateman has an Emmy, but the whole movie was missing something.

There were moments that made me smile though, so it’s not all bad. It just doesn’t compare to other superhero movies out there.

If you’re looking for something extremely carefree and laid-back and you’ve got more than enough time to spare — go for it and check this one out, but don’t expect too much.