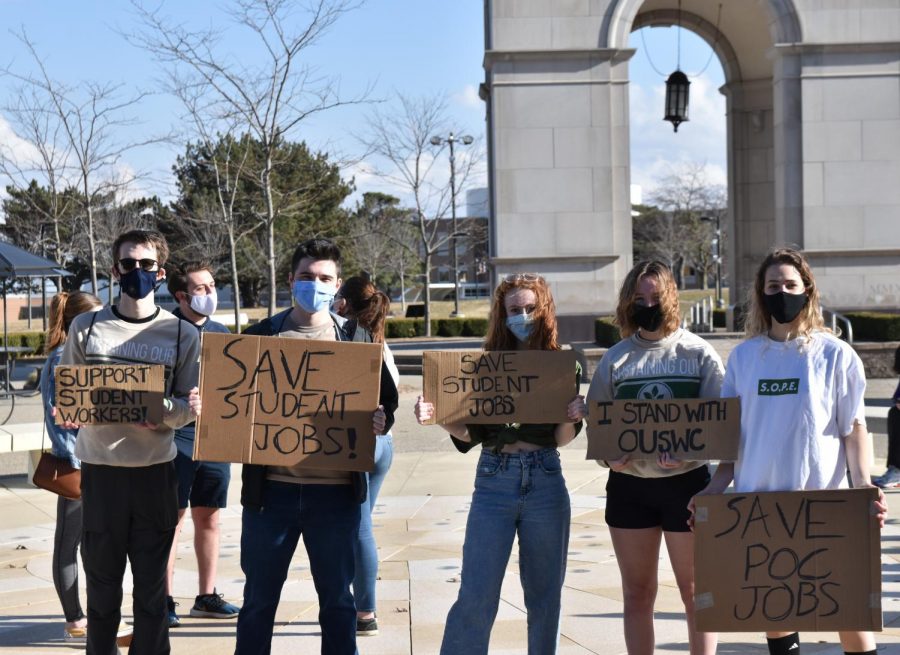 Students hold signs they prepared for the protest at Elliot Tower on Thursday, March 11. The protest turned into a celebration after some of their concerns were addressed the morning of the protest.

On Thursday, March 11, the Oakland United Student Workers Coalition (OUSWC) had its high watermark. Originally geared to protest a set of decisions made by Oakland University Housing over the past year, the coalition’s plans changed upon hearing two of their demands would be met. The OUSWC gathered with signs and megaphones around Elliott Tower to celebrate their accomplishments and energize the members for the long road to achieving more.

Established at an informal March 5 meeting, the OUSWC organized with the goal of reversing six decisions made by Housing: reinstating Sustaining our Planet Earth (SOPE), reinstating Nightwatch positions, ensuring desk attendants are able to work up to 25 hours per week (Housing proposed a reduction to 10 hours a week for the Fall 2021 semester), reinstating the Bear Bus, reinstate free housing for academic peer mentors (APMs) and preventing cuts resident assistant (RA) stipends. In support of this a petition was made and an Instagram account was set up to promote the organization. Plans were also made for a protest at Sunset Terrace on the afternoon of March 11.

When word got around about the protest, OU wasted no time responding. Housing Director Jim Zentmeyer asked to meet with the main organizers, though not much was accomplished at their first meeting. The parties met the next day, with OUSWC prepared to postpone their protest if SOPE was reinstated.

“We were hopeful that we could get one of our demands,” Torres said. “And if we could get SOPE back, we decided we would — as a show of good faith — postpone or cancel our protest. We were not ready to cancel it outright, but we were ready to postpone.”

Zentmeyer held firm, did not reinstate SOPE and informed the group that their jobs could be in jeopardy if the protest went through. However, the OUSWC was not too worried about the possibility of being fired. After all, student organizations like the Gay Straight Alliance and OU Feminists would have a presence at the protest, and OU had worked with progressive student groups in the past.

But on the morning of March 11, an email came through from Associate Dean of Students Jesse Hurst and Zentmeyer stating President Ora Hirsch Pescovitz allocated CARES Act funds to reinstate SOPE and Nightwatch for the 2021-2022 school year. With two of their demands met, OUSWC canceled the protest and scheduled an impromptu celebration at Elliott Tower. However, the threat of termination did not go away with the celebratory tone.

“Zentmeyer repeatedly told us the day before … that he could not guarantee the continuation of our jobs if we were to attend,” Sines said. “He said it would be ‘grounds for termination’ if we were to attend a protest. Once SOPE and Nightwatch came back it was said quite often by Zentmeyer that he was looking forward to our continued collaboration and that his door was always open. He genuinely did seem to genuinely be looking forward to working with us.”

After the celebration, there was little contact between OUSWC and administrators. Johnson reached out to Glenn McIntosh, senior vice president of student affairs, and John Beaghan, vice president for finance and administration, to discuss how to bring back the Bear Bus and other issues. A meeting on March 23 was discussed, but Beaghan was not guaranteed to be present and representatives for McIntosh stated he would only be able to take part in an in-person meeting. In the end, no meeting was confirmed.

“It really felt like they were trying to stall us out by not answering any of our questions and not setting up meetings with us,” Johnson said.

Tolbert reached out to Zentmeyer after the celebration about a meeting to discuss disproportionate firing practices by Housing.

Tolbert saw that her supervisor was directly involved in the issues she wished to speak about, and she found it uncomfortable when Zentmeyer forwarded her concerns to her supervisor, who replied to Tolbert’s email. More emails were exchanged between Zentmeyer and Tolbert, who was also in communication with the other four key organizers about the situation. The five decided they would go to Zentmeyer’s office to discuss their issues with him.

On Friday, March 19 at 2:30 p.m., four of the five key members, except Torres, entered Zentmeyer’s office in Hamlin Hall. Originally leaving after a desk worker told them he was busy, Romano, Tolbert and Johnson returned around 3 p.m. assuming he was in a meeting that would be over by the top of the hour. After conversing with the desk worker — directly asking if it would be considered “annoying” if they stayed in the office — the three waited for another 20 minutes before learning Zentmeyer wanted to meet with them in room 401.

The trio waited another few minutes until Zentmeyer entered the room.

“[Zentmeyer] walked up to the front of the room [and] he had some papers in his hands,” Tolbert said. “He set them down and immediately started ranting at us. He started going through the demands of our petition, going through those points one by one telling us why he could not do them or why [the contents of the petition] were misinformation.”

“He specifically said ‘On your social media accounts you have painted me as a dismissive liar’ and he held up the post, which was printed out black-and-white and he had highlighted specific points in the post,” Tolbert said. “He held [the post] up, opened it up and then folded it and slammed it down. I was standing in the front … I was very confused and I also did not know what was going on at the time.”

Confused about the contents of the post, Tolbert asked if she could see Zentmeyer’s copy.

“He started talking directly to me saying it was an issue I would not talk to my supervisors,” Tolbert said. “He also told us we were ‘camping’ outside his office … He said the words ‘You will not hold me hostage any longer.’ We were all very confused.”

At this point Zentmeyer told all five of the key members — including the two who were not at the meeting — they were immediately terminated from their positions. Johnson asked for clarification, but Zentmeyer would not provide any information and ended the meeting there.

Sines and Torres were informed of their termination via text message, and the members received short termination notices hours after the fact. The reasons cited were violation of their contracts and insubordination. No information for appealing the decision was included in the notices.

Zentmeyer declined to comment on the events, stating “it would be professionally inappropriate to publicly comment on [the OUSWC organizers’] employment status.”

The most immediate effect of the meeting was the OUSWC canceling their town hall with the OU chapter of the Young Democratic Socialists of America (YDSA) that evening. Following that, each of the five were effectively rendered homeless since their rooms were dependent on having a job in housing. Torres is still homeless with only the kindness of School of Music, Theater and Dance community members allowing her to live with them until the end of the school year.

But despite this, the OUSWC remains undeterred. The town hall with YDSA is rescheduled for April 16 from 4-5 p.m., the key five members feel emboldened by OU’s actions and legal action is being taken regarding their firing.

“Although we are not employed anymore, I do not think it was just about us being employed,” Romano said. “Our message was always advocating for things that even had nothing to do with us. We were an advocate for all jobs. Us being fired has not stopped any of us, it has not slowed us down.”