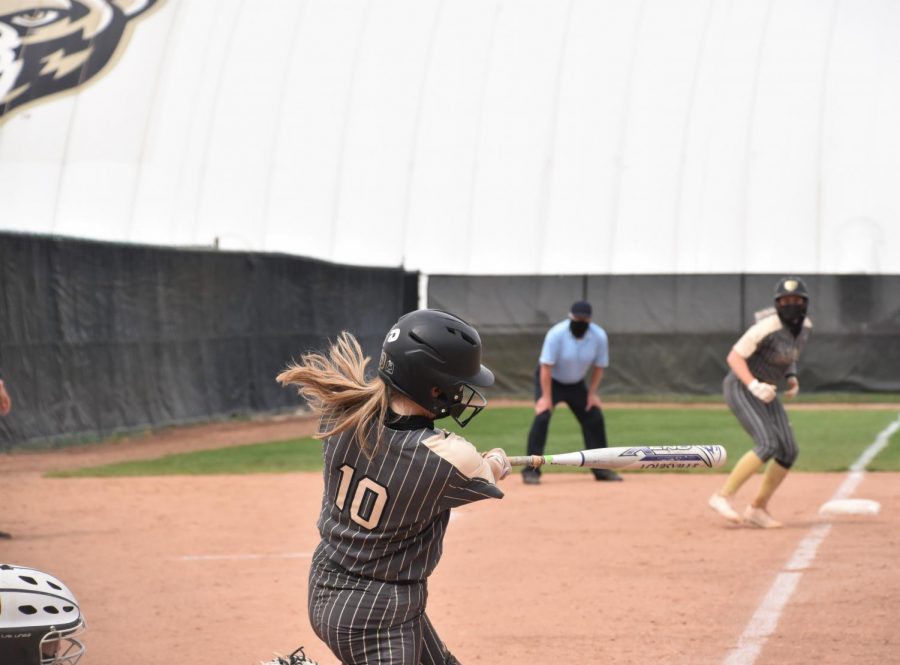 Jamie Squires squares up on a ball against Cleveland State. Squires set the OU record for RBIs with her grand slam.

The Oakland University softball team extended their winning streak to eight games with a sweep of the Cleveland State Vikings April 9-10 at the Oakland Softball Field.

The Vikings struck first in game one of Friday’s doubleheader — but it would be all Golden Grizzlies from there.

A four-run third inning would be all the Golden Grizzlies needed as starting pitcher Sydney Campbell pitched a complete game, allowing one run on 11 hits with no walks and striking out three. Lauren Griffith’s three-run home run in the third inning proved to be the difference as Oakland took game one.

Cleveland State struck first in game two as well, with a two-run home run from right fielder Sydney Bajusz. Oakland got a run back in the bottom of the first with a sac fly from Jessie Munson, then Jamie Squires singled in two to give the Grizzlies a 3-2 lead.

Jen Krizka singled in another in the sixth, making it 7-4, and two runs would score on a wild pitch to make it 9-4 — the final score of game two as the Grizzlies swept Friday’s doubleheader.

Head Coach Lauren Karn was pleased with her team’s performance in Friday’s doubleheader.

“Overall I thought we did a really nice job on the mound, offensively [and] defensively,” Karn said. “Our pitchers are taking an inning or two to settle in with minimal damage done, and then our offense is obviously getting us back in the game. Once our pitching settles in, we’re pretty tough to score off of. Our defense is doing a really good job at minimizing any damage that’s happening, and coming up with some really clutch plays when we need them.”

In game one of Saturday’s doubleheader, it was the Grizzlies who got out to an early lead, putting up three runs in the first inning. They never looked back, with the offense clicking the whole way. Munson and Cammie Brummitt had two RBIs apiece.

On the mound, Campbell pitched another complete game, allowing just one run on seven hits with four strikeouts and no walks. Oakland took game three, 8-1.

The series finale was pretty low-scoring until the bottom of the fifth inning — OU had a 2-0 lead when Squires hit a grand slam to break the game open. The four RBIs made her the new school record holder with 98 career RBIs. The Grizzlies would go on to win the game 7-2, sweeping the series and increasing their winning streak to eight games.

Karn said her team isn’t focused on the winning streak, but rather the task at hand.

“We’re just staying pitch by pitch, inning by inning,” Karn said. “We haven’t talked about a streak at all — I didn’t even realize  we were on a streak until I checked Twitter. I think part of that is when you’re staying focused in the present, you’re not worried about what you just did and you’re not worried about what’s happening in the future, you end up having more success.”

Next week the Grizzlies head to Youngstown State University to visit the Penguins for a four-game series. First pitch is Friday, Apr. 16 at 3 p.m.