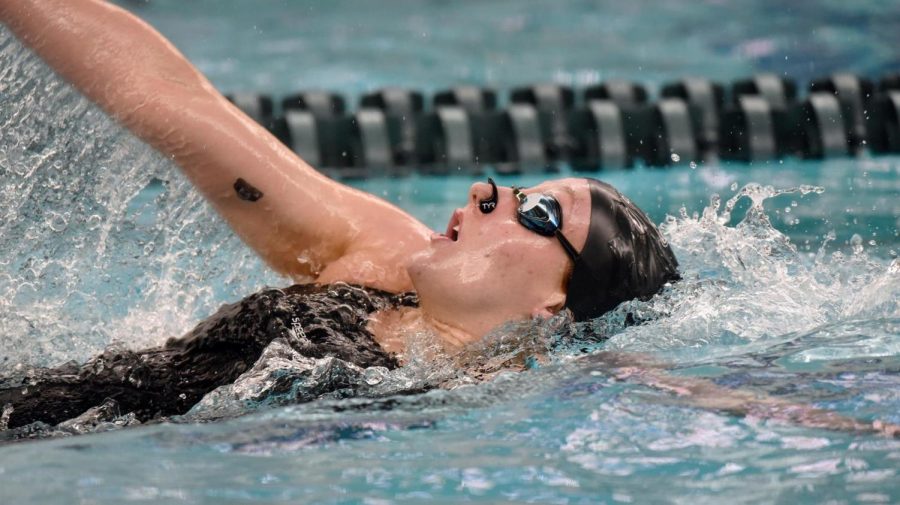 Susan LaGrand competing in a past meet. LaGrand represented Oakland at the NCAA Championships from March 17-20.

Oakland University swimmer Susan LaGrand has had an extremely successful season — winning Horizon League Swimmer of the Week three times, United Wholesale Mortgage Student-Athlete of the Week in March and competing at the NCAA Championships, where she received Honorable Mention All-American Honors, beat a school record in the 200 backstroke and a personal best in the 100 backstroke.

Not only is LaGrand winning award after award, she’s doing it with a humble, hardworking and personable attitude.

“It didn’t hit me until we arrived at the pool [for the NCAA Championships] that I had even qualified,” LaGrand said. “It didn’t feel real until I actually stepped in there and looked across and saw these girls who win the national championship. [I couldn’t believe I was swimming] in the same pool as [them].”

“I was standing behind the blocks for my first race and the butterflies were going, the hands were shaking,” LaGrand said. “But once I dove in and hit the water, every plan we worked on took effect — it’s the same events every time, the same water every time — focus on the things that are the same, and find the normal in your race.”

As a junior majoring in clinical and diagnostic science, LaGrand has plans to go to medical school. She started swimming when she was eight, but really started to find her way freshman year of high school.

“I started swimming competitively when I was about eight, which is kind of late in the game if you ask a lot of other swimmers,” LaGrand said. “I wasn’t that great — I wasn’t bad, but nothing special. It wasn’t until freshman year of high school that I won the state meet in the 100 fly as a freshman out of nowhere. Ever since I was little, I wanted to swim in college and bring it a step further. I felt like this was something I was going to stick with.”

Gearing up for the Horizon League Championships, which run from April 5 through April 10, LaGrand is ready to focus on what she can control and help out the team.

“I like to make goals that are me-based, not them-based,” LaGrand said. “Winning or doing things based on other people are harder goals to achieve because they aren’t necessarily things [I] can control. The goals for Horizon’s are to do what the team needs me to do — be fast for relays, individually get my hand on the wall first regardless of the time. It’s nice to just be able to swim and not worry about the time but rather make sure I get the points for the team.”

“I feel [writing goals down] is better than mentally having them there,” LaGrand said. “I hesitate to tell people my goals because if I don’t hit them then it’s not just me being disappointed, but I push myself to. I have to see them in order to achieve them.”

At the end of the day, LaGrand’s mindset is to just swim.

“[The coaching staff have told me] you just have to swim — that’s what you’re good at, just swim,” LaGrand said. “Having that mindset kept me motivated. Just doing it for fun allowed me to hit the goals I didn’t even know I had. If you’re enjoying what you’re doing, you’re going to do a lot better.”