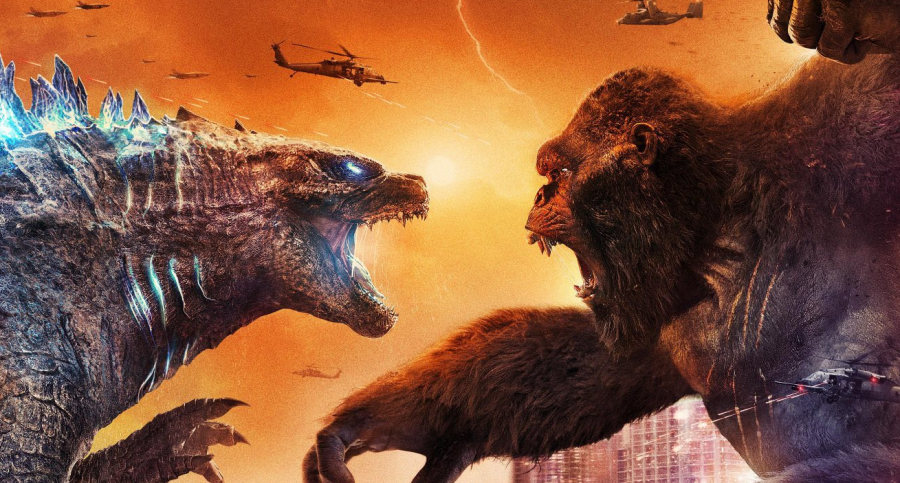 Godzilla vs Kong is a great way to indulge your inner child with giant monsters fighting.

Like the Grinch on Christmas day, my heart grew three sizes watching Godzilla and Kong fighting to the death this Easter weekend. So, my dear friends, indulge the wide-eyed child in your soul, don’t ask too many questions about storylines or plot points and buckle in for one hell of a thrill-ride.

The fourth installment in this new iteration of the Godzilla cinematic “Monsterverse,” following “Godzilla” (2014), “Kong: Skull Island” (2017) and “Godzilla: King of the Monsters” (2019), “Godzilla vs. Kong” finally gives fans the epic showdown they’ve been waiting for between the two “alpha titans” of the series.

A much anticipated release, the film is on track to do huge business for both HBO Max and as a theatrical release. In all likelihood the movie will claim the title of highest grossest box-office performance since the beginning of the COVID-19 pandemic grinded Hollywood to a standstill.

The cast of the film features familiar protagonists of the series Madison Russell (Millie Bobby Brown) and Mark Russell (Kyle Chandler), alongside an endearing ensemble of characters like Dr. Ilene Andrews (Rebecca Hall), Nathan Lind (Alexander Skarsgard), Bernie Hayes (Brian Tyree Henry) and Josh Valentine (Julian Dennison). For the most part the characters are charming and successful in fulfilling their role of existing and progressing the story while Godzilla and Kong steal the show.

Mankind, which has been reeling since Godzilla and the other titans of the earth awoke in recent years, faces two chief-calamities in the beginning of this film.

First — Kong has grown too large and powerful for monster-wrangling agency MONARCH to keep him hidden from Godzilla in containment on Skull Island. The fear that Kong will leave the island and Godzilla will engage him in a potentially world-ending clash of the titans has become reality and must be dealt with.

Second — Godzilla has become agitated, lashing out for the first time since King Gidorah was defeated three years ago, destroying a coastal city in a seemingly random attack. As the film unfolds, we learn that the attack wasn’t random and a new enemy emerges that pushes Godzilla and Kong to the brink.

The first major engagement between Godzilla and Kong occurs in a fantastically absurd scene at sea. Godzilla intercepts a naval convoy led by Andrews and Lind that is transporting Kong to the front door of his new home in Antarctica and the madness begins.

The two titans slug it out among battleships and aircraft carriers, until Kong is nearly slain and the humans in charge of the ships decide to kill the engines and play dead. Licking its own wounds, Godzilla then triumphantly swims away and the crew in charge of moving Kong decide to take a new approach to their transport.

The next monster-centric scene shows Kong being airlifted into the frozen tundra and dropped down in front of a giant hole that apparently leads to the ancient home of the titans, the “Hollow Earth”. Kong is urged inside this hole on the promise that there could be more giant apes. While we never see more Kong-like creatures in the film, the prehistoric wonderland Kong and the rest of the human crew explore yields plenty of secrets about the origins of the titans.

Elsewhere, as all this is going on, an unlikely trio of heroes emerges when nosey-teens Russell and Valentine team up with paranoid monster-truther Hayes to get to the bottom of Godzilla’s random attack on Pensacola, Florida. They soon unravel the dark intentions of Apex Cybernetics, a corporation building technology to eradicate the titans and put humanity back on top of the food chain.

In the end, the discoveries made in the Hollow Earth and at Apex’s compound come to a head near the MONARCH and Apex facilities in China. Godzilla arrives and, sensing Kong, uses its thermonuclear breath to blow a hole 1,000 miles deep into the Hollow Earth. Kong climbs up the hole, and immediately it is on like Donkey Kong between the two monsters.

During this CGI master class of a closing sequence — the city is leveled, countless fictional human lives are presumably lost, Apex Cybernetics’ man-made monstrosity is defeated and Godzilla and Kong ride off into the sunset with a new respect for each other. In the end the two titans apparently decide that the town (earth) is big enough for the two of them, and what more could we all want than that?

Now the main drawing point of this film, the enormous fictional monsters Godzilla and Kong duking it out on a massive scale as mankind helplessly looks on, delivered and there’s no doubt about it. Still, the film was far from a masterpiece of modern cinema.

The story of the film is busy to say the least. Even with a runtime of 113 minutes, the movie is scrambling to jam in all necessary plot points around the grand scale monster battle scenes. If you’re someone who wants anything other than a surface-level understanding of what’s going on, this one could be frustrating for you.

The acting in the film is similarly wanting. By design or otherwise, the character with the most humanity in this movie ends up being the giant CGI ape Kong, as he continually endures abuse and overcomes all odds. Going in, I never anticipated the skyscraper-sized primate playing the role of plucky-underdog, but hey — somehow it works.

The tension-breaking humor scenes are definitely hit and miss as well. It’s going to be a matter of taste for viewers, but for me personally the ratio of eye-rolling comedy to genuine moments of levity is about 3-1. This is balanced out a bit by unintentional comedy moments that occur during the ridiculous monster battles, but still humor is not a strength of the film.

Despite all the periphery issues that could sink a lot of movies, “Godzilla vs. Kong” succeeds on the strength of its monsters. For whatever reason these massive city-flattening titans going to war with each other scratches an itch for millions of people across the globe. And yes, I am one of those people.