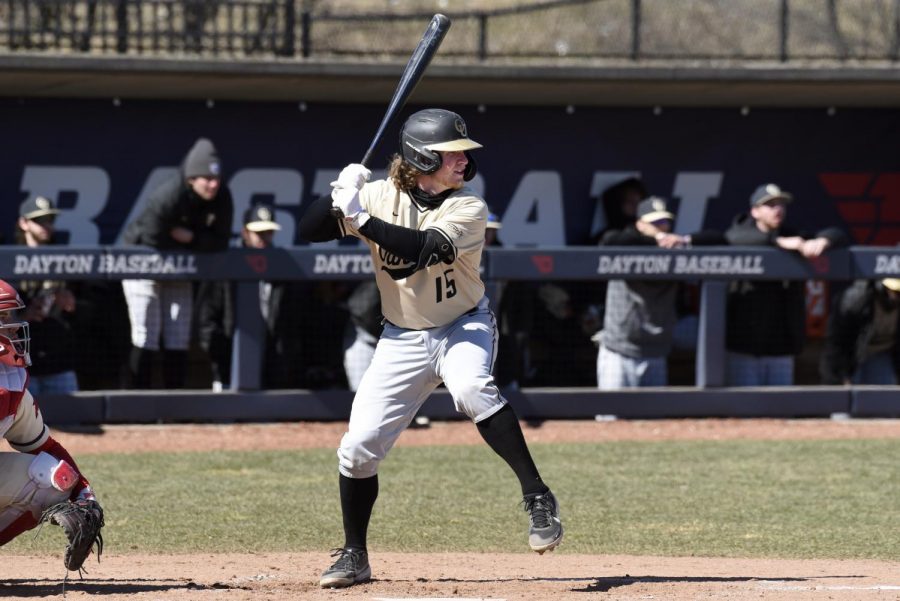 Jared Miller eyes up a pitch. Miller has a .432 on-base percentage this season.

Oakland Baseball infielder Jared Miller is always trying to get better at every aspect of his game.

“I think the minute you think you’re the best at something is probably the minute you’re never going to progress to the next level,” Miller said. “So I think [if] there’s one thing I can improve on, it would be everything — just keep doing the small things, and continue to up my game in the field or at the plate or base running, wherever. I can always get better.”

Miller believes his approach at the plate has stayed the same this year, despite the numbers not necessarily reflecting that (although he does have a .432 on-base percentage).

“[I’m] just trying to see the ball and hit the ball. [I’m] not trying to do too much, [but rather] what’s going to be best for the team, and trying to make situations work how they need to go — [listening] to the coach and [getting] it done,” Miller said.

“I think [Jeter] has always done a great job of being a leader with everything he’s done — he’s a great influence,” Miller said. “[I want] to follow and represent the game like he did.”

“[Miller] really gives you quality at-bat about every time,” Banfield said. “I think he’s got [16] walks, a couple triples, hits leadoff every day, and will play absolutely anywhere we [ask]. Our shortstop (Lorenzo Elion) has been down the last couple weeks, and he’s played short and handled himself really well.”

Miller said it “feels great” that his coach sees him as one of the team’s best offensive players.

“I wish my numbers would match what he’s saying,” Miller said. “It’s very nice for him to say [that and] it’s always great to hear, but I think I need to start locking it in at the plate and getting it done — hopefully the ball will start finding some holes and getting a few more base hits will lead to more wins.”

In his free time, Miller enjoys being outdoors — preferably hitting up the beach.

“I love going to the beach whenever it’s possible,” he said. “I love getting to the warm weather. But also I’m from Colorado, so being up in the mountains, going on hikes and finding beautiful lakes up there is definitely something I enjoy doing as well.”

Miller said the team will have to stay focused and “locked in” in order to get back on track.

“I think the last game we played, although it was a loss, showed a lot of life,” he said.

In said game, the Grizzlies took a 2-1 lead into the ninth inning before the University of Illinois – Chicago (UIC) put up four runs in the ninth to take the victory.

“[Not just] our dugout focus, but also the focus we had on the field, [which was] way better than it had been for the last couple of games,” Miller said. “So I think it’s [going to] take all of us coming together, locked into every pitch and I think that’s going to lead to some more wins”

Miller believes if the team can continue making strides, they could make an impact moving forward.

“We played a way better game and [were] way more competitive —  it’s way more fun to be in those games than the other ones.  I think  as long as we can keep making strides in that direction, we will definitely be on the right track to make a little statement here in the upcoming games.”