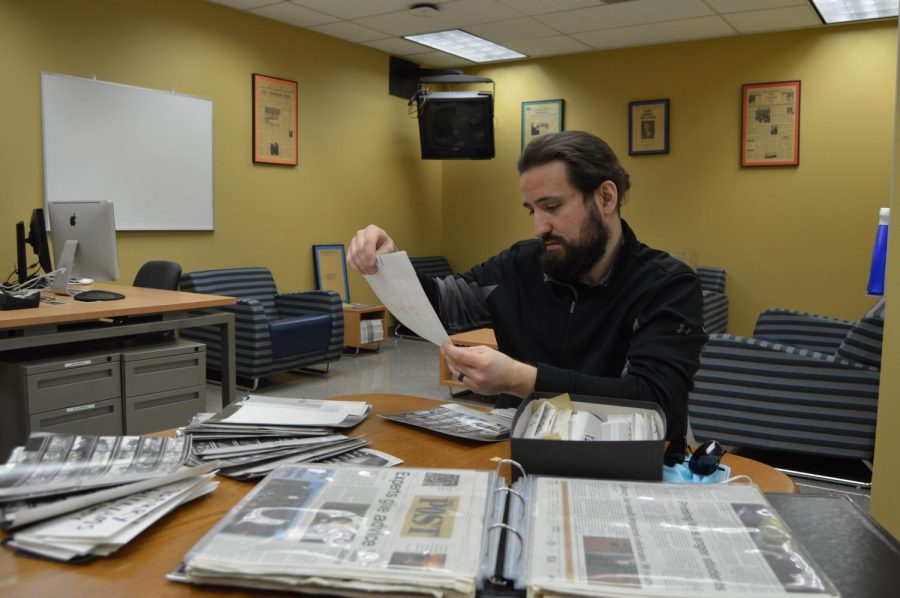 Horatiu Zglimbea sorts through the Oakland Post’s photo archives to add to “Oakland through the decades.” This is an ongoing project he’s working on to inform more people about OU’s history.

“Oakland University through the decades” will be a compilation of five minute video snippets, orchestrated by Horatiu Zglimbea, video production coordinator and producer.

After completing a reunion video to honor 1970 alumni, Zglimbea was drawn to OU’s history, but found few resources that didn’t feel “dense.”

Normally, class reunions are celebrated in person at the library with a display of archived photos from alumni’s time at OU, but the pandemic made the gathering shift online. With an online format, Zglimbea was introduced to the now-video celebration, which ignited his passion to tell more of OU’s history.

“Instead of getting [alumni] into Kresge Library to walk into the tiny space [where the archives are] and see photos, it would be a 20 minute documentary movie that they could watch at a specific time on YouTube,” Zglimbea said.

His reunion video made archives from the 1970s more accessible to the class, but the majority of the photos still hadn’t been shared with the entire OU community.

“I was like, ‘Man, I want to do more of this because we have all these pictures, and nobody sees them,” Zglimbea said. “Even that video hasn’t been put out on YouTube for the masses. It was just a one time event, and then nobody else has seen it.”

With the help of archivists — Dominique Daniel and Shirley Paquette — Zglimbea has begun sorting through thousands of photos to add to his videos.

Many of the photos were from Kresge Library’s archives, but he also uncovered some photos from student organizations — including the Oakland Post. Most photos from these organizations have never been publicly available, so Zglimbea’s videos will be its first debut.

“Oakland University through the decades” will be available on OUTV, and he’s donating the collection to the communication and marketing departments to use.

Thus far, he plans on offering videos about the presidents of OU, mascots, university origins, groundbreaking and further construction timelines. “Oakland University through the decades” could span into other categories too though.

Finding together photos to match a script can be “difficult to keep together.”

He wrote a “super cool script” about John Dale Russel — who was a key community member during OU’s origins — only to find there are very few photos that exist of him. Then he had to adjust his video plan, avoiding a lull in visuals.

Despite challenges, Zglimbea wants to share the history he’s unraveling with people who may not have experienced it before.

There are many historic markers tucked away across campus — records, articles, art, buildings and photos — but Zglimbea’s video series will be a one-stop learning tool, compiling history.

“I just want students and people in the community to really become informed and just appreciate where Oakland came from,” Zglimbea said.