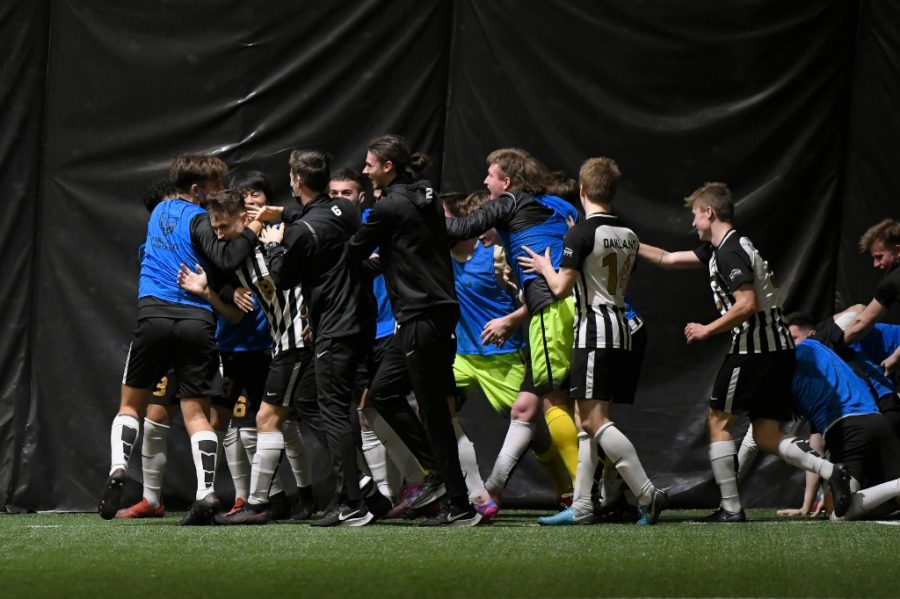 The men's soccer team celebrates a goal vs. Detroit Mercy. The Golden Grizzlies won, 3-1, and moved to 3-1-1 in the standings.

Men’s soccer defeated their cross-town rival, the University of Detroit Mercy (UDM), 3-1 as Dylan Borczak once again put multiple points on the board.

Borczak, who was named United Wholesale Mortgage Student-Athlete of the Week, scored the first and last goal, as well as assisted Charlie Braithwaite on the go-ahead goal in the 64th minute.

At the exact halfway point in the season, Borczak leads the Horizon League in shots (22), points (16) and goals (seven). The Golden Grizzlies are in the top third of the table as well, with an important game coming up against the Wright State Raiders on Saturday, March 6.

“Sitting in first place at 3-1-1 at the halfway point of the season, we are pleased but not fully satisfied, as in all reality we could be 5-0,” Head Coach Eric Pogue said via email. “But with 19 new players this year, we knew it might take a little time to gel completely. The depth of our team is a strength that we have leaned on in the first half of the season”

That depth was shown in the 3-1 win over Detroit. Borczak totaled five points with his two goals and assist, but Ville Ahola, Noah Jensen and Dawson Schrum also recorded assists.

Braithwaite, who scored the winning goal, also pitched in on Borczak’s second goal, hitting Schrum with a long pass to get Borczak into scoring position.

“We have a lot of great players on our team, which I think helps put Dylan in good positions,” Pogue said via email.

Detroit’s lone goal came on a corner kick at the end of the first half, in the 36th minute. After the cross, two UDM players got their head on the ball, which found Isaac Shiner, who was in the right place to put one past goalkeeper Nour Moaoui.

Pogue felt despite the draw at the half, his team had played well and put themselves in a good position. The key was to continue to limit set pieces like the one Detroit scored on.

“We played a very good first half, so we were pleased with our play and wanted to continue to outplay them, particularly in wide areas,” Pogue said via email. “With UDM, you have to stop them on the counter attack and limit set piece chances, which I think we did a nice job of.”

With another win against Detroit, Pogue’s record in the past seven years sits at 5-0-2. The team is still undefeated against Detroit in almost a decade.

“It’s never just another game against UDM, as we know we are going to be in for a battle, but we also don’t benchmark our season on whether we beat UDM or not, as we have bigger goals than that,” Pogue said via email.

Those goals are to beat the top of the top in the conference. Right now, the only team above Oakland is the University of Illinois-Chicago (UIC) Flames.

Next up for men’s soccer is a road trip to Dayton, Ohio to face the Wright State Raiders. They return home Friday, March 12 to face the Milwaukee Panthers.