Oakland baseball team set to get back on the field 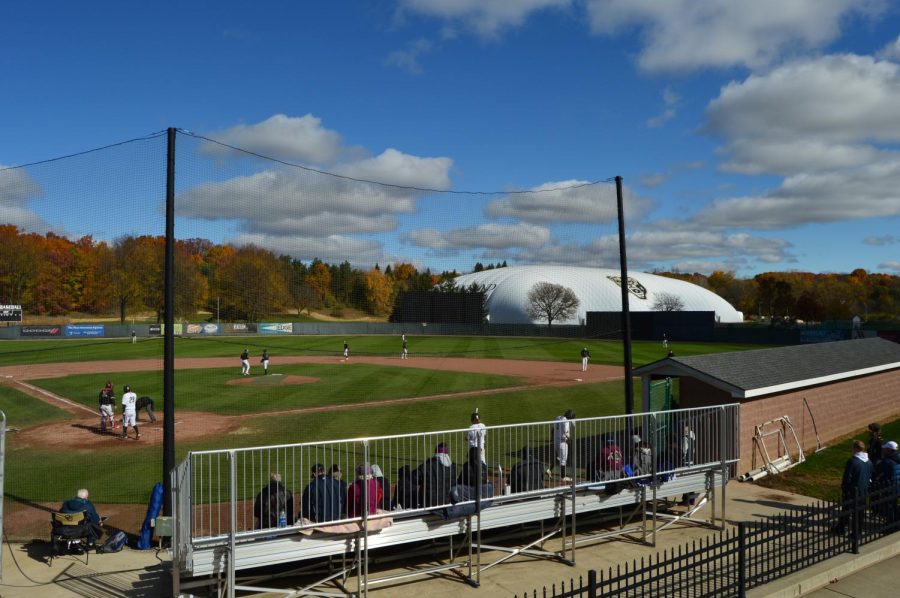 The baseball team held game two of their fall world series on Saturday, Oct. 24. Their season will resume on Friday, Feb. 19.

The Oakland University baseball team is set to take the field for the first time in 11 months, starting their 2021 season Friday, Feb. 19 at Middle Tennessee.

Head Coach Jordon Banfield said the team is ready for the season to begin.

“I certainly know that our guys deserve a real season and I’m glad that’s going to happen — I’m certainly ready to get on a bus and get outside,” Banfield said. “Even if it’s 40 [degrees] in Nashville next Friday, that’s fine with me.”

The Golden Grizzlies are coming off a season in which they finished 2-10 overall, with the conference season being completely wiped out due to COVID-19. Banfield was hired on May 29, 2020, which would have normally been during the tail-end of the season.

“The timing of how early the process started was definitely unique,” Banfield said. “It was a longer process than probably normal — the situation where nobody was playing certainly allowed for that, but also made it difficult because everything until the end [of the offseason] was Zoom or phone call, all that kind of stuff.”

Banfield said the offseason was different just because of “the amount of hoops we had to jump through.”

“The summer was definitely different because I couldn’t go watch a game,” Banfield said. “That’s what I do every day during summers, I go recruit. I think the thing that I would say has been the toughest to overcome is the lack of being able to get in the weight room as much as usual with the number of people that are allowed in there and that kind of stuff. That’s been the biggest negative for me and the thing that’s held us back.”

“Obviously there’s a lot of things going on right now that are kind of out of your control so you just have to stay on top of what you can control,” Rutan said. “That’s really the biggest thing, whether it’s a physical aspect or a mental aspect, just taking pride in what you do, and being ready to go whenever your number is called.”

Rutan, a senior and the captain of the team, spoke about the importance of his leadership ability.

“It is going to be my top priority this year, obviously, aside from my performance on the field,” Rutan said. “I’m a relief pitcher, so I won’t be in every game. And when I am it’ll be a couple of days here and there. So it’s a very important role for me.”

Banfield said while he’s never coached a game in the Horizon League, he expects it to be competitive.

“I’ve never shown up to a game expecting to lose,” Banfield said. “Obviously, at the top of the league — I mean Wright State, year in and year out has really dominated the league lately — and they are a really, really high end national program. So for me to come out and say, ‘we’re gonna be better than that,’ that’d be ridiculous. That said, we show up to play and I expect to win.”

Rutan also said he likes the team’s chances this year.

“We play in a very competitive conference,” Rutan said. “Wright State and UIC have been at the top, especially [during] my time here. Youngstown State is bringing back a lot of [returning starters]. So everybody can beat each other. At the end of the day, it comes down to who doesn’t beat themselves to come out on top.”