Micah Parrish is ready to lead crop of freshmen 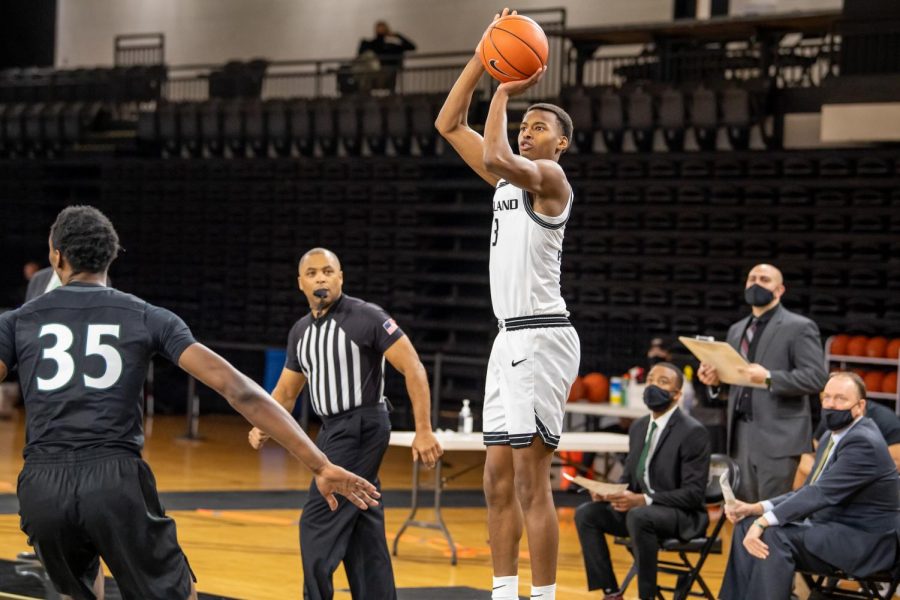 “I think all our freshmen right now from Joey [Holifield], to Chris [Conway], Trey [Townsend], me and PJ [Joseph] — I feel like this freshman class is gonna be a great class and I’m really excited for the future with all of us,” Parrish said.

Parrish, a native of Ypsilanti, MI, said there weren’t many additional challenges that came with being a freshman during the pandemic.

Parrish has some big aspirations for his career at Oakland.

“Hopefully a national championship appearance, even a ring,” Parrish said. “I just see big things. I want to achieve the biggest things that we can accomplish.”

“Just his game — his defensive intensity, how he can score in the post, his threes, his mid-ranges, he’s a very good player,” Parrish said.

In his free time, Parrish likes to play the Madden NFL games.

“I’m really good at Madden,” Parrish said. “Other than that, there’s not much else I really do.”

“I thought we had something pretty good [when we were recruiting him],” Kampe said. “But he’s been probably even more exciting for me than I would have guessed. He’s got a really good chance of being a super, super player.”

“He wants to win,” Kampe said. “He takes it out on himself a little too much and doesn’t like me screaming and yelling at him as much as I do. But, as he gets better and as he learns and grows I won’t [yell at him].”

Kampe said Parrish just needs experience in order to iron out the kinks.

“[Parrish] makes a mistake and learns from it— he’s really good at that,” Kampe said. “And that’s why I’m so high on him because I coach other players that will make a mistake, four times, six times before they learn and sometimes they don’t even look [at me]. But [Parrish] is a one time guy — he makes mistakes one time. He may not look like or act like he wants to hear me, but he hears me and he improves and I don’t see it again.”

Overall, Kampe said the team has a bright future with all of the freshmen, with Parrish leading the charge.

“This was a total rebuild,” Kampe said. “We mucked it all up a year ago, and we completely opened up the roster — I think we did a hell of a job in recruiting and putting ourselves in a position to get back to where we think we belong— where we used to be at the top of the league. If we can keep them all here, and they’ll work and grow and develop, then we’re going to meet those goals.”