Patience is a virtue, Lions fans 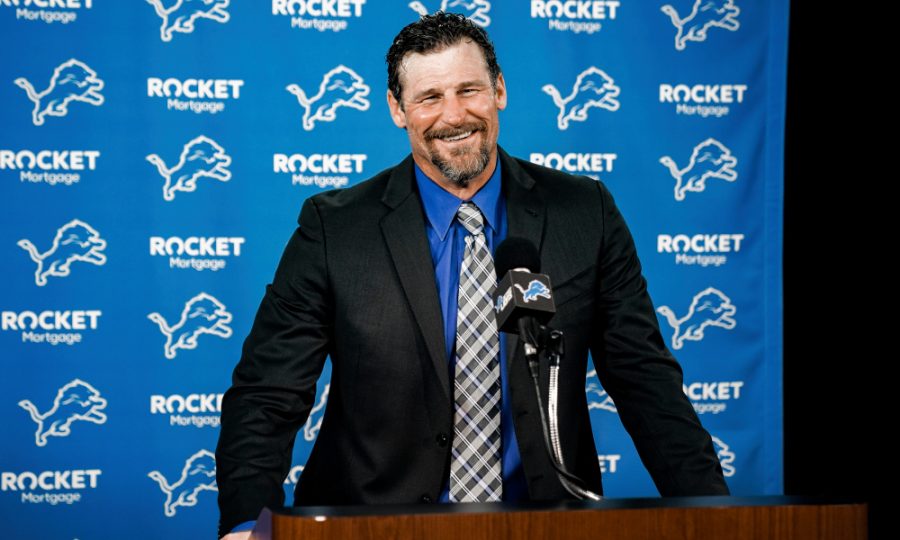 In this image provided by the Detroit Lions, Detroit Lions head coach Dan Campbell speaks during a news conference via video on his first day at the NFL football team's practice facility, Thursday, Jan. 21, 2021 in Allen Park, Mich. (Detroit Lions via AP).

After the failed “Patriot Way” experiment, the Detroit Lions have brought in a new regime to try to right the ship.

On Jan. 14, the team announced they had hired Brad Holmes to be their next general manager. Holmes was previously the director of college scouting for the Los Angeles Rams.

The team announced on Jan. 20 that Dan Campbell would be their next head coach. Campbell was previously the tight ends coach and assistant head coach for the New Orleans Saints.

Holmes and Campbell replace Bob Quinn and Matt Patricia, respectively. Holmes has played a big role in the turnaround that the Rams have seen in the last four seasons. Most people think it was all the work of head coach Sean McVay and GM Les Snead, but Holmes played a much bigger role than everyone realizes.

Most people saw that move in particular as an all-in move for the franchise. That was indeed the case, but wasn’t the only reason they made that move.

They had that much faith in their college scouting department — led by Holmes.

The Rams believed that Holmes and his guys would draft premiere talent in the middle rounds of the draft and for the most part, they were right. Listening to this podcast from Pride of Detroit provides more in-depth information on Holmes.

As for Campbell, there isn’t much to discuss about him. He actually played tight end for the Lions from 2006-2008, so he has a history with the team.

He was also the interim head coach for the Miami Dolphins in 2015. The Dolphins fired head coach Joe Philbin after a 1-3 start, then Campbell took over and led the team to a 5-7 record in their final 12 games.

Campbell has been praised for his leadership abilities, something the Lions organization stressed when looking for their next head coach. Matt Patricia was … whatever the opposite of a leader is.

It’s hard to tell how good of a head coach Campbell will be due to his lack of experience. His success will depend greatly on who he hires as his coordinators.

It has been reported as of Jan. 21 that he will bring in Saints’ secondary coach Aaron Glenn as his defensive coordinator — that would be a good start.

Campbell — a very fiery individual — said during his introductory press conference that his team is going to “bite a kneecap off.” Who wouldn’t want to run through a wall for this guy?

The more that comes out about Holmes, the harder it becomes to not like this hire. He showcased so much personality during his introductory press conference — it was a welcomed sight. There was also a report that stated Holmes had “bold plans” for the roster. What exactly those plans entail, only time will tell.

That’s the thing with both of these hires — they are both first-timers at their positions. It’s hard to have any expectations for them due to how little is known about them.

So a word of advice, Lions’ fans: keep your expectations low.

I realize neither of these guys were at the top of any fans’ list — most fans wanted now New York Jets’ head coach Robert Saleh for the same position. There was a lot of love for Indianapolis Colts’ assistant GM Ed Dodds for the GM position.

It’s easy to be frustrated about both of these hires. But it’s time to ask for something that is difficult to ask of Lions’ fans: patience.

Will this new regime work out for the Lions? We’ll have to wait and see.