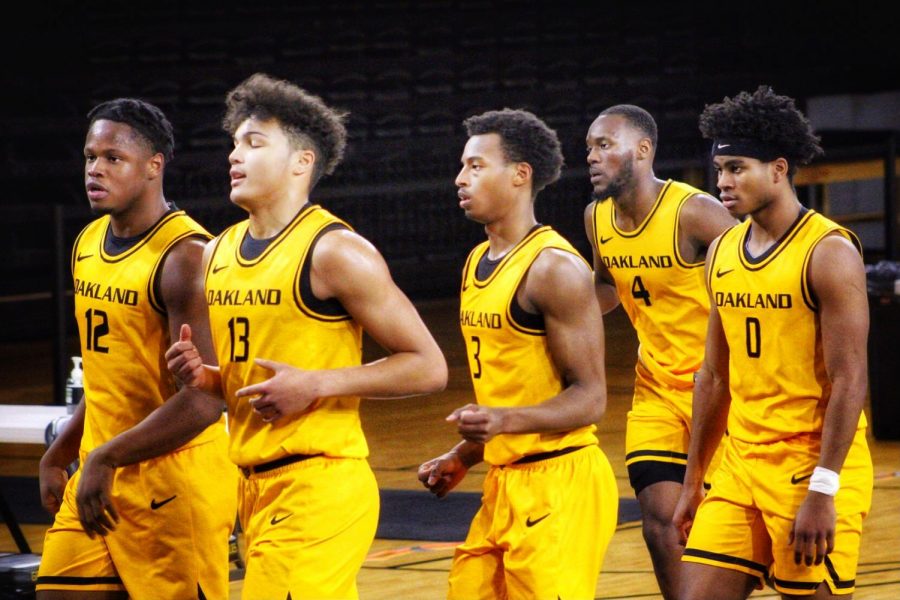 The Golden Grizzlies defeated the Penguins to improve to 5-5 in league play.

The Oakland University Golden Grizzlies defeated the Youngstown State Penguins 81-74 Saturday, Jan. 16 at the O’rena. The win marked a weekend sweep for the Grizzlies over the Penguins.

It was a slow start for the Penguins offensively, as they didn’t score for the first three minutes. After the first media timeout they heated up — especially Myles Hunter, who hit a few quick threes to give Youngstown State the lead. Then, the Golden Grizzlies went cold, with a 1-9 shooting stretch at one point.

The first half was headlined by a lot of missed opportunities for the Grizzlies — Jalen Moore got a few unlucky rolls on some layups and they shot just 23% from beyond the arc. Still, the game was well within reach, as they were down 41-39 at the half.

The Golden Grizzlies also got out-rebounded in the first half, 26-18. Head Coach Greg Kampe raved about the Penguins’ rebounding ability.

“They’re one of the best rebounding teams [in the league],” Kampe said. “That was their way to win the game and I think they emphasize that and they went in there.”

In the second half, the Grizzlies started fighting harder to get to the glass — returning the favor with a 21-13 advantage on the boards. The result was a back-and-forth game to start the half. YSU’s Garrett Covington, who led the Penguins with 16 points at the time, picked up his fourth personal foul with 11:03 remaining.

Kampe was pleased with the rebounding effort down the stretch.

“We did a great job on the boards in the last five minutes with the game on the line,” Kampe said. “I thought Trey Townsend, Micah [Parrish] and Dan [Oladapo] and everybody went in there and rebounded really well. So, I think we got the win because we really executed well down the stretch.”

Later in the second half, both teams went cold, with each team having scoring droughts of almost four minutes. Then, Moore started taking over —he had seven points in a two-minute stretch, followed by a huge stepback three. Moore finished with a double-double: 31 points and 12 assists. The 31 points are the second-most he’s scored in a game this season.

Kampe was impressed with Moore’s play, but says he still has a lot of work to do.

“Jalen’s got a long way to go,” Kampe said. “His main problem is that he’s preconceived. He [goes] ‘okay we’re running this play. And I believe that this is going to happen so I’m going to get it to him.’ No — and that’s where we’re butting heads.”

Kampe said Moore’s play in the last five minutes was as good as he’s ever seen at Oakland.

The Grizzlies improved to 5-5 in Horizon League play and 5-12 overall. Their next game will take place Friday, Jan. 22 against the Detroit Mercy Titans at 7 p.m. at the O’rena.