Jalen Moore looks to be OU’s next great point guard 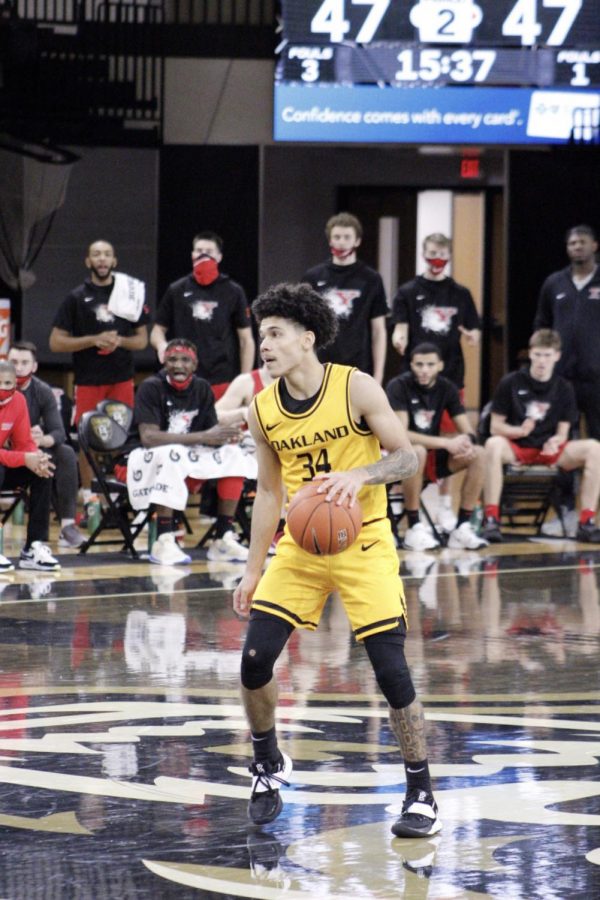 Freshman Jalen Moore is leading the Golden Grizzlies in points per game, with 18.6.

“[Watching Felder] was really eye-opening for me — I actually watched Felder growing up at OU,” Moore said. “He was good, and to see him get drafted at my height gave me a lot of motivation.”

Moore, who has yet to decide on a major, said he chose to transfer from Olney Central College to OU because it felt like the best fit for him.

“I think a lot of athletes mess up nowadays,” Moore said. “[They’re] just trying to go to a big name school, or somewhere they think is the best place, rather than a great situation for them. So based on the past history and past success of the point guard position, especially with Kay Felder, that was a big play in me choosing Oakland.”

Head Coach Greg Kampe sees some similarities between Moore and Felder, noting that they were both “5-foot-10 left-handed point guards.”

“Kay was one of the all-time greats at Oakland University,” Kampe said. “If Kay had stayed for his senior year at Oakland, he would have ended up being the all-time leader in the history of college basketball in assists — that’s what we sold to Jalen is that we’re gonna put the ball in [his] hands. Felder led the nation in assists and was third in scoring in the same year.”

Kampe went on to say that Moore has a very high ceiling.

“When he gets there, I expect him to be at the level of the other point guards that we’ve had,” Kampe said. “And I expect our team to be at the [high level] there is in our league.”

While this year’s circumstances aren’t ideal, Moore said there are positives he can take away from it.

“It’s an advantage for me because I get an extra year (of eligibility) for free,” Moore said. “There’s a positive of this COVID[-19] year right there.”

Moore said in order to help the Golden Grizzlies get back on track, he could be more of a leader, among other things.

“Things go rough, things go bad,” Moore said. “I gotta be the guy to step in and give everybody confidence, talk everybody through it and make sure I’m staying positive.”

Kampe admired Moore’s ability to get to the free throw line, and that’s what has led to Moore’s high point production. Moore leads the team in scoring, averaging 18.6 points per game as of Jan. 18.

“Whenever you get to the free throw line, in time, you’re going to score points if you can make them,” Kampe said.

After losing several point guards to the transfer portal over the last year, Kampe said it was assistant coach Jeff Smith’s mission to find “the level of point guard that we have come to expect of [here at OU].” Kampe thinks he found one in Moore.

“I have a weird relationship with my point guards,” Kampe said. “I’m very hard on them, but they get the keys to the car. It’s a bumpy road when you’re first in that position and [Moore is] navigating that bumpy road pretty well. There’s still a lot to learn — a lot for him to get better at — and I really firmly believe he will.”