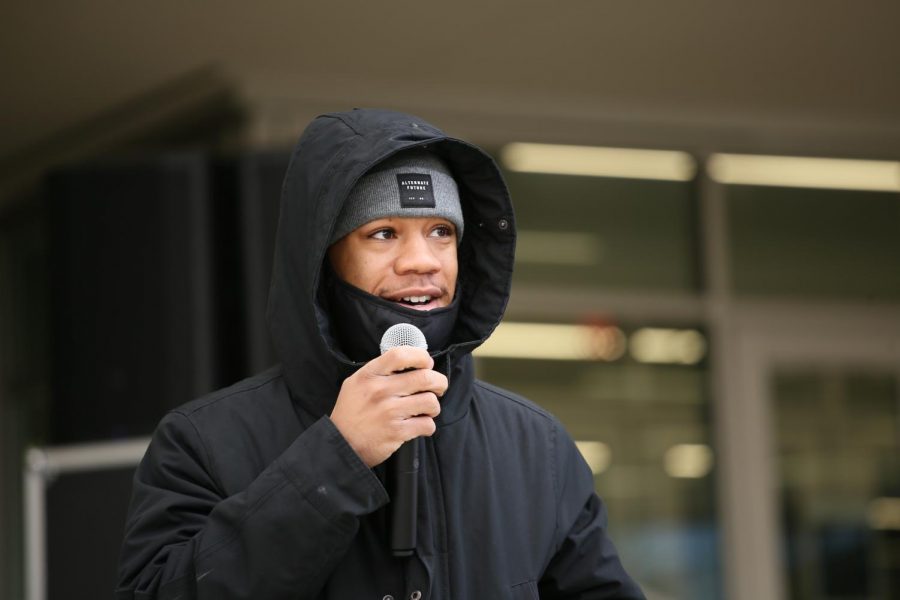 Sean King follows Jai Carrero's opening statements with additional remarks. Both spoke to the crowd before and after the march.

Leading a group of Black students at a primarily white institution (PWI) is difficult at any time, but Sean King became president of the Association of Black Students (ABS) at a pivotal time in history.

This summer, the world erupted as multiple videos and stories of unarmed Black people surfaced in an already tumultuous time. Ahmaud Arbery, George Floyd, Elijah McClain, Breonna Taylor and more became examples of a broken system in the summer of 2020.

This summer, King was also named president of ABS.

“I didn’t question the opportunity that I was placed in,” King said. “I have a firm belief that everything happens for a reason … I took the opportunity of being president to finally be that voice for people.”

King was a member of ABS for four years, first starting as the social media coordinator. He learned of the organization through the Center for Multicultural Initiatives (CMI).

Through CMI and ABS he met mentors, specifically CMI’s Senior Director Omar Brown-El. Brown-El used to be president of ABS, so when King was named president, he took it as a “huge honor.”

“There’s a lot of history within this organization,” King said. “CMI’s own Mr. Brown-El was the president of ABS at one time, there’s literally a picture from The Oakland Post of him being a student just like us leading a protest on campus.”

With the history of ABS, King acknowledged the weight his position holds.

“It’s bigger than just being the president of an organization because of what this organization has meant to Oakland University’s campus, specifically Black students,” he said.

King was drawn to Oakland, based on a feeling. After applying to Michigan State, Wayne State and OU, King appreciated how Oakland reached out to him first.

That propelled him to becoming a Golden Grizzly, and now the communication major is working to make campus a better place.

In the fall semester, King and Jai Carrero worked together to organize two protests. The first was in September for Black Lives Matter, and the second was two days before the election in an effort to get students voting.

Organizing rallies and marches for equality are actions that King feels are necessary at a PWI to bring prosperity to people of color.

“A huge part of the success of all students is the acknowledgement that this is not just a PWI, but we have Black students and people of color as well,” King said. “The first step to breaking down white privilege is to accept that it exists and focus on becoming an ally from there.”

ABS and Black Lives Matter OU (BLMOU) worked together to put on the protests, and King is thankful for BLMOU’s presence.

“With BLM, it helps us push out a statement of unity and solidarity,” King said. “It’s important for Black people to not let the space we encompass silence us.”

After a year of tragedies and protest, King saw progress from the OU community.

“The willingness to listen to ABS and its Black students has definitely been a step in the right direction,” he said.

Despite progress made, King still felt there is room for improvement in the university and the nation. Nearing the last semester of his degree, King wants to leave an impact to help future students of color.

“I want to be as loud as I can as president with the events we do and what we choose to speak on,” he said. “I feel that often, people aren’t listening to us, so I want to make sure people at Oakland and Michigan hear what we have to say.”

Specifically on campus, King would like to see more acknowledgement of inequity and marginalization.

“I would love for Oakland to bring more awareness to the fact that racism in itself is a crisis that needs to be addressed,” King said. “I personally come across some staff who are kind of questionable in their character regarding Black people. They do give professors and staff training, but this training should be the highest priority.”

After he graduates, King wants to start a non-profit organization to make an impact in people’s lives. He wants to be that “one person” to inspire someone to make change.

“I want to inspire people the same way people I came across when I was younger inspired me to become who I am now,” he said.