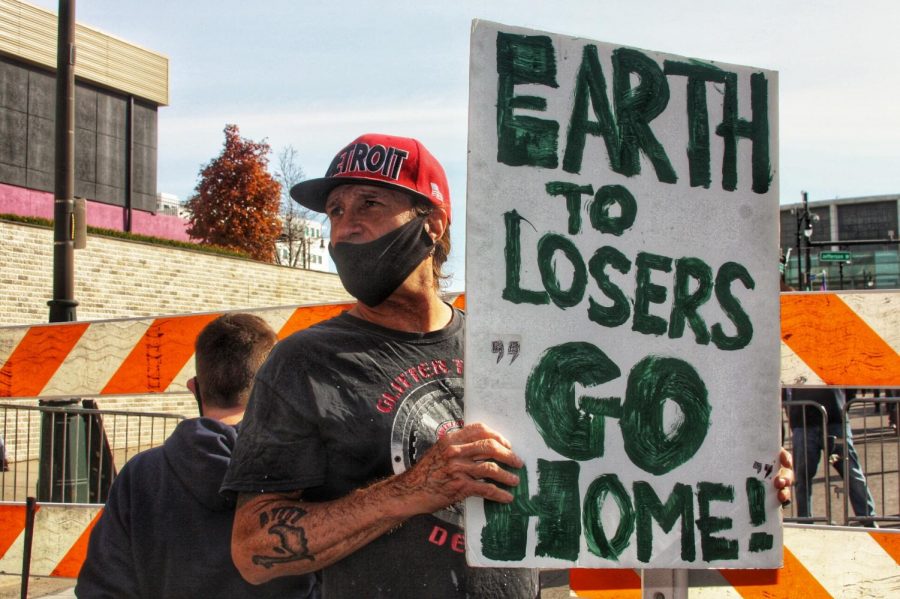 President-Elect Joe Biden won the state of Michigan Wednesday afternoon on Nov. 4, garnering a mixed reaction. The following days, supporters of President Donald Trump contested the vote count as those in favor of Biden rallied and celebrated the victory.

Outside the TCF Center (formerly the Cobo Center) on Friday, Nov. 6, hundreds of election opposers gathered mostly without masks and some with guns to protest the “voter fraud” occurring inside the counting center. Chats like “stop the steal” and “lock her up” (in reference to Gov. Gretchen Whitmer) spread across the crowd.

Although claims of Michigan voter fraud and following lawsuits were quickly disproven, those in attendance were sure something was amiss when the race was called for Biden.

Many pointed to the thousands of mail-in ballots that were processed later in the night on Tuesday and early Wednesday morning.

Genevieve Peters, 57, of Macomb voted absentee in California this past election, but believes this should not be an option for average citizens.

“We should have absentee [ballots] for our military — that’s what we’ve always had in the past — but everyone else, they have one day to be elected, and one day only to cast your ballot,” Peters said. “So, we believe this was all planned to be able to steal the election. And that’s what they did, but they’re not gonna get away with it.”

While many others in front of the TCF building shared similar views, Oakland University political science professor Cody Eldridge shed some light on the election process, confirming that many of these allegations were false. He also believes that distrust the crowd felt was misplaced.

“What’s also problematic here is that we’ve seen no evidence to back up any of these allegations about electoral malfeasance,” Eldridge said via email. “If there is, in fact, evidence of misconduct, it should be brought to light. But no one has furnished any credible evidence. We all need to agree, at a minimum, that our views on these kinds of questions need to be premised on facts and reality rather than conspiracy and hearsay.”

Many were chanting to stop the count, echoing the words of Trump himself. In addition to average Michigan citizens, members of white supremacy groups like the Proud Boys the Michigan Liberty Militia — who were linked to the plot to kidnap Whitmer — were also in attendance “because our freedom is at stake,” according to militia co-founder Phil Robinson.

One poll challenger, Chris Schornak, was allegedly escorted out of the TCF Center by three Detroit police officers after calling out supposed election fraud.

“When I came here on Wednesday to watch the ballots, I had to stop counting,” he said. “It was at least 8% of these ballots would come in, and they weren’t registered voters, they weren’t in the electronic log, they weren’t on the paper log. They were invalid votes, and there were thousands of them. Detroit cheats.”

Some counter protesters gathered to challenge the crowd. Among them was Scott Koskinen, 55, of Detroit, carrying a sign that said, “Earth to losers: Go home.”

“[I came here today] because Trump and his supporters are trying to subvert the will of the people and are trying to overthrow democracy,” he said.

After the election challengers angrily disputed votes at the TCF Center downtown, celebrations for the president-elect at the Detroit Department of Elections began the following day when Biden was declared the winner on Nov. 7. Groups like Detroit Will Breathe, Detroit Action, the Sunrise Movement and more organized a rally and march to protect votes.

“We want to make sure that Black, brown, Indigenous people throughout the state are being lifted up in their win and their hard work to make sure that their voices were heard and that they were able to vote for progress on the ballot,” said Brandon Snyder, 33, executive director of Detroit Action.

Slogans like “voters decided” and “count every vote” adorned signs and sweatshirts as people spoke, danced and chanted for Biden.

“I think it’s vital for people to remain patient, and to have faith in the integrity of our electoral system,” Eldridge said via email. “It’s remarkably robust, and fraud and malfeasance are virtually nonexistent. We run a tight ship, and we should be proud of that.”

Hundreds of Detroiters were a part of the crowd on Grand Blvd, ranging in age and ethnicity. Holocaust survivor and Detroit resident Rene Lichtman, 82, celebrated the victory over Trump carrying a sign saying “defend Black voices.”

“I’ve considered Trump a fascist since he first got elected,” he said. “It reminded me of the fascism that I experienced in Europe during the Second World War. So this is a victory, and I attributed in great, great part to the Black struggle against police brutality and in Detroit as well.”

Several local leaders stood in front of the crowd to talk about the Democratic win in the context of the Black Lives Matter movement, unions, education, prison reform and minority communities.

Nia Winston, 46, of Detroit and her daughter A’mya, 7, were among those who stood up to speak.

“We don’t just do this for ourselves, we do this for our children, and I am so thankful,” Nia Winston said. “We defended our democracy. All our votes were counted, and our voices were heard.”