Netflix’s ‘Holidate’ is nothing special 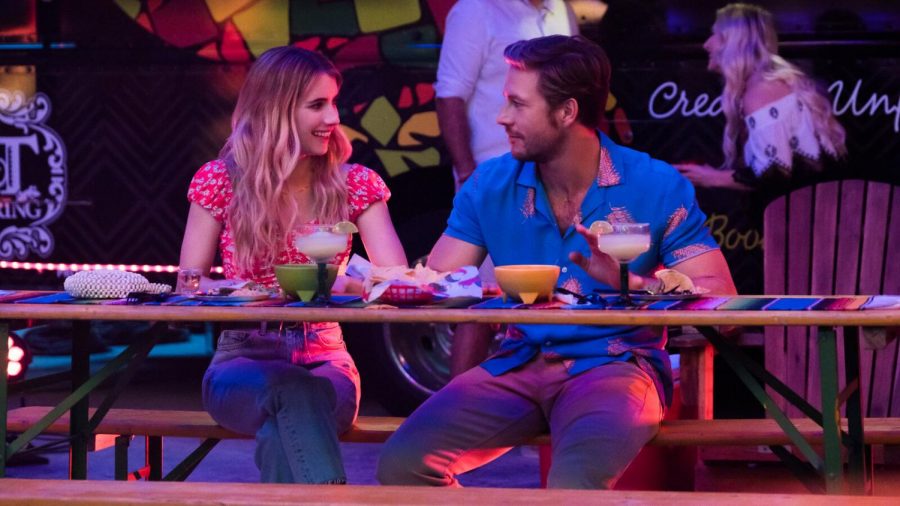 "Holidate" focuses on a make-shift holiday couple that turns into a real romance.

We’re plummeting right into the holiday season and along with it — holiday movies. With a title like Netflix’s “Holidate,” one would expect two hours of hot chocolate, sweaters and snow, but roughly 70% of “Holidate” took place completely outside of the holiday season.

Love interests Sloane (Emma Roberts) and Jackson (Luke Bracey) are single in Chicago and sick of taking on the holidays alone. After an eventful Christmas for both, they bump into one another at the mall, while returning gifts and decide to become “Holidates” — a no-strings-attached date to every holiday throughout the year.

The film spans an entire year as Sloane and Jackson take on holidays from Valentine’s Day to Cinco De Mayo, highlighting their growing connection along the way. Although they clearly like one another, Sloane is stuck up on her dreamy ex Luc (Julien Marlon Samani), and Jackson doesn’t seem ready for commitment. All the while, Sloane’s mother (Frances Fisher) continuously tries to hook her up with successful doctor Faarooq (Manish Dayal).

In a sense, the film lived up to its title, as nearly ‘every’ holiday was featured. The movie appeared to be an average-holiday-romantic comedy plot — an NYC public relations professional goes home to her quaint Christmas town to find out the Christmas tree farm, run by her high school sweetheart, is going under — but it wasn’t. The cozy-holiday-season vibes I was looking for were barely there, and it really didn’t feel like a romantic comedy because it wasn’t funny, and the characters were low-key rude.

For starters, there’s nothing I hate more than two love interests’ first interaction being a roast session at a swanky retail location, while they simultaneously decide they’re attracted to one another — it’s not normal. Call me old fashioned, but telling a love interest “stop following me” or “get away immediately” barely worked at 5th grade recess and not in your late 20s.

The plot was okay. It was somewhat creative — I’ve never heard the term “Holidate” before — but it didn’t reel me in. What’s more is the main characters weren’t likable. They always had an attitude and were dysfunctional.

At one point, Sloane took Jackson to the hospital after a fourth of July accident, and the two of them just got high, while waiting for the doctor. That’s not funny. It’s just two people being jerks.

A warning for anyone jumping into this film: there is an attempt at the “Dirty Dancing” lift. It worked with Ryan Gosling and Emma Stone in “Crazy Stupid Love,” we can’t all be Patrick Swayze.

“Holidate” just missed the mark. It wasn’t a cozy-holiday movie. The characters were rude, the plot wasn’t captivating and the jokes fell flat. The best thing about it was Sloane’s hair and makeup.