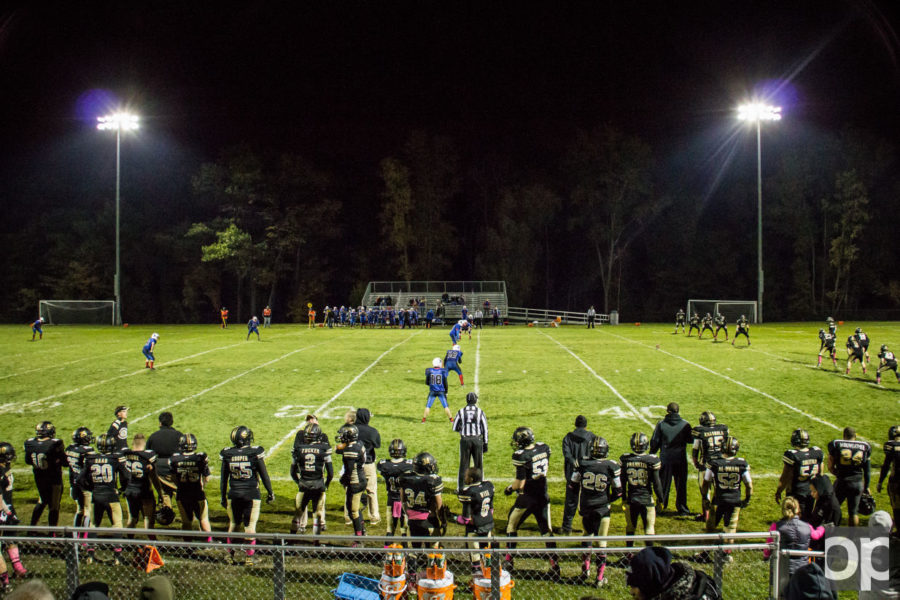 The Golden Grizzlies went wild in the first half of Saturday’s game, running out to a 37-0 lead at halftime.

The Golden Grizzlies club football team showed their teeth as they dominated the Blue Devils this past Saturday under the lights.

Oakland University cruised to a 50-8 victory over DePaul University on their way to their third win of the season. The victory gives OU a 3-0 record on the young season as the team still has five scheduled games left.

The conditions were not ideal. It was cold, rainy and the field was in terrible shape for most of the game. Players said they had to make some minor adjustments, but they still believed their game plan would work.

“The field was terrible after the first quarter, but you can’t really worry about it. You have to use the field that you have to get the win, so we could not let that get in the way of our goal,” Oakland defensive back Chilion Sims said.

“The offensive line was great and they all clicked,” Pettway said. “I think my running style is hard to defend because I get down field, get as many yards as I can, and don’t make cuts unless I know that they are there.”

The Golden Grizzlies led 13-0 after one quarter of play, but really put some separation between them and the Blue Devils in the second quarter. Three more rushing touchdowns and a late first-half field goal made it a 37-0 halftime lead for OU.

The second half started how the first half ended, with OU returning the opening kickoff for a touchdown. After that point, a running clock was used and the team was able to cruise to a 50-8 victory.

OU is now 3-0 on the season as they will travel to the University of Michigan-Flint for a road game on Saturday. This will be the first of four straight Great Lakes-East conference games for the Golden Grizzlies.

More information such as schedules, events and fundraisers can be found on the OU football club Facebook page, and on the team website http://oufootballclub.wix.com/footballclub.