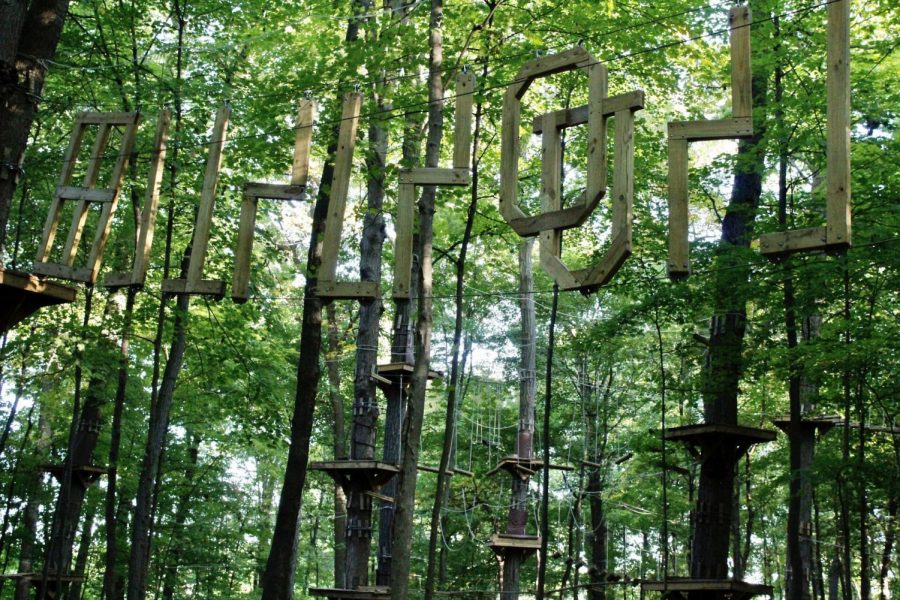 The TreeRunner park on campus has maintained operation with half capacity and increased safety measures.

TreeRunner Adventure Parks had to make significant changes to adapt to the COVID-19 pandemic, only in its second year of business on Oakland University’s campus.

Immediately after the pandemic gained ground in the U.S., TreeRunner increased their safety protocols, making employees wear masks before they were government mandated.

“A lot of our company is really young, and I think we all took it a bit more seriously because we all have family members we really care about,” said Amanda Nouhan, business manager of TreeRunner Adventure Parks.

“Right off the bat we established a task force among our administrative staff,” Nouhan said. “We were just making sure that we were being immediately updated with all of the news.”

The staff goes through a temperature check and fills out a Google form to make sure they’re safe to enter the park. They also wear masks, face shields and gloves to make sure if they have to help someone off an element there is no contamination. Platforms are the spaces between obstacles, and elements are the individual obstacles.

The Rochester park also cut their maximum capacity by half. During a typical climbing season, TreeRunner’s capacity is 400. Now, the park is limited to 200 climbers per day, and customers are not allowed to walk in and climb — climbing is by reservation only.

Sanitation is a major focus for TreeRunner, as well. Climbers use shared harnesses and gloves, which are frequently sanitized, and shared surfaces receive sanitation three times per day.

“We make sure all of our equipment — our clip system and harnesses are sprayed down between each use,” Nouhan said.

In addition to increased sanitation on elements, TreeRunner reduced the amount of people allowed on each element.

Typically, there are four people allowed on a platform at a time, and only one person per element. Platforms are the spaces between obstacles, and elements are the individual obstacles.

“This year it’s strictly one person [per element],” Nouhan said. “If you don’t know the people in front of you, it’s only one person on the platform.”

The park settled on a 70% alcohol solution for sanitation, which took some trial and error to find. The gloves, harnesses and wood elements need to be clean without being worn down from heavy alcohol-based solutions.

In the past, staffers would help climbers get their harnesses on and clips tight, but with social distancing in effect, assistance looks different at the park.

Staffers also regularly hold briefing stations to run through rules, regulations and how to climb safely. Typically, these briefing sessions would be within 15 minutes of each other.

Since TreeRunner does not want groups of people crossing paths too much, these briefing sessions are now spread out further.

Even though TreeRunner has been running at half capacity with increased rules and regulations, Nouhan said the park has been selling out every weekend.

“The past month, we’ve been sold out almost every weekend,” she said. “We’ve done really well this year. I think our teams worked really hard to make sure that our name has gotten out there, but also that we’ve taken this extremely seriously.”

The park will be open until at least Oct. 31, but depending on the weather, could be open further into November. The latest the park could be open is until Thanksgiving.

More information about TreeRunner, including hours, can be found on their website, treerunnerrochester.com.