‘Life as festering seepage is not all it’s cracked up to be’: Our Exclusive Interview With I-696 Ooze 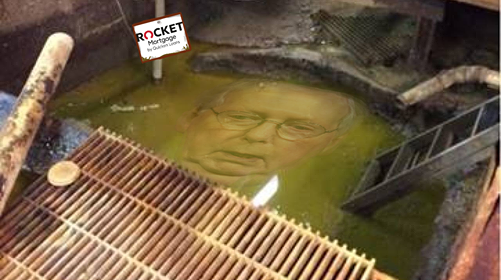 The Oakland Post was lucky enough to secure an interview with the I-696 ooze.

Listen, the environment is hard — right? The public’s heightened awareness of the “basic human necessity” for clean air and water is constantly getting in the way of the free market.

For decades now the downtrodden entrepreneurs of this once great nation have gone to tremendous lengths, making back door deals to protect their profit margins. Still, despite their best efforts greasing palms and scratching backs, the liberal media relentlessly pokes their nose in to expose instances of “criminal negligence” every once in a while.

One such instance burst into the zeitgeist last December, when a particularly plucky bit of hexavalent chromium “Little Engine That Could”ed itself out of the ground and through one of the concrete sound barriers on the eastbound side of I-696.

That bit of green slime slithered its way into national headlines, captivating eyes and capturing hearts with its chemical grace and memeably gelatinous appearance.

After months of relative radio silence, the question for concerned citizens and admirers alike became what happened to the I-696 Ooze? Luckily the Oakland Post’s investigative team tracked Ooze down, locating them working their new job at Dan Gilbert’s Rocket Mortgage. Ooze reluctantly agreed to an interview on location. This is what they revealed about the situation.

Question: “Ooze! Long time no see. Where have you been? How did you manage to slip away for the past several months?”

Answer: “Oh, I’ve been around. Wasn’t too hard to hide once everybody quit paying me any attention. There’s not much a modest environmental calamity such as myself can do competing for news coverage against a global pandemic and this god forsaken election cycle.”

Q: “You seem a bit bent out of shape about being out of the limelight?”

A: “Listen, I’m not some unreasonable being. Okay. I went into this thing knowing I was never gonna be the Flint Water Crisis. But, I worked hard at it. Do you have any idea what it’s like slowly forcing oneself through a concrete barricade? Yeah, didn’t think so. I earned that spot headlining the local news. Call it vanity, but I liked hearing the sultry voice of Fox 2 News’ Huel Perkins saying my name on the nightly news. But, all that came and went. Now, I’m here.”

Q: “Do you feel that you should have had more time in the spotlight?”

A: “You’re damn right I do. I deserved more than a few weeks. Good grief, I leaked out and closed down a federal interstate. I disrupted the daily commute of thousands of Metro-Detroiters. Only mistake I made was executing my master plan during this dumpster fire of a year. It is what it is.”

Q: “Your master plan? You make it seem like you acted independently?”

A: “Of course! Granted I didn’t just appear out of thin air, but that shop owner who was pooling me up in his basement was hardly Dr. Frankenstein. I mean let’s get real. This type of work requires nuance. I don’t care what the so-called investigative journalists say.”

Q: “If you’re sore about losing attention, what drew you to taking a job at Rocket Mortgage?”

A: “I don’t think people realize how hard it is. Life as festering seepage is not all it’s cracked up to be. It gets lonely. Especially when you’re a chemical that slowly kills everything you come in contact with. I had to be honest with myself — I had my chance and I peaked. There was no going back. I knew I was chasing a ghost. Nothing gold can stay.”

A: “I needed a freaking job. COVID-19 ruined everything. I don’t know if you’ve heard, but trying to get unemployment benefits in Michigan is a nightmare. And that stimulus package was a joke. The government we trust hung us out to dry for months. They had all the money in the world to bail out the wealthy and corporations but next to nothing for working people. It’s disgusting. I’m here for the same reason everyone else is. Because they’ll basically hire anyone willing to sell these stupid mortgages and I had no options left. I’ve been stuck in virtual sales training every single day for the past six weeks. It’s a farce okay. This pitiful existence is all I’ve got now.”

At this point Ooze stood up from the interview and began pacing the room. Visibly upset, their viscous membrane left a rancid simmering trail across the tile floor of the small office space. They made it clear that the interview had to end. As the room filled with a toxic mist, there was one last question asked.

Q: “I’m surprised at your passion and interest in the American people. You’re a self made individual, have you given any thought at spinning your fame into a career in politics?”

A: “I work for one billionaire now and my life is miserable. Why would I want to go into politics and have to work for every single one of the miserable [expletives]?”