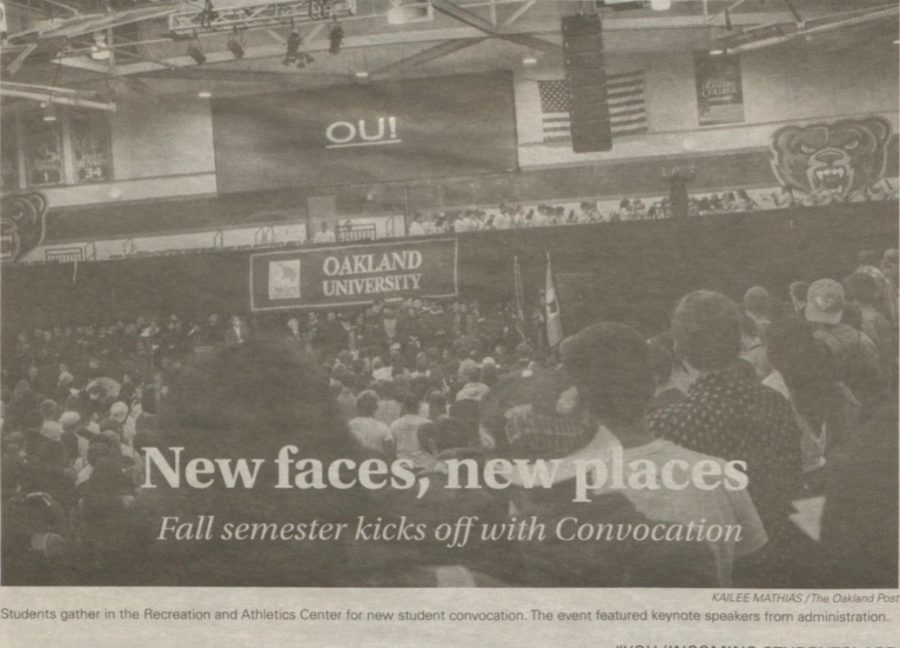 New students in 2013 we welcomed with a convocation with remarks from the president of the university. This year, the convocation will be held virtually. Photo courtesy of the Oakland Post archives.

In September of 2013, Oakland University held what is now an annual convocation to welcome incoming students before the academic year started.

The convocation featured eight speakers, along with videos and a chance to join in the singing of OU’s fight song.

“You [incoming students] are now a part of a community that is expanding and growing at an extraordinary level,” Michael Kramer, chair of the Board of Trustees, said. “At Oakland University we have a 22-to-1 student to faculty ratio. You are part of a close-knit educational group.”

The OU Student Congress (OUSC) Vice President at the time, Jibran Ahmed, opened the ceremony, saying, “We want to make your experience unique and enjoyable so you can look back in ten years and smile.”

The eight speakers spoke throughout the ceremony and welcomed the group of new additions with smiles. The speakers encouraged the freshman to take full advantage of all the opportunities at OU.

Harper welcomed the students to — what he called — “Monsters University.” He then tossed a monster hat into the crowd of students and began to explain the analogy.

“Freshmen, you are the scariest thing on this campus,” Harper said. “You’ve heard Hagrid of ‘Harry Potter’ was a giant, and you weren’t afraid. You listen to Imagine Dragons and probably sing along with them.”

He continued, reminding the students about the fearlessness of the university.

“Freshmen, like you, have monster ambitions and frightening potentials,” Harper said. “Just like you, this university does not fear, it never has.”

After each speaker, videos from graduates played. The graduates offered insights to the young freshman. The students were encouraged to take advantages and embrace their new surroundings.

Glenn McIntosh, the interim vice president for Student Affairs and Enrollment Management, discussed with the students their options for campus assistance. They had the option of 20 unique campus departments they could visit throughout their college career.

“Student affairs are ready to help anytime, anywhere — bring it on,” McIntosh said.

Once the ceremony ended, an involvement fair was held from  4-5 p.m. in the north side of the Oakland Center. Student organizations from around campus were showcased.

“You have come to the right place to make your dreams a reality,” Interim President Betty J. Youngblood said.

This fall, the convocation is all virtual because of COVID-19. It’s being held on Sept. 2 to kick off Welcome Week. Ora Hirsch Pescovitz, OU’s seventh president, will deliver remarks like she would if it was in person with the help of OUSC President Ethan Bradley.

Jean Ann Miller, the senior director of the Office for Student Involvement, spoke about the convocation.

More information about convocation and welcome week can be found on the OU website.