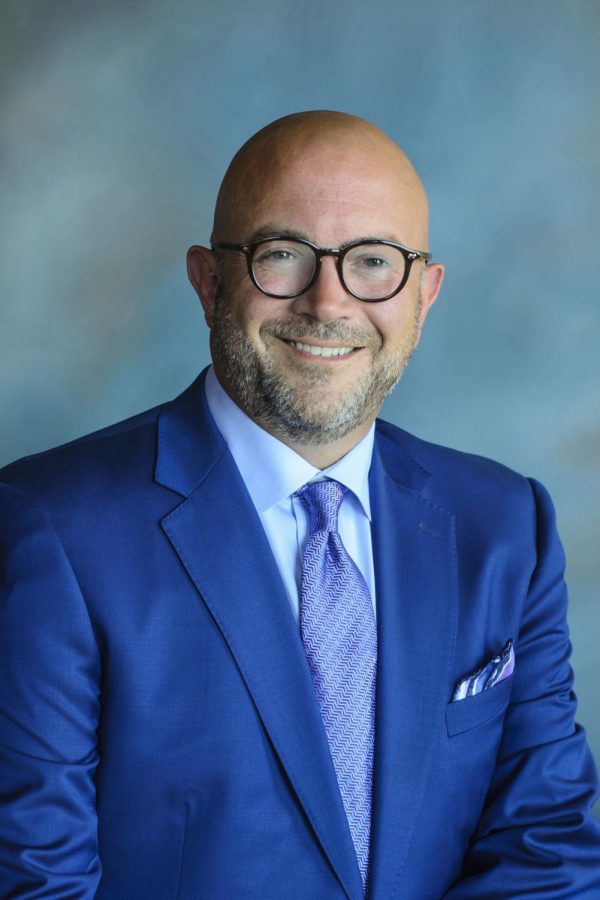 As a part of her vision in “Reimagining OU,” President Ora Hirsch Pescovitz wanted to add a new position to her cabinet: the chief of staff.

After a long hiring process, she decided on Dr. Joshua Merchant, who returned to his home state of Michigan. The decision to come back to the state was one centered on Merchant’s No. 1 priority — family. That family for Merchant is his wife, Carrie, and his two sons, Eli (18) and Griffin (14), whom he calls his “pride and joy.”

“Family is a big deal,” he said. “We made the decision that we’d been gone a while from Michigan. Life is short, and it was an opportunity to connect with family.”

As chief of staff, Merchant will oversee all staff in the office of the president. The position will evolve as time goes on, but is built to bring the plan of Reimagining OU to life by thinking of new and creative ways to grow the university.

Merchant has degrees from Albion College, Michigan State University and Western Michigan University. He has worked in higher education since the late ’90’s, most recently as the president of Buena Vista University.

What drew him to Oakland was the ability to utilize his talent and experience without the responsibility of being the president. He heard of the chief of staff job through a colleague, Berkley Browne, who works at The William Beaumont School of Medicine.

“I talked with her [Browne] … and it led me to apply for the position,” Merchant said. “The catalyst for me accepting the decision was President Pescovitz. I found her and her vision to be very compelling.”

After working for years in higher education across the country, Merchant feels he’s found a pathway that is more than a passion, but the field of higher education wasn’t always what he was headed toward.

“I started right after college working in marketing for Michigan Farm Bureau, and I never thought in a million years that I’d take an opportunity to work in higher education,” he said. “There was an opportunity at Michigan State, I was in my 20’s and thought ‘this could be an interesting opportunity.’”

Merchant found the field rewarding, which led him to work at multiple other institutions like Albion, Buena Vista, Central Michigan University and North Florida University.

“One of the things that draws me to institutions like OU is the opportunity for impact,” he said. “Good hard work and success really does impact students. You get that big school atmosphere but yet it’s still small enough where you get to know people.”

He believes that OU has such opportunity for impact due to the location.

With decades of experience in higher education, Merchant feels lucky to have found a career path and an employer that fits him.

“I feel like I got lucky,” Merchant said. “I am very fortunate to find a career path that, quite frankly, wasn’t a job. It became a calling.”