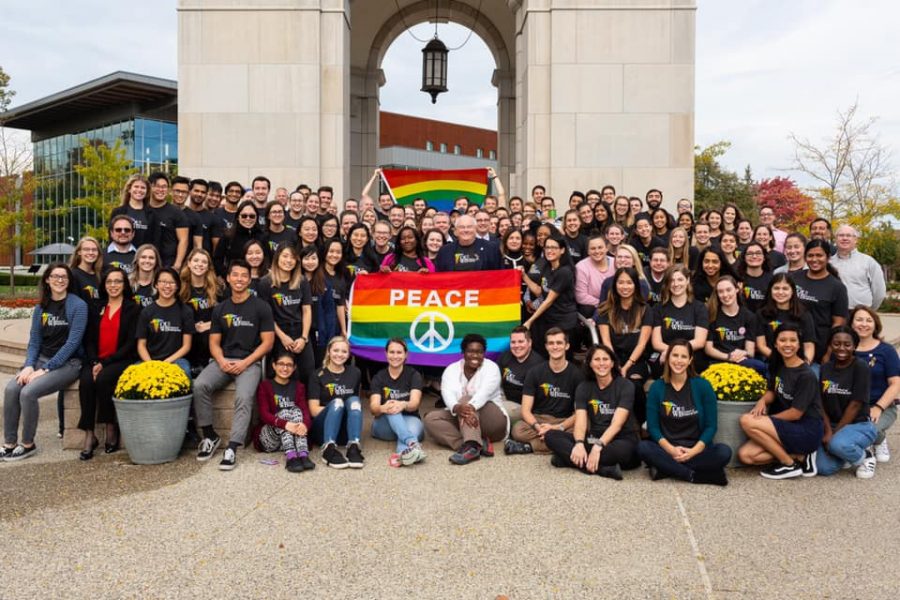 The OUWB students and staff in October 2019 in support of National Coming Out Day.

Key to the college experience is the freedom to be yourself. However some groups, such as the LGBTQIA+ community, are not always able to do so safely. A group of Oakland University William Beaumont School of Medicine (OUWB) students are making sure OU is known as a safe campus for everyone.

The Kaleidoscope Project is a student-lead intuitive allowing OUWB students and faculty to show their support for the LGBTQIA+ community. The project is an online list of signatories and their role within OUWB.

The project has been a goal of the OUWB student group Queers & Allies (Q&A) since around 2018.

According to Amelia Kruse, a Kaleidoscope Project founder, Q&A members saw how underrepresented LGBTQIA+ community was at OU and realized how Oakland County being a historically conservative area affected people’s ability to confidently speak up.

“A lot of the other members of [Q&A] had seen when they were applying to medical school that other schools had these sorts of lists,” Kruse said. “You could see the environment on campus and whether or not it was a welcoming environment and OUWB did not have that.”

Project founders reached out to medical schools with out and ally lists such as Yale and Stanford to find out what the process of making the list would be like. Privacy was one of the founders’ and faculty’s biggest concerns, citing incidents like when University of Michigan students were unable to remove themselves from the school’s out list when it was published.

Adding a name to the list requires filling out a short form asking for a name, a verification email address and the signer’s role within the OUWB community. The only information published to the list are the names and roles. Even so, filling out the form does not guarantee someone will be published on the site.

“There is a set of checks and balances as far as who gets published,” Victoria Roach, Q&A faculty advisor, said. “Individuals applying to be listed must maintain an affiliation with OUWB in some way; whether it be as a student, a resident, an employee of Beaumont Health, OUWB, OU or as alumni. OU faculty, staff and students interested in joining the list, are encouraged to do so by indicating their role as an OU community member.”

Since the project’s unveiling, the OUWB community responded with enthusiastic support.

“Within the first week over 100 people signed onto [the project],” Kruse said. “We sent out so many surveys in the months leading up to this … seeing who would be interested in this list, and we had an overwhelming positive response.”

As of July 2020, 118 OU and OUWB community members have applied to be added to the list, according to Roach.

By showing LGBTQIA+ students OU is a welcoming place, the Kaleidoscope Project is meant to serve as an example for the rest of the OU community.

“If we are not saying something, if we are not putting any message out there, then we are basically silencing ourselves,” Kruse said.