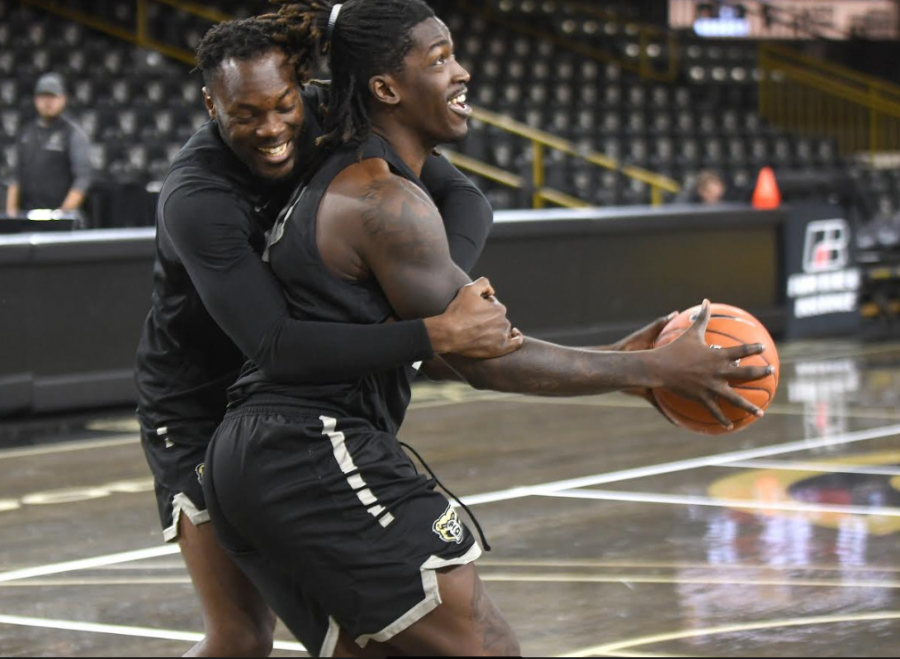 Courtesy of The Detroit News

On media day in the O'rena, Xavier Hill-Mais and teammate Dan Oladapo mess around while wrapping up shootaround.

For the past five years, Xavier Hill-Mais has been a constant on an Oakland University men’s basketball team that has seen many come and go.

Hill-Mais — known as “X” to Golden Grizzlies fans — was behind Oakland legends like Jalen Hayes and Sherron Dorsey-Walker for the first two years of his career.

When his junior year rolled around, he had a decision to make — either stay at OU and redshirt or look for opportunities elsewhere.

Hill-Mais decided to redshirt his third year on campus in order to gain more playing time and find his role once Hayes and Martez Walker graduated.

In his redshirt junior year, Hill-Mais took control of the OU offense, scoring 18.3 points per game and grabbing 7.2 rebounds per game. He earned Horizon League first team honors at the end of the year, solidifying himself as a top-five player in the league.

After the breakout year, he had another difficult decision to make. He saw teammates transferring to different places, putting OU in a position where in his final year, he would be sharing the floor with mostly younger players.

The thought of transferring did enter Hill-Mais’ mind, but ultimately he decided to stay where he was and finish out his collegiate career as a Golden Grizzly.

“At the end of the day, I thought about it and realized it was something I didn’t really want to do,” he said. “I don’t like bouncing around and I don’t like the idea of just picking up and leaving something, especially at the collegiate level.”

A year later, Hill-Mais doesn’t regret the decision to ride it out in the black and gold.

“I feel good, I felt good minutes after I decided that I was going to stay,” he said. “These were things I didn’t even think about for more than one day. Every decision I made at Oakland — I stand by it. I don’t live with any resentment or anything.”

In his senior year, Hill-Mais scored 16.9 points per game and improved his rebounding, pulling down 8.1 rebounds per game. He also led the team in blocks, sending back 45 shots in total.

Hill-Mais came into the program with fellow big man Brad Brechting, and the two followed a similar arc. Both redshirted their third year and broke out the next season. Brechting redshirted due to a foot injury, but both took their leap in 2018-2019.

The two also graduated together, were the only two seniors on their senior night and were the centerpieces of the team from 2018-2020.

“We matured as men together,” Hill-Mais said. “We dealt with the same situations, we kind of developed a respect for each other that helped us understand one another. In the end, that’s all you can really ask for is mutual understanding and respect.”

With his collegiate career behind him, Hill-Mais is looking to play professionally overseas. After spending five years in Michigan, he is looking for somewhere with some better weather, but is open to any location.

Hill-Mais is graduating with a degree in graphic design, something that he hopes to combine with his professional playing career.

“The main thing for me right now is to make sure I have a job playing basketball and then after that I can try to incorporate my graphic design, and get some of my stuff out there,” he said. “That’s something I definitely want to do — keep designing and finding things available for me.”

Over five years of his life, Hill-Mais has performed in front of thousands of fans. He has been one of the most outspoken players about the student section and fans, consistently thanking them and complimenting them in post-game interviews.

He believed the fans and atmosphere in the O’rena is something he will miss in the next chapter of his life.

“I think playing at Oakland is a different experience than any other gym, it’s a whole immersive experience,” he said. “If you take five steps out of bounds, the fans are right there. Oakland does a great job with having that immersive experience. It’s a place where basketball is meant to be played.”

Fans saw Hill-Mais on the court, but after the final buzzer sounded, Hill-Mais and his teammates created bonds off the court as well.

From making friends in class to grabbing food with his teammates, those bonds are what Hill-Mais said he will miss the most.

“I will always treasure those memories,” he said. “They are good memories, but I also keep in touch with the guys that played here, so we just keep talking. That’s what I will cherish the most — those relationships that still haven’t ended — and I think I’ll always be grateful for that.”