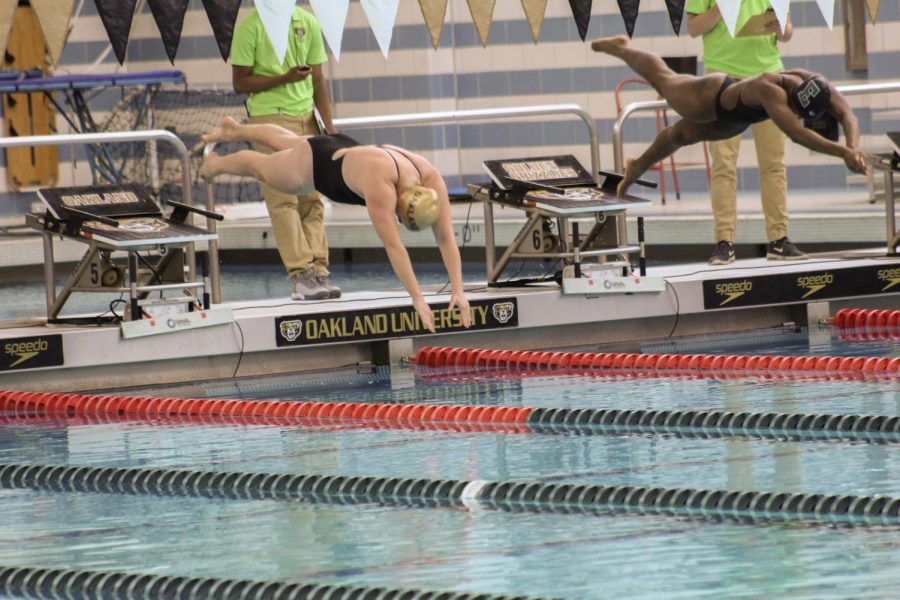 The Horizon League suspended competition indefinitely on Thursday, March 12. The season ended early for spring athletes and the swim team, which was competing in the College Swimming and Diving Coaches Association of America (CSCAA) National Invitational.

The National Collegiate Athletics Association (NCAA) announced the closure of tournaments, including the men’s and women’s basketball tournaments. The swim team was set to compete in the NCAA swim tournament, but all NCAA championships are canceled.

“I think some [athletes] just wanted to get home and focus on the academic work for the rest of the semester,” Oakland University Athletic Director Steve Waterfield said. “Some international students were worried that they couldn’t get home.”

After competition was canceled initially, the NCAA has discussed giving spring athletes a waiver for two semesters of eligibility due to the coronavirus outbreak.

“I hope that provides at least a little bit of solace,” Waterfield said. “The NCAA came out and said they will recommend relief in the form of a waiver. [That says] if they had used a year of eligibility so far in spring sports that they would get that year back.”

According to Waterfield, financial aid will be an important factor in how the NCAA implements the waivers, since some coaches offer financial support to future student athletes thinking that a senior will vacate a roster spot.

Since the initial decision, Waterfield had conversations with other Horizon League athletic directors about the future of spring sports. After deliberation, the league decided to cancel the spring seasons all together.

One of the first OU coaches to cancel activities was Eric Pogue, head coach of men’s soccer. Pogue took to Twitter to announce the spring season was canceled for men’s soccer.

“Due to COVID-19 threat & the immediate safety of our student-athletes, coaches, staff, fans; Oakland men’s soccer spring games are indefinitely suspended,” he wrote. “We’ll look at potential spring dates if the safety of our student athletes isn’t compromised and suspension of games is lifted.”

Individual coaches can determine their practice schedule, but all competitions and events over 50 people will not take place. This includes the Black and Gold Awards, the annual awards show the athletics department puts on in April every year.

The closest thing that Waterfield has seen to the COVID-19 outbreak is the 9/11 attack in 2001, during which, he was working at Ohio State as an assistant compliance director. Events happened shortly after the initial attacks in 2001, but this is a different situation with full cancellations instead of postponements.

“The key is to communicate and figure out how to best approach it here,” Waterfield said. “The starting point is what’s best for our student athletes. The closest thing I can relate this to is 9/11, but activity resumed sooner than later. There’s no real date that we know of where things will just be business as usual.”

As a sports fan and athletic director, Waterfield has seen the effect of the cancellations on himself and student athletes.

“It’s been disappointment, shock and surprise of how quickly this happened,” he said. “It’s bizarre as a sports fan, I miss watching all of these games. You start catching up on ’30 for 30’s on ESPN and watching old games that you remember.”

More updates on OU Athletics can be found on goldengrizzlies.com as well as The Oakland Post.