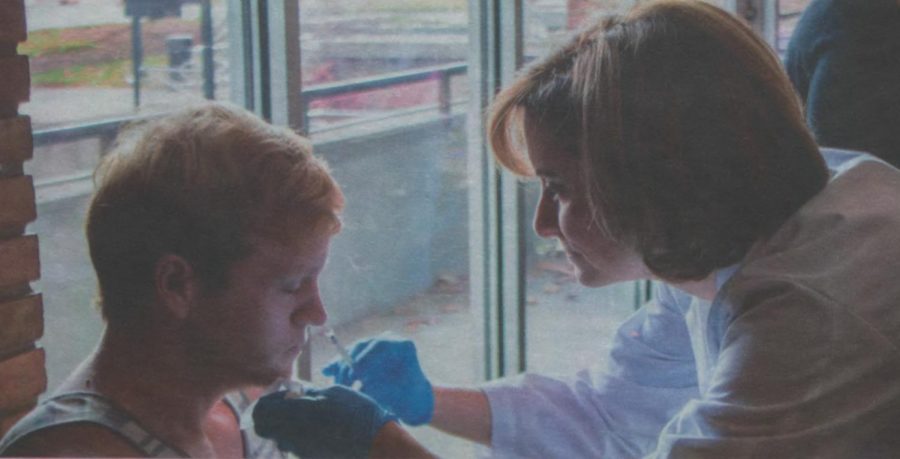 Students line up to receive flu vaccines at the Graham Health Center’s Fluapalooza event. The first 50 vaccines were free.

As the COVID-19 pandemic continues to ravage the world today, Oakland University has faced different epidemics threatening the health and wellbeing of students and faculty with the annual flu, the H5N1 avian flu and the Ebola virus.

While the university didn’t see closures or cancellations like it does today, many were concerned with the possibility of Ebola reaching the United States in November 2014, as it had been spreading across the world after its first discovery in West Africa.

While COVID-19 has caused a frenzy unlike any other in recent history, similar panic fell among the public in 2014. Amid the hysteria, a Graham Health Center (GHC) Adult Nurse Practitioner, Samantha Damren, told the OU community to remain calm.

“I have to stress that I am very unconcerned about Ebola migrating to the metro Detroit area,” Damren said. “I don’t think it’s beyond the realm of possibility, but it’s something that I’m not particularly scared of.”

While Ebola was not a real concern of healthcare professionals, the annual flu was.

“The flu happens every single year,” Damren said. “It’s highly contagious. It’s easily disseminated. It’s droplets, you know? Sneezing. Being on a plane with someone. Being in a movie theater.”

Back in October 2005, the H5N1 avian flu threatened to reach a nationwide outbreak after originating in Asia. Unlike COVID-19, which cannot be passed to and from animals, the avian flu was passed to humans from infected birds. Despite the avian flu being unable to pass from human to human at the time, professionals were concerned about the “smart-strain’s” ability to mutate in order to become more contagious.

“The concern is that if it develops the ability to go person to person, this could go around killing millions of people,” said Gabrielle Stryker, assistant professor of biological sciences. “[But] there’s no reason to believe that this is the year that it can go person to person.”

The spread of the avian flu was even more uncontrollable than COVID-19, as changing flight patterns of infected birds was the main carrier of the virus, whereas all carriers of today’s epidemic are human.

Also unlike COVID-19, H5N1 did not reach official “pandemic” stage in the U.S., but many were still worried about the possibility of it doing so. Because of this, many healthcare professionals planned for the worst-case scenario.

“Do we have the skills to handle something like this? Yes. Public health is about emerging diseases,” said George Miller, spokesman for Oakland County’s health department.

At the time, the state and local action plans were based off of other epidemics that have hit the area, such as the severe acute respiratory syndrome (SARS) in the early 2000s.

Neither Ebola nor H5N1 had ended up reaching Oakland County like COVID-19 has, and the mass hysteria is unlike any in recent history. While the 3-4% mortality rate of today’s epidemic is lower than both Ebola (50%) and the avian flu (60%), the public concern is unprecedented.

As Frank Bruni wrote in a 2014 New York Times op-ed titled “Scarier Than Ebola,” “We Americans do panic really well.”