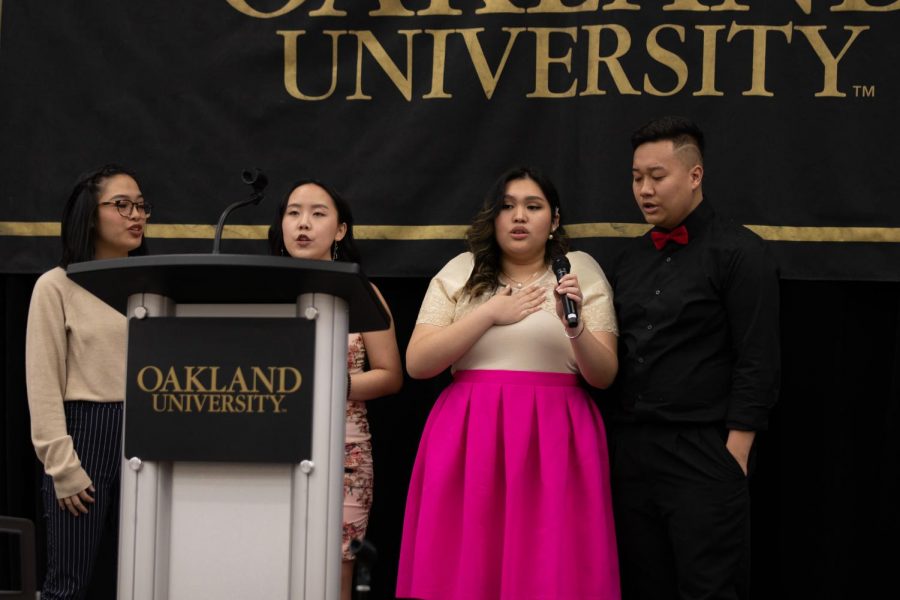 Harana traditionally involves a young male suitor performing a love song under a single woman’s window at night. Whether alone or accompanied by other suitors, the goal of Harana is to get the woman to come to the window and invite the suitor in to talk with her and her father.

“In the Filipino culture, courting is different than in America in that you try to be really formal and respectful at the same time they are trying to attract the woman,” FASOU President Alfred-Jason Lava said. “It is a great image, I think, of actually devoting yourself to someone [through Harana].”

Mac shared her own Harana experience with the room.

“I was barely 15 in high school in the mid-’50s,” she said. “If you had a crush on somebody … [the boys] would gather some of their friends and in the night when the moon is full … All of a sudden you would hear somebody singing by the window. My parents were very strict, so if there were Haranistas singing they would never open the windows, but I would manage to peek and see if there was a boy I like.”

Since the topic of the night was Harana, many of the performances had a “love” theme. Included in these performances were Christy Villalonga and Maxine Gungab singing Frank Sinatra’s “Fly Me to the Moon,” musician Jalen Harold singing Allen Stone’s “Give You Blue” and FASOU’s traditional dance team performing the “Paypay de Manila,” “Sakuting” and “Cariñosa.”

Between each of the musical and dance acts, a play about a Filipino student named Daniel trying to court fellow student Renee was performed with the scenes connecting the performances.

According to Lava, FASOU started in 2018 as a way for OU students to meet up and celebrate Filipino culture.

“Most other schools like Michigan State, Wayne State, University of Michigan and schools all over the country all have Filipino student associations,” Lava said. “The founders really wanted a community like that over at Oakland University.”

Since the club’s founding, it has grown to 40 registered members on Engage and has participated at events around Michigan and the Midwest through monthly meetings and attending conferences like the traditional dance competition Battle of the Bamboo, which was held at the University of Illinois-Chicago.

Similar Filipino student organizations from Eastern Michigan University, the University of Michigan and U of M-Dearborn, Michigan State and Wayne State attended this year’s Ang Aming Harana at OU.

FASOU also collected donations through the night for the Liyang Network, an organization that raises awareness for and helps in the fight for the rights of indigenous Filipino communities.