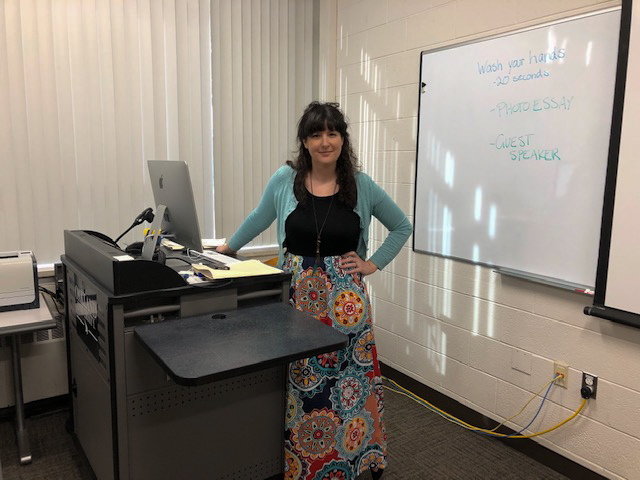 Katherine Roff, visiting assistant professor in the journalism department, has worked with newspapers and media companies in various countries, including New Zealand and Costa Rica.

The newest addition to Oakland University’s journalism department comes from the other side of the globe.

Katherine Roff, a visiting assistant professor in the department, always had an interest in journalism. She started with her studies in Perth, West Australia’s capital. Her undergraduate was a double degree in cultural studies and journalism.

Like serendipity, she never actually decided that she wanted to practice and teach journalism.

“They both kind of found me,” she said. “I was always passionate about media, so that’s why I took journalism classes, and I enjoyed them when I was at university. That was something that resonated with me, it was a good fit, and once you start in that world, things seem to snowball. One opportunity leads to another, and sooner or later you find yourself a professional journalist without ever actually deciding that was your calling.”

According to Roff, her mentors — especially her female mentors — were important in inspiring her to go into teaching and journalism.

“It’s very important, I think, to see yourself reflected in the people you hold up as icons,” she said.

After her university degrees were completed, Roff took her diploma of education and went straight into teaching from there.

Since then, she has always been teaching in some way — first with English as a second language overseas in Costa Rica and Thailand, and later teaching at high schools and at universities during her master’s program.

Roff loves to travel and has lived in different parts of the world. She has lived in New Zealand, Costa Rica, Thailand, Vienna and Austria, and she was still traveling in between.

“I really enjoy getting to know new cultures, and getting to attempt to learn languages is always fun,” she said.

Moreover, she thinks traveling can make journalists, and people in general, better.

“I think traveling makes us better people and it’s not necessarily the travel, but the cross-cultural experience — the ability to understand someone else’s perspective, someone else’s culture and to empathize with that is very powerful,” she said. “You just can’t help but to change the way you look at the world.”

Throughout her travels, she has gained experience in journalism; she was the editor for her university’s newspaper, she worked on a small town newspaper in New Zealand; at APN News and Media, which is New Zealand’s largest media company; and at the New Zealand Herald, the national paper. Currently, she is an editor of a local paper called Peace News.

In Costa Rica, she worked on The Tico Times — one of the only English newspapers there.

Her favorite parts of journalism are traveling and constant learning.

“I’m yet to write a story in which I haven’t learned something as well,” she said.

Roff and her family moved here almost four years ago. Her husband, who is originally from Michigan, joined his family’s brewery business, and she said that was what tempted them to come back.

Previously, she taught media classes in New Zealand, she said she’d love to continue to work at OU, and she’s really enjoying her time here.

She had been familiar with OU and doesn’t live far from campus, so many of the people she has encountered have attended or are affiliated with OU in some way. From that, she heard good things about the school.

“I feel very fortunate to have landed in an amazing department,” she said.