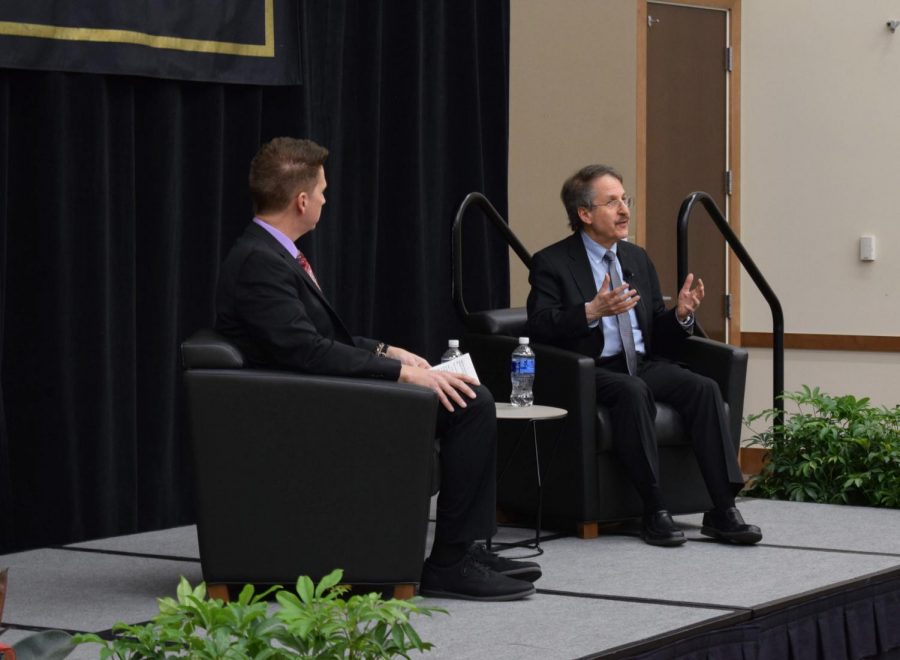 A hush fell over Oakland University students and faculty on Wednesday, March 4 as author and Chicago Tribune journalist Howard Reich recounted the unnerving feeling of stepping into Dubno, Ukraine — a city frozen in time after a mass execution of the Jewish population during World War II where only few survived. Reich’s mother was one of those few.

Reich found himself on this journey into his family’s history when his mother, Sonia, ran out of her house on Feb. 15, 2001 in a panic. She ran through the streets of Reich’s hometown of Skokie, Illinois, just outside of Chicago, fearing for her life from an invisible threat. After police picked her up and returned her to a relative’s home, and a psych evaluation gave inconclusive results, Reich set out to find what really caused his mother’s outburst, and if it was tied to her childhood as a European Jew in Nazi-occupied Poland, now present-day Ukraine, 60 years ago.

“She was running for her life,” Reich said. “It took a while to figure out she was really retracing the steps of her childhood because she spent her childhood during the height of the Holocaust running and hiding, and she was doing this again.”

The child of two Holocaust survivors, Reich spent the majority of his life in the dark as to what really happened to his parents all those years ago.

“My generation, our generation, did not get kind of a comprehensive or, at least, coherent expression of what happened,” Reich said. “We have fragments, we have pieces, little pieces, that we can’t quite put together, or as a friend of mine who is a child of survivors puts it, she says, ‘We knew, and we didn’t know.’”

After the 2001 incident, however, Reich became determined to find out his parents’ stories. Already an established music critic at the Chicago Tribune, Reich talked to his editors, and the road to his original article “Prisoner of Her Past” — which was expanded into a book and documentary of the same title — began.

The story took Reich through his parents’ past, from the residence in Skokie where his mother lived alone after his late father’s passing to Ukraine, and ultimately to the front door of Elie Wiesel, Holocaust survivor, Nobel laureate and author of the book “Night.”

Wiesel took an immediate liking to Reich, and the two connected over their shared history colored by the horrors of the Holocaust. They spent the next four years, which were ultimately the last of Wiesel’s life, collaborating on Reich’s newly released book, “The Art of Inventing Hope.”

“We spoke for just a few minutes, four minutes or so, and he said, ‘I want to show you something,’” Reich said. “He … went to his desk and pulled out a little tablet of paper, a yellow tablet of paper. He said to me, ‘I have never shown this to anyone on the outside, surely to no journalist.’ It was a document from his past that recently had resurfaced — it was his writings, in Hebrew, on mysticism and Jewish prayer written when he was 13 on the year of his bar mitzvah.”

This instant trust between Reich and Wiesel allowed them to dive deep into many topics about their pasts and how it has shaped their lives. Reich looked to Wiesel for commentary on politics, religion, the future and the world as he saw it.

“He told me that his job is to teach the the art in inventing hope where there is no hope,” Reich said. “He was one of the most hopeful, positive, optimistic, poetic people I think I have ever known. Anything I would say, he would find a positive way of looking at it, which was remarkable.”

Wiesel shared with Reich his theories of “active pessimism,” which is pessimism that moves someone into action. Wiesel explained that while he was inherently pessimistic about the way the world was turning, he felt a stronger obligation to inspire change.

Reich had spent the last two days at OU speaking in classrooms and talking to students, many of which were concerned, as he was, with how to go about making change. There was no way to change the past for these people, but as Wiesel said, “forgiveness is not relevant, not forgetting is relevant. Only the dead can give forgiveness.”

Reich often expressed how he felt that there were no words to describe the horrors of the history he discovered, but despite that, he continued searching and encouraged others to do the same, telling students to “read and speak, speak out.”

If interested in learning more and helping to continue the story, visit OU’s own Cis Maisel Center for Judaic Studies and Community Engagement to get involved.